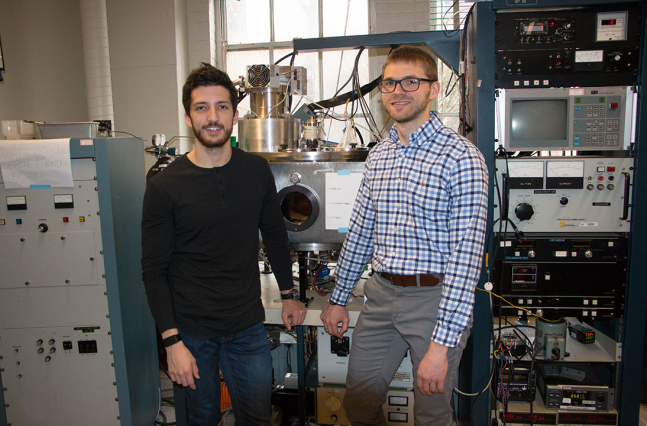 Lucas Caretta (left) and Ivan Lemesh, graduate students in the lab of MIT professor of materials science and engineering Geoffrey Beach, each had a cover article in a peer-reviewed journal article in December. Their work is pioneering new directions for spintronic devices based on quasi-particles known as skyrmions. Image: Denis Paiste/Materials Research Laboratory.

For many modern technical applications, such as superconducting wires for magnetic resonance imaging, engineers want as much as possible to get rid of electrical resistance and its accompanying production of heat.

It turns out, however, that a bit of heat production from resistance is a desirable characteristic in metallic thin films for spintronic applications such as solid-state computer memory. Similarly, while defects are often undesirable in materials science, they can be used to control creation of magnetic quasi-particles known as skyrmions.

In separate papers published this month in the journals Nature Nanotechnology and Advanced Materials, researchers in the group of MIT Professor Geoffrey S.D. Beach and colleagues in California, Germany, Switzerland, and Korea, showed that they can generate stable and fast moving skyrmions in specially formulated layered materials at room temperature, setting world records for size and speed. Each paper was featured on the cover of its respective journal.

For the research published in Advanced Materials, the researchers created a wire that stacks 15 repeating layers of a specially fabricated metal alloy made up of platinum, which is a heavy metal, cobalt-iron-boron, which is a magnetic material, and magnesium-oxygen. In these layered materials, the interface between the platinum metal layer and cobalt-iron-boron creates an environment in which skyrmions can be formed by applying an external magnetic field perpendicular to the film and electric current pulses that travel along the length of the wire.

“After developing a number of theoretical tools, we now can not only predict the internal skyrmion structure and size, but we also can do a reverse engineering problem, we can say, for instance, we want to have a skyrmion of that size, and we’ll be able to generate the multi-layer, or the material, parameters, that would lead to the size of that skyrmion,” says Ivan Lemesh, first author of the Advanced Materials paper and a graduate student in materials science and engineering at MIT. Co-authors include senior author Beach and 17 others.

A fundamental characteristic of electrons is their spin, which points either up or down. A skyrmion is a circular cluster of electrons whose spins are opposite to the orientation of surrounding electrons, and the skyrmions maintain a clockwise or counter-clockwise direction.

“However, on top of that, we have also discovered that skyrmions in magnetic multilayers develop a complex through-thickness dependent twisted nature,” Lemesh said during a presentation on his work at the Materials Research Society (MRS) fall meeting in Boston on Nov. 30. Those findings were published in a separate theoretical study in Physical Review B in September.

The current research shows that while this twisted structure of skyrmions has a minor impact on the ability to calculate the average size of the skyrmion, it significantly affects their current-induced behavior.

For the paper in Nature Nanotechnology, the researchers studied a different magnetic material, layering platinum with a magnetic layer of a gadolinium cobalt alloy, and tantalum oxide. In this material, the researchers showed they could produce skyrmions as small as 10 nanometers and established that they could move at a fast speed in the material.

“What we discovered in this paper is that ferromagnets have fundamental limits for the size of the quasi-particle you can make and how fast you can drive them using currents,” says first author Lucas Caretta, a graduate student in materials science and engineering.

In a ferromagnet, such as cobalt-iron-boron, neighboring spins are aligned parallel to one another and develop a strong directional magnetic moment. To overcome the fundamental limits of ferromagnets, the researchers turned to gadolinium-cobalt, which is a ferrimagnet, in which neighboring spins alternate up and down so they can cancel each other out and result in an overall zero magnetic moment.

In 2017, researchers in Beach’s group and their collaborators demonstrated experimentally that they could create these quasi-particles at will in specific locations by introducing a particular kind of defect in the magnetic layer.

“You can change the properties of a material by using different local techniques such as ion bombardment, for instance, and by doing that you change its magnetic properties,” Lemesh says, “and then if you inject a current into the wire, the skyrmion will be born in that location.”

Adds Caretta: “It was originally discovered with natural defects in the material, then they became engineered defects through the geometry of the wire.”

They used this method to create skyrmions in the new Nature Nanotechnology paper.

The researchers made images of the skyrmions in the cobalt-gadolinium mixture at room temperature at synchrotron centers in Germany, using X-ray holography. Felix Büttner, a postdoc in the Beach lab, was one of the developers of this X-ray holography technique.

“It’s one of the only techniques that can allow for such highly resolved images where you make out skyrmions of this size,” Caretta says.

These skyrmions are as small as 10 nanometers, which is the current world record for room temperature skyrmions. The researchers demonstrated current driven domain wall motion of 1.3 kilometers per second, using a mechanism that can also be used to move skyrmions, which also sets a new world record.

Except for the synchrotron work, all the research was done at MIT.

These skyrmions are one type of spin configuration of electron spins in these materials, while domain walls are another. Domain walls are the boundary between domains of opposing spin orientation. In the field of spintronics, these configurations are known as solitons, or spin textures.

Since skyrmions are a fundamental property of materials, mathematical characterization of their energy of formation and motion involves a complex set of equations incorporating their circular size, spin angular momentum, orbital angular momentum, electronic charge, magnetic strength, layer thickness, and several special physics terms that capture the energy of interactions between neighboring spins and neighboring layers, such as the exchange interaction.

One of these interactions, which is called the Dzyaloshinskii-Moriya interaction (DMI), is of special significance to forming skyrmions and arises from the interplay between electrons in the platinum layer and the magnetic layer.

In the Dzyaloshinskii-Moriya interaction, spins align perpendicular to each other, which stabilizes the skyrmion, Lemesh says. The DMI interaction allows for these skyrmions to be topological, giving rise to fascinating physics phenomena, making them stable, and allowing for them to be moved with a current.

“The platinum itself is what provides what’s called a spin current which is what drives the spin textures into motion,” Caretta says. “The spin current provides a torque on the magnetization of the ferro or ferrimagnet adjacent to it, and this torque is what ultimately causes the motion of the spin texture. We’re basically using simple materials to realize complicated phenomena at interfaces.”

In both papers, the researchers performed a mix of micromagnetic and atomistic spin calculations to determine the energy required to form skyrmions and to move them.

“Precise control of creating magnetic skyrmions is a central topic of the field,” says Jiadong Zang, an assistant professor of physics at the University of New Hampshire, who was not involved in this research, regarding the Advanced Materials paper. “This work has presented a new way of generating zero field skyrmions via current pulse. This is definitely a solid step towards skyrmion manipulations in nanosecond regime.”

Commenting on the Nature Nanotechnology report, Christopher Marrows, a professor of condensed matter physics at the University of Leeds in the United Kingdom says: “The fact that the skyrmions are so small but can be stabilized at room temperature makes it very significant.”

Marrows, who also was not involved in this research, noted that the Beach group had predicted room temperature skyrmions in a Scientific Reports paper earlier this year and said the new results are work of the highest quality.

“But they made the prediction and real life does not always live up to theoretical expectations, so they deserve all the credit for this breakthrough,” Marrows says.

Zang, commenting on the Nature Nanotechnology paper, adds: “A bottleneck of skyrmion study is to reach a size of smaller than 20 nanometers [the size of state-of-art memory unit], and drive its motion with speed beyond one kilometer per second. Both challenges have been tackled in this seminal work.

“A key innovation is to use ferrimagnet, instead of commonly used ferromagnet, to host skyrmions,” Zang says. “This work greatly stimulates the design of skyrmion-based memory and logic devices. This is definitely a star paper in the skyrmion field.”

“In these materials, we can readily pattern magnetic tracks,” Beach said during a presentation at MRS.

“One can engineer by putting notches in this type of system,” said Beach, who also is co-director of the Materials Research Laboratory (MRL) at MIT. A current pulse injected into the material forms the skyrmions at a notch.

“The same current pulse can be used to write and delete,” he said. These skyrmions form extremely quickly, in less than a billionth of a second, Beach says.

“To be able to have a practical operating logic or memory racetrack device, you have to write the bit, so that’s what we talk about in creating the magnetic quasi particle, and you have to make sure that the written bit is very small and you have to translate that bit through the material at a very fast rate,” Caretta says.

Marrows, the Leeds professor, adds: “Applications in skyrmion-based spintronics, will benefit, although again it’s a bit early to say for sure what will be the winners among the various proposals, which include memories, logic devices, oscillators and neuromorphic devices.”

A remaining challenge is the best way to read these skyrmion bits. Work in the Beach group is continuing in this area, Lemesh says, noting that the current challenge is to discover a way to detect these skyrmions electrically in order to use them in computers or phones.

“Yea, so you don’t have to take your phone to a synchrotron to read a bit,” Caretta says. “As a result of some of the work done on ferrimagnets and similar systems called anti-ferromagnets, I think the majority of the field will actually start to shift toward these types of materials because of the huge promise that they hold.”