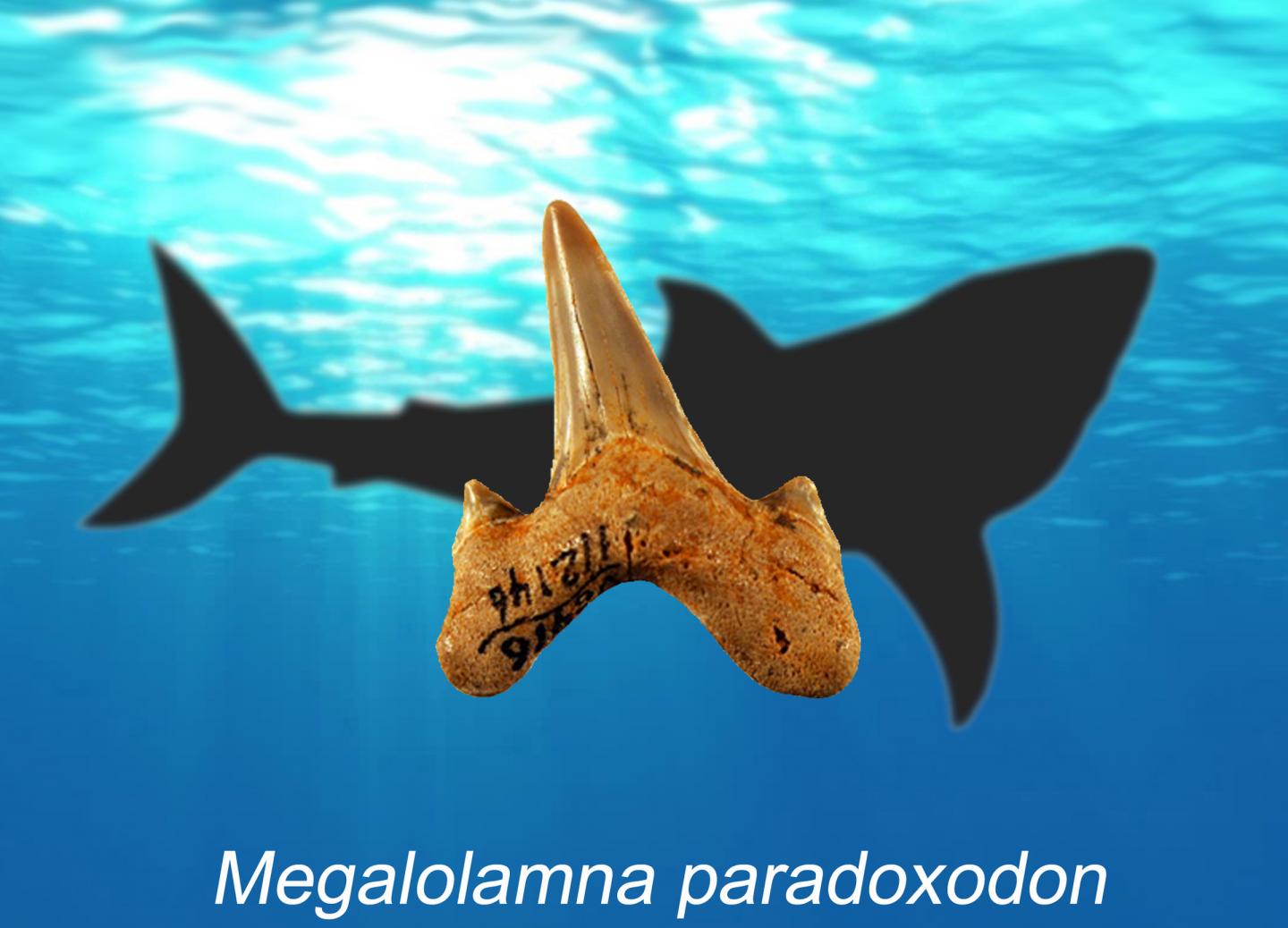 Megalolamna paradoxodon, which measured roughly 13 feet in length, is the name of new extinct shark described by an international research team that lived during the early Miocene epoch about 20 million years ago. Megalolamna paradoxodon had grasping-type front teeth and cutting-type rear teeth likely used to seize and slice medium-sized fish and it lived in the same ancient oceans megatoothed sharks inhabited. Source: Kenshu Shimada

Megalolamna paradoxodon is the name of a new extinct shark described by an international research team who based their discovery on fossilized teeth up to 4.5 centimeters (1.8 inches) tall found from the eastern and western United States (California and North Carolina), Peru and Japan.

The newly identified fossil shark lived during the early Miocene epoch about 20 million years ago and belongs to a shark group called Lamniformes, which includes the modern-day great white and mako sharks.

More specifically, it belongs to Otodontidae, which contains the iconic extinct superpredator ‘megalodon’ or the ‘megatoothed’ shark, and as an otodontid, Megalolamna paradoxodonrepresents a close cousin of the megatoothed lineage, said Kenshu Shimada, a paleobiologist at DePaul University and research associate at the Sternberg Museum in Kansas.

Certain dental features suggest its otodontid affinity, but in many other aspects, teeth of the new fossil shark look superficially like over-sized teeth of the modern-day salmon shark that belongs to the genus Lamna — hence the new genus Megalolamna, the researchers noted. The new species name ‘paradoxodon,’ or paradoxical teeth, comes from the fact that the shark appears to emerge suddenly in the geologic record with a yet unresolved nearly 45-million-year gap from when Megalolamna possibly split from its closest relative Otodus.

Although smaller than members of the megatoothed lineage containing ‘megalodon’ that reached well over 10 meters (33 feet), Megalolamna paradoxodon is still an impressive shark estimated to be minimally equivalent to the size of a typical modern-day great white, roughly 4 meters (13 feet) in length. Living in the same ancient oceans megatoothed sharks inhabited,Megalolamna paradoxodon had grasping-type front teeth and cutting-type rear teeth likely used to seize and slice medium-sized fish.

“It’s quite remarkable that such a large lamniform shark with such a global distribution had evaded recognition until now, especially because there are numerous Miocene localities where fossil shark teeth are well sampled,” said Shimada, lead author of the study.

In classifying the new fossil shark, the research team also came to a conclusion that members of the megatoothed lineage, including ‘megalodon,’ ought to be classified into the genusOtodus, and not to its traditional genus Carcharocles.

“The idea that megalodon and its close allies should be placed in Otodus is not new, but our study is the first of its kind that logically demonstrates the taxonomic proposition,” Shimada noted. Because the megatoothed shark lineage simply represents a subset of Otodus, excluding megatoothed sharks would not reflect a full lineage for Otodus — an uncomfortable taxonomic condition referred to as ‘non-monophyletic.’ The inclusion of megatoothed sharks into Otodus would make the genus a much preferred complete lineage referred to as a ‘monophyletic group’ that is considered to be a next of kin to the new genus Megalolamna.

The new study, “A new elusive otodontid shark (Lamniformes: Otodontidae) from the lower Miocene, and comments on the taxonomy of otodontid genera, including the ‘megatoothed’ clade,” will appear in the forthcoming issue of the international scientific journal Historical Biology and online on Oct. 3. In addition to Shimada, other authors include Richard Chandler, North Carolina State University; Otto Lok Tao Lam, The University of Hong Kong; Takeshi Tanaka, Japan; and David Ward, The Natural History Museum, London.