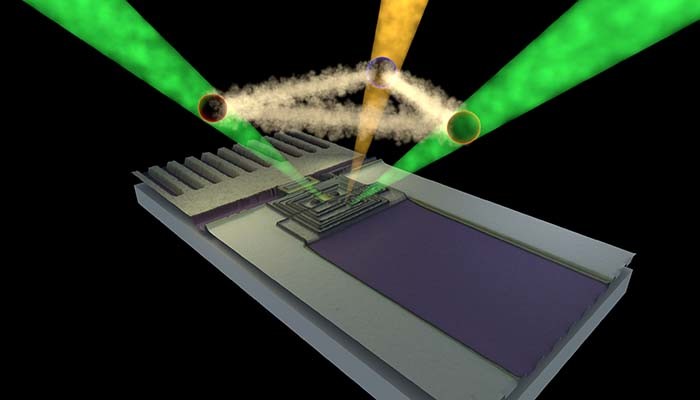 Researchers at Aalto University have demonstrated the suitability of microwave signals in the coding of information for quantum computing. Previous development of the field has been focusing on optical systems.

Researchers used a microwave resonator based on extremely sensitive measurement devices known as superconductive quantum interference devices (SQUIDs). In their studies, the resonator was cooled down and kept near absolute zero, where any thermal motion freezes. This state corresponds to perfect darkness where no photon – a real particle of electromagnetic radiation such as visible light or microwaves – is present.

However, in this state (called quantum vacuum) there exist fluctuations that bring photons in and out of existence for a very short time. The researchers have now managed to convert these fluctuations into real photons of microwave radiation with different frequencies, showing that, in a sense, darkness is more than just absence of light.

They also found out that these photons are correlated with each other, as if a magic connection exists between them.

‘With our experimental setup we managed to create complex correlations of microwave signals in a controlled way,’ says Dr Pasi Lähteenmäki, who performed the research during his doctoral studies at the Low Temperature Laboratory of Aalto University.

‘This all hints at the possibility of using the different frequencies for quantum computing. The photons at different frequencies will play a similar role to the registers in classical computers, and logical gate operations can be performed between them,’ says Doc. Sorin Paraoanu, Senior University Lecturer and one of the co-authors of the work.

The results provide a new approach for quantum computing.

‘Today the basic architecture of future quantum computers is being developed very intensively around the world. By utilizing the multi-frequency microwave signals, an alternative approach can be pursued which realizes the logical gates by sequences of quantum measurements. Moreover, if we use the photons created in our resonator, the physical quantum bits or qubits become needless,’ explains Professor Pertti Hakonen from the Low Temperature Laboratory of Aalto University.