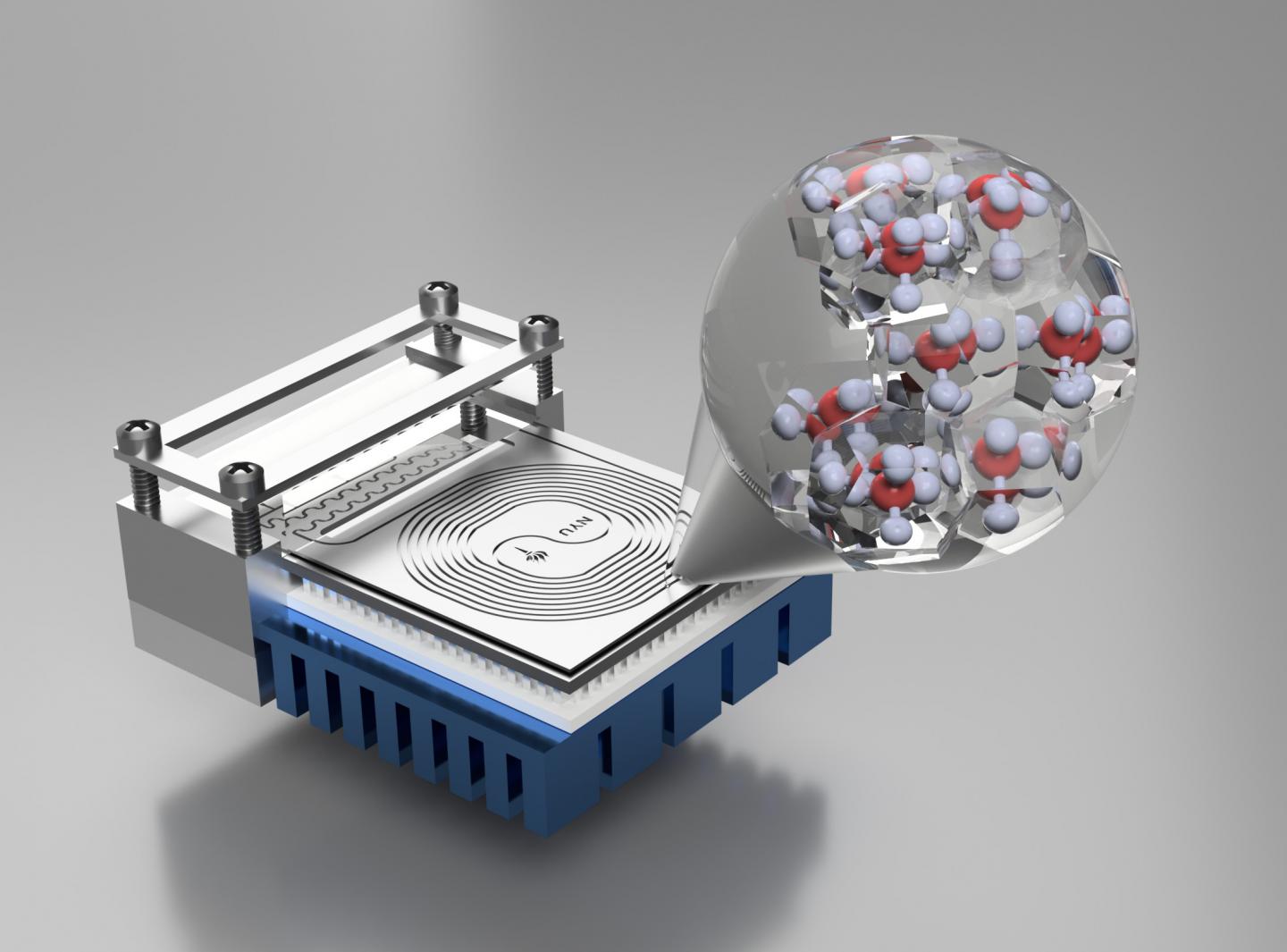 A thermoelectrically-cooled microreactor developed in the lab of NYU Tandon Professor Ryan Hartman provides insights into the crysallization of methane and water to form methane hydrate. The device comprises microchannels etched in silicon then bonded to a substrate to create 3-D microstructures. A thermoelectric cooling system enables stepwise temperature changes and isothermal operation. Stainless steel compression chucks enabled the delivery of fluids to and from the devices. Source: Ryan Hartman

Researchers at the NYU Tandon School of Engineering are using a novel means of studying how methane and water form methane hydrate that allows them to examine discrete steps in the process faster and more efficiently.

NYU Tandon researchers led by Ryan Hartman, an assistant professor of biomolecular and chemical engineering who runs Tandon’s Flow Chemistry with Microsystems Laboratory, are using microfluidics — the precise control and manipulation of fluids by constraining them to sub-millimeter geometries — along with small changes in temperature to explore the indeterminate process by which methane gas becomes a solid hydrate when exposed to water.

The work has implications for engineering and climate science. An enormous amount of methane is trapped in permafrost and beneath the ocean’s artic bed, much of it in an ice-locked methane hydrate state, in which methane is enclosed in cages of water molecules. Understanding how methane — which absorbs 30 times as much solar radiation as carbon dioxide — interacts with water to become a crystalline gas hydrate and, conversely, how it dissociates back to its gaseous state, is critical to an understanding of how it could catalyze, or perhaps slow, climate change. It could also lead to new technologies for gas separations, and efficient and safe storage of natural gas as the amount of energy in natural gas hydrate deposits is at least twice that of all other fossil fuels combined.

In research exploring how the transfer of heat and mass affect the formation of hydrates, published in Lab on a Chip, a journal of the Royal Society of Chemistry, the team established a novel method for studying the growth of methane hydrate films: a thermoelectrically cooled microchannel reactor designed by Hartman’s laboratory. Uniquely, the technology allows for “stepwise” changes in temperature, vastly reducing experimental time from hours or days, to minutes or even seconds, while enabling a much more precise examination of the process through in situ spectroscopic techniques. Thanks to this technology Hartman’s team is also the first to be able to measure the degree to which mass transfer, which includes such phenomena as diffusion, affects crystal propagation rates.

Researchers generally agree that gas hydrate formation begins with nucleation, wherein water molecules begin to form a latticework that entraps “guest” molecules of a gas like methane. Crystallization, in which the process rapidly expands outward from these seeds of crystal formation to larger structures — such as sheets at the interface of water and gas — follows. The kinetics of nucleation and other discrete steps on the way to hydrate formation are poorly understood partly because of the limitations of traditional batch reactors (essentially high-pressure tanks with agitators and heating or cooling equipment), in which water is “blanketed” with super-cooled methane gas. Such systems require that the phase boundary temperature for hydrate formation, where the boundary is the interface between methane gas and super-cooled water, be lowered by as much as 10 degrees Kelvin. Even so, nucleation can take hours or days in such systems.

In Hartman’s isothermal system, temperature cycling — wherein experimental temperatures alternate between two extremes — with cooling rates on the order of seconds, allowed the researchers to form and use the nuclei quickly enough to conduct large numbers of tests in a much shorter time than traditional methods.

“Nucleation is difficult to predict,” said Hartman. “It can take minutes or sometimes days in the formation of gas hydrates. But because we are able to cycle the temperature within seconds we can form seed crystals and use the nuclei we form to reproducibly form larger crystals.”

Hartman’s technology allowed the team to demonstrate that the propagation rate of crystals is dependent on a combination of heat transfer (through convection or fluid motion, for instance), mass transfer, and intrinsic crystallization (the rate at which hydrate crystals form when unimpeded by heat or mass transfer).

“Imagine commuting from home to work using the same route every day,” Hartman explained. “You cross three bridges, and depending on the day, one, two, or all three are congested. By how much each bridge slows you down, relatively speaking compared to the others, determines the overall time of your commute. In the context of hydrate crystallization, traffic congestion on the first bridge is heat transfer resistance, the second bridge is mass transfer resistance, and intrinsic crystallization the third. The rate at which hydrate crystals form can depend on all three. What we have done is to discover a way to measure it.”