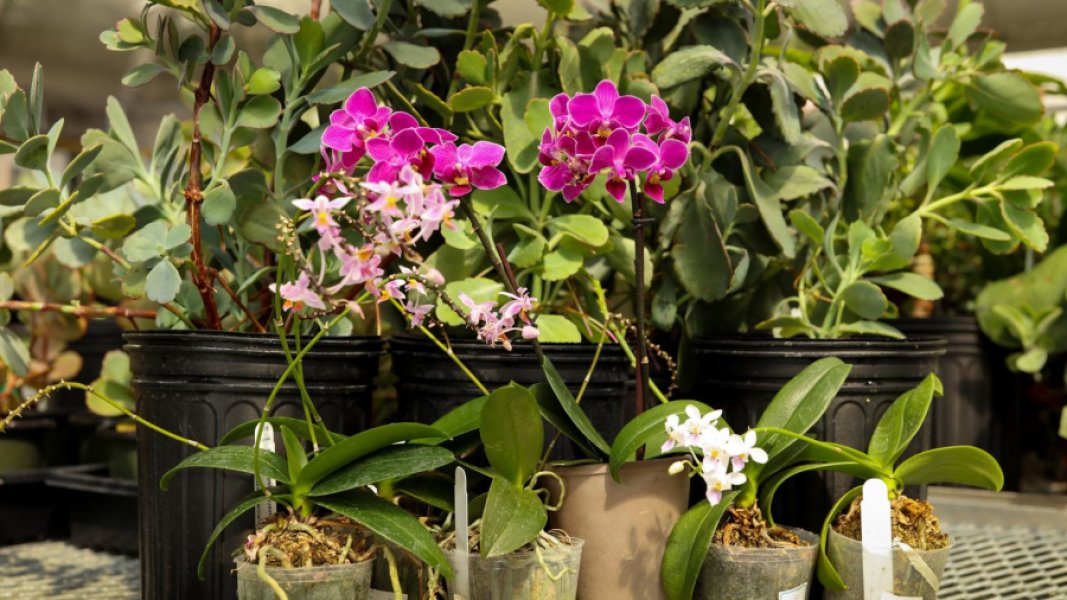 The team used ORNL’s Titan supercomputer to compare the genomes of Kalanchoë fedtschenkoi (back row) and Phalaenopsis equestris, or orchid (front row), as well as Ananas comosus, or pineapple. Credit: Jason Richards/Oak Ridge National Laboratory, US Deptartment of Energy

Taking inspiration from desert crops, researchers are one step closer to genetically enhancing crops to grow in water-limited conditions.

Researchers from the U.S. Department of Energy’s Oak Ridge National Laboratory (ORNL) have identified a common set of genes that drought-resistant plants all use to survive in semi-arid conditions, paving the way for scientists to bioengineer drought-resistant crops.

ORNL senior staff scientist Xiaohan Yang, PhD, of the Biosciences Division, said that droughts are the largest major cause of crop loss globally.

“The loss caused by drought is much higher than the rest of the factors like disease or pests,” Yang said in an interview with R&D Magazine. “In general, it is the largest impact of environmental factors resulting in the loss of crops.”

Plants in deserts and other arid climates keep their stomata or pores closed during the day to conserve water. Then at night, they open the stomata to collect carbon dioxide in a form of photosynthesis called crassulacean acid metabolism (CAM).

Discovering the building blocks of CAM photosynthesis will enable the researchers to bioengineer the metabolic processes of water-heavy crops like rice, wheat, soybeans and poplar to accelerate their adaption to environments with limited supplies of water.

The ORNL team sequenced the genome of Kalanchoë fedtschenkoi, an emerging model for CAM genomics research due to its relatively small genome and amenability to genetic modification. The researchers then used ORNL’s Titan supercomputer to investigate and compare the genomes of K. fedtschenkoi, Phalaenopsis equestris (orchid) and Ananas comosus (pineapple).

The researchers were able to identify 60 genes that exhibited convergent evolution in CAM species, including convergent daytime and nighttime gene expression changes in 54 genes and protein sequence convergence in six genes.

In particular, the team discovered a variant of phosphoenolpyruvate carboxylase (PEPC), which is the enzyme responsible for the nighttime fixation of carbon dioxide into malic acid. Malic acid is then converted back to carbon dioxide for photosynthesis during the day.

Yang said they could introduce the natural convergent changes in gene expression and protein sequences into plants that rely on traditional photosynthesis. This would accelerate their evolution to become more water-use efficient.

Crop production is the world’s largest consumer of freshwater. With the availability of clean water resources shrinking due to urbanization, human population growth and changes in climate, growing crops in less optimal environments is becoming increasingly important. According to ORNL research, rice and wheat are globally the biggest drivers of water scarcity among food commodities. Droughts also account for two-thirds of corn loss per year.

Engineering CAM photosynthesis into food and energy crops could—along with reducing the reliance on water—also boost the crops’ resiliency when the water is slightly saline or higher temperatures.

Yang said the researchers now plan to continue their research, which is the culmination of seven years of work.

“Now we are working on the next step, a deeper understanding of the gene functions and then how to use the genes for genetic improvements,” he said.