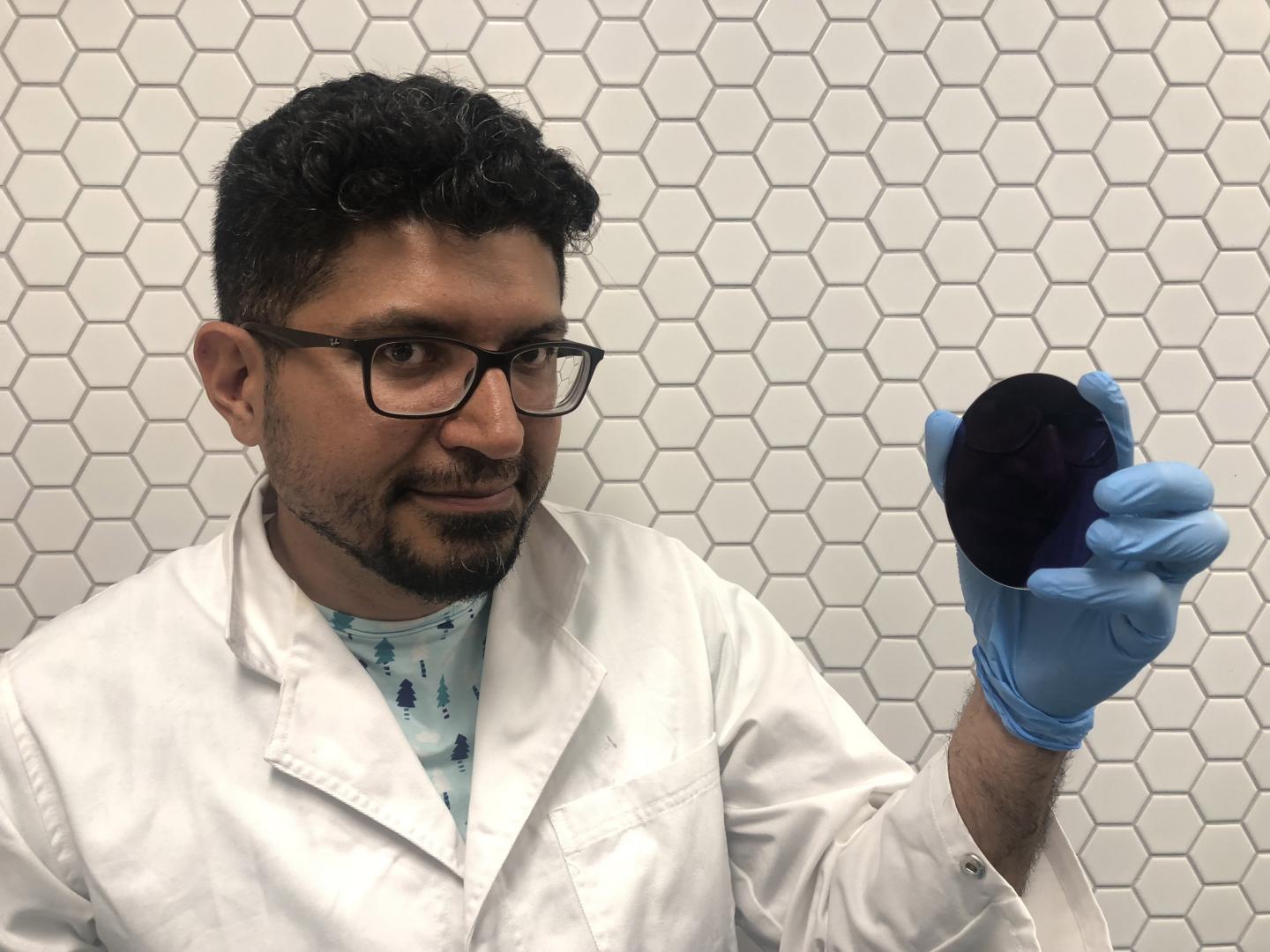 This is RMIT University Associate Professor Daniel Gomez, holding a disc covered in the nano-enhanced palladium.

Researchers from RMIT University in Australia have found a new technique to harness sunlight and drive chemical reactions, which could yield more sustainable chemical manufacturing processes.

The new method involves using nano-enhanced palladium to capture approximately 99 percent of light and convert it to power chemical reactions, reducing both the energy required and the environmental impact of chemical manufacturing.

Surprisingly, the researchers used palladium—which while excellent at producing chemical reactions, does not generally respond to light. The team found that they could manipulate the optical properties of palladium nanoparticles to make the material more sensitive to light, while still driving chemical reactions.

Scientists have long sought ways to reduce the cost of and increase the efficiency for using photo catalysis for industrial usages, and while palladium is both rare and expensive, only about four nanometers of the nano-enhanced material is needed.

“Chemical manufacturing is a power hungry industry because traditional catalytic processes require intensive heating and pressure to drive reactions,” associate professor Daniel Gomez, an ARC Future Fellow in RMIT’s School of Science, said in a statement. “But one of the big challenges in moving to a more sustainable future is that many of the materials that are best for sparking chemical reactions are not responsive enough to light. The photo catalyst we’ve developed can catch 99 percent of light across the spectrum, and 100 percent of specific colors.

“It’s scalable and efficient technology that opens new opportunities for the use of solar power—moving from electricity generation to directly converting solar energy into valuable chemicals,” he added.

The researchers believe they can further develop the technology for other applications, such as better night vision technology that produces more light-sensitive and clearer images and for desalination techniques to produces enough energy when exposed to sunlight to boil and evaporate water to separate salt.

The new technology could also significantly increase the yield in the photo-catalysis sector, as leading firms currently produce only about 30 kg of product per day using light as the driving force.

“We all rely on products of the chemical manufacturing industry – from plastics and medicines, to fertilizers and the materials that produce the colors on digital screens,” Gomez said. “But much like the rest of our economy, it’s an industry currently fueled by carbon.

“Our ultimate goal is to use this technology to harness sunlight efficiently and convert solar energy into chemicals, with the aim of transforming this vital industry into one that’s renewable and sustainable,” he added.

The study was published in ACS Applied Energy Materials.