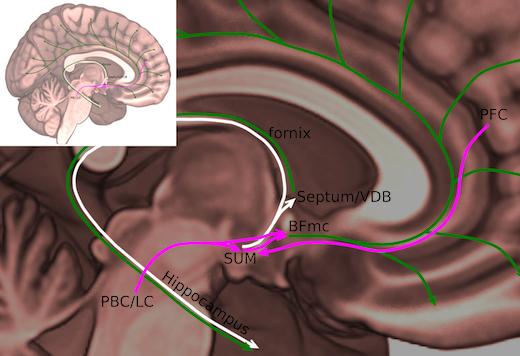 Researchers pinpointed a group of cells in the brain responsible for keeping people awake.

A team of scientists from Emory Health Sciences identified the supramammillary nucleus—which is part of the caudal hypothalamus—as the group of brain cells that promote wakefulness in human beings.

This discovery could open the door to bringing some brain injury patients out of a comatose state through electrical stimulation.

Neurologists have long suspected that a component of the ascending arousal system could be found in the caudal hypothalamus, but could never identify the precise location.

The researchers found that activating this region using targeted chemical genetic techniques on mice resulted in prolonged wakefulness during their normal sleep periods.

The supramammillary nucleus is connected to the hippocampus, which is crucial for memory formation, and parts of the frontal cortex that are involved in focused attention.

“Given these connections, this region may be important for the voluntary maintenance of wake and attention, but more work is needed to study this,” Dr. Nigel Pedersen, an assistant professor of neurology at Emory University School of Medicine and an epilepsy specialist at Emory Brain Health Center, said in a statement.

With the location and the identity of the wake-promoting neuron precisely defined, the supramammillary region joins other parts of the brain known to be involved in keeping people awake, including the nearby lateral hypothalamus, the upper brain stem and the basal forebrain.

Genetic engineering techniques were used to selectively activate specific groups of cells in the brain with a combination of the drug clozapine-N-oxide and receptors engineered to be triggered only by that drug.

Viral vectors carrying an activation switch were injected into the hypothalamus of mice followed by an administration of clozapine-N-oxide.

The researchers then mapped precisely where the injections went and which ones promoted wakefulness.

They found that only those involving the supramammillary nucleus promoted wakefulness.

“The main difference between these and normal mice is that there is no ‘quiet’ wakefulness or napping during the normally sleep-enriched daytime period,” Pedersen said.

By inhibiting the same area of the brain with similar techniques, the researchers increased the amount of time the mice slept, particularly non-REM sleep.

However, the sleep was not instant upon drug administration, as has been shown for other parts of the arousal system.

“The effects of inhibition of the supramammillary region is to increase sleep, but not dramatically,” Pedersen said. “Disruption of other components of the arousal system typically has relatively mild effects.

“This may amount to some redundancy in the arousal network, but may also relate to the way in which different components of the arousal system have a role in particular types or components of wakefulness,” he added. “We are actively exploring this idea.”

The researchers also determined using genetic manipulations that the brain chemical glutamate was critical for wake signals. When the gene for a glutamate transporter VGLUT2 was snipped out of the supramammillary nucleus, artificial stimulation had no impact on wake and sleep.

Pedersen also said that the enzyme nitric oxide synthase was used to identify a potent wake-promoting group of neurons, but their functions was dependent on glutamate