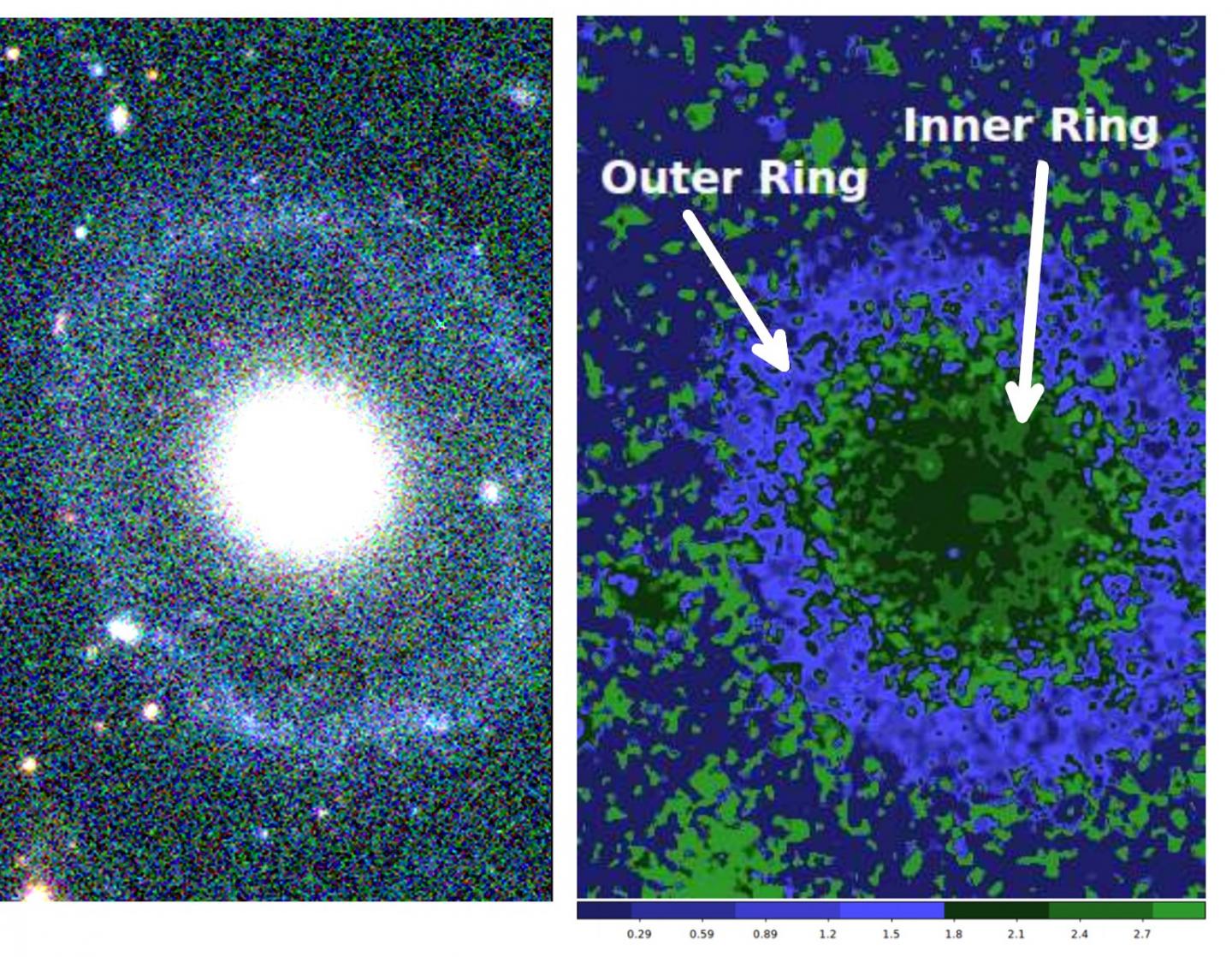 Approximately 359 million light-years away from Earth, there is a galaxy with an innocuous name (PGC 1000714) that doesn’t look quite like anything astronomers have observed before. New research provides a first description of a well-defined elliptical-like core surrounded by two circular rings — a galaxy that appears to belong to a class of rarely observed, Hoag-type galaxies. This work was done by scientists at the University of Minnesota Duluth and the North Carolina Museum of Natural Sciences. (You can see video about this research at https://youtu.be/F5ds04xtRdY.)

The researchers collected multi-waveband images of the galaxy, which is only easily observable in the Southern Hemisphere, using a large diameter telescope in the Chilean mountains. These images were used to determine the ages of the two main features of the galaxy, the outer ring and the central body.

While the researchers found a blue and young (0.13 billion years) outer ring, surrounding a red and older (5.5 billion years) central core, they were surprised to uncover evidence for second inner ring around the central body. To document this second ring, researchers took their images and subtracted out a model of the core. This allowed them to observe and measure the obscured, second inner ring structure.

“We’ve observed galaxies with a blue ring around a central red body before, the most well-known of these is Hoag’s object. However, the unique feature of this galaxy is what appears to be an older diffuse red inner ring,” says Patrick Treuthardt, co-author of the study and an astrophysicist at the North Carolina Museum of Natural Sciences.

Galaxy rings are regions where stars have formed from colliding gas. “The different colors of the inner and outer ring suggest that this galaxy has experienced two different formation periods,” Mutlu-Pakdil says. “From these initial single snapshots in time, it’s impossible to know how the rings of this particular galaxy were formed.” The researchers say that by accumulating snapshot views of other galaxies like this one astronomers can begin to understand how unusual galaxies are formed and evolve.

While galaxy shapes can be the product of internal or external environmental interactions, the authors speculate that the outer ring may be the result of this galaxy incorporating portions of a once nearby gas-rich dwarf galaxy. They also say that inferring the history of the older inner ring would require the collection of higher-resolution infrared data.

“Whenever we find a unique or strange object to study, it challenges our current theories and assumptions about how the Universe works. It usually tells us that we still have a lot to learn,” says Treuthardt.