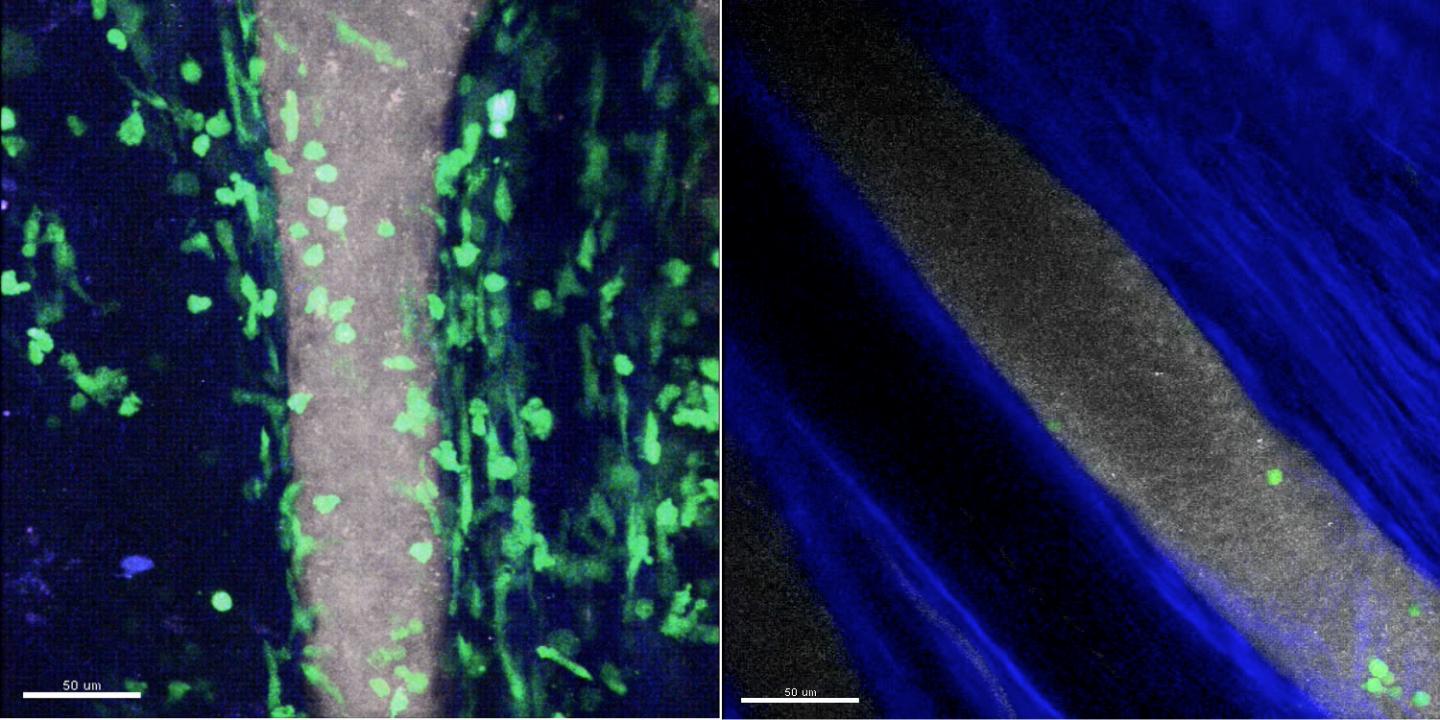 In the image on the left, many green-labeled neutrophils carrying the C5a receptor have moved out from the grey blood vessel into the joint of a mouse in which inflammatory arthritis has been induced. In an animal lacking expression of the C5a receptor on neutrophils (right), only a few adhere to the blood vessel wall and, after quickly detaching, do not enter the joint.CREDIT Yoshishige Miyabe, MD, PhD, Massachusetts General Hospital Center for Immunology and Inflammatory Diseases

Using a novel approach for imaging the movement of immune cells in living animals, researchers from the Massachusetts General Hospital (MGH) Center for Immunology and Inflammatory Diseases (CIID) have identified what appear to be the initial steps leading to joint inflammation in a model of inflammatory arthritis. In their report published in Science Immunology they describe how expression of a specific molecule – complement C5a – is required to cause the immune cells called neutrophils to adhere to joint surfaces and migrate into the joint, a process known to set off the inflammatory cascade.

“Inflammatory arthritis is caused when immune cells are recruited from the blood into the joint in a highly regulated process controlled by chemoattractants and adhesion receptors,” says Andrew Luster, MD, PhD, chief of the MGH Division of Rheumatology, Allergy and Immunology , director of the CIID and senior author of the report. “But when the disease has become symptomatic, it is difficult to determine the initial steps that set off the recruitment of immune cells into the joint and the specific roles of the different chemoattractants. Our study was designed to more fully understand this process.”

Inflammatory arthritis includes a number of autoimmune diseases of the joints – including rheumatoid arthritis and lupus – and in many cases is caused by a type of inflammation called type III hypersensitivity. That reaction results when a localized accumulation of immune complexes – antibodies bound to their antigens – is deposited in tissue and sets off an inflammatory response involving the infiltration and activation of immune cells, initially the neutrophil. Current thinking regarding type III hypersensitivity is that immune cells within tissues sense the presence of these immune complexes (ICs) through specific receptor molecules and release inflammatory factors called cytokines that activate the endothelial cells lining adjacent blood vessels to promote the recruitment of neutrophils.

To better determine the role of specific chemoattractants in type III hypersensitivity, lead author Yoshishige Miyabe, MD, PhD, a research fellow in Luster’s lab, used multiphoton intravital microscopy – an imaging technology pioneered for studies of immune cell movements in living animals by CIID investigator and co-author Thorsten Mempel, MD, PhD – to follow in real time the development of IC-induced arthritis in a mouse model of rheumatoid arthritis. Their experiments revealed that the presence of ICs within the joint space induces the generation of complement C5a, a component of the innate immune system, which is then displayed on the inner walls of adjacent blood vessels. C5a directly initiates the adherence of neutrophils to the vessel walls through interaction with the C5a receptor on neutrophils, which then pass into the joint space and set off inflammation.

“The control of immune cell entry into the joint represents a major point at which new therapies could be developed to reduce the symptoms of inflammatory arthritis,” says Luster, who is the Harrison Professor of Medicine at Harvard Medical School. “Imaging of the joint could help evaluate the mechanism of a drug’s therapeutic effect, and if a process turns out to be mediated by more than one chemoattractant, understanding the mechanism would allow the rational design of combination therapies to completely shut down critical steps in the process.”

Luster’s team hopes to further investigate the characteristics of joints that underlie the critical role of C5a in initiating type III hypersensitivity and whether specific molecules expressed on endothelial cells lining joints play a role in transporting C5a and chemokines from the joint space into adjacent blood vessels. The investigators also plan to image the entry into the joint space of other immune cells involved in rheumatoid arthritis – such as T cells, B cells, macrophages and dendritic cells – and study their interactions with each other as well as with structural cells of the joint.