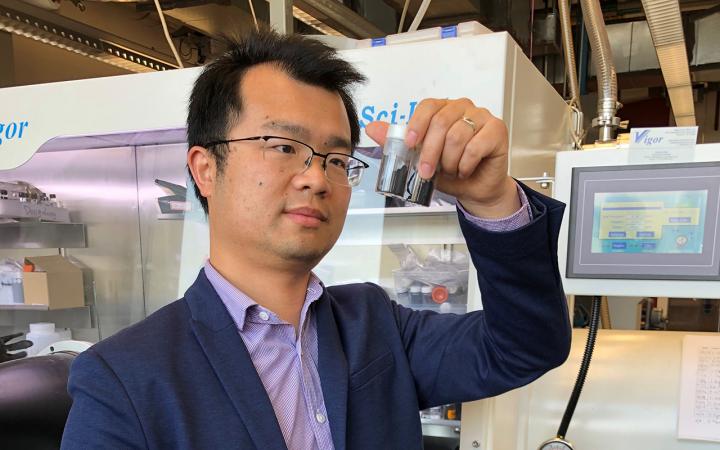 Researchers at the University of California San Diego have improved their recycling process that regenerates degraded cathodes from spent lithium-ion batteries. The new process is safer and uses less energy than their previous method in restoring cathodes to their original capacity and cycle performance.

Zheng Chen, a professor of nanoengineering who is affiliated with the Sustainable Power and Energy Center at UC San Diego, led the project. The work was published in Advanced Energy Materials.

“Due to the rapid growth of electric vehicle markets, the worldwide manufacturing capacity of lithium-ion batteries is expected to reach hundreds of gigawatt hours per year in the next five years,” Chen said. “This work presents a solution to reclaim the values of end-of-life lithium-ion batteries after 5 to 10 years of operation.”

Chen’s team previously developed a direct recycling approach to recycle and regenerate degraded cathodes. It replenishes lithium ions that cathodes lose over extended use and restores their atomic structures back to their original states. However, that process involves pressurizing a hot lithium salt solution of cathode particles to around 10 atmospheres. The problem is this pressurizing step raises costs and requires extra safety precautions and special equipment, said Chen.

So the team developed a milder process to do the same job at ambient pressure (1 atmosphere). The key was using eutectic lithium salts–a mixture of two or more salts that melts at temperatures much lower than either of its components. This combination of solid lithium salts produces a solvent-free liquid that researchers can use to dissolve degraded cathode materials and restore lithium ions without adding any extra pressure in the reactors.

The new recycling method involves collecting cathode particles from spent lithium ion batteries and then mixing them with a eutectic lithium salt solution. The mixture is then heat treated in two steps: it is first heated to 300 C, then it goes through a short annealing process in which it is heated to 850 C for several hours and then cooled naturally.

Researchers used the method to regenerate NMC (LiNi0.5Mn0.3Co0.2), a popular cathode containing nickel, manganese and cobalt, which is used in many of today’s electric vehicles.

“We made new cathodes from the regenerated particles and then tested them in batteries built in the lab. The regenerated cathodes showed the same capacity and cycle performance as the originals,” said Yang Shi, the first author who performed this work as a postdoctoral researcher in Chen’s lab at UC San Diego.

“In an end-of-life lithium-ion battery, the cathode material loses some of its lithium. The cathode’s crystal structure also changes such that it’s less capable of moving ions in and out. The recycling process that we developed restores both the cathode’s lithium concentration and crystal structure back to their original states,” Shi said.

The team is tuning this process so that it can be used to recycle any type of cathode materials used in lithium-ion and sodium-ion batteries.

“The goal is to make this a universal recycling process for all cathode materials,” Chen said. The team is also working on a process to recycle degraded anodes, such as graphite as well as other materials.

Chen is also collaborating with UC San Diego nanoengineering professor Shirley Meng, who is the director of the Sustainable Power and Energy Center, to identify subtle changes in the cathode microstructure and local composition using high-resolution microscopic imaging tools.