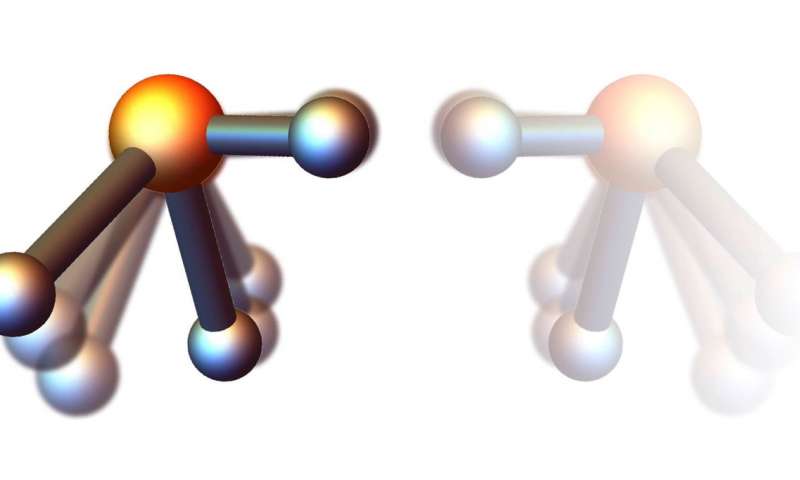 When rotated rapidly, symmetric molecules like phosphine (PH) lose their symmetry: The bond between phosphorus and hydrogen along the axis of rotation is shorter than the other two such bonds. Depending on the direction of rotation, two mirror-inverted versions of the molecule are formed. Credit: DESY, Andrey Yachmenev

Scientists have developed a new method to examine the mirror images of several molecules that exist in nature.

A team of researchers from the Deutsches Elektronen-Synchrotron, Universität Hamburg and University College London has developed a technique to develop custom-made mirror molecules that will enable them to gain new insight into the inner workings of nature and pave the way for new materials and methods.

“For unknown reasons, life as we know it on Earth almost exclusively prefers left-handed proteins, while the genome is organized as the famous right-handed double helix,” Andrey Yachmenev, who lead this theoretical at the Center for Free-Electron Laser Science (CFEL), said in a statement. “For more than a century, researchers have been unravelling the secrets of this handedness in nature, which does not only affect the living world—mirror versions of certain molecules alter chemical reactions and change the behavior of materials.”

The handedness—also known as chirality—occurs naturally only in some types of molecules. For example, the right-handed version of caravone–C10H14O—gives caraway a distinct taste, while the left-handed version influences the taste of spearmint.

“However, it can be artificially induced in so-called symmetric-top molecules,” co-author Alec Owens from the Center for Ultrafast Imaging (CUI), said in a statement. “If these molecules are stirred fast enough, they lose their symmetry and form two mirror forms, depending on their sense of rotation.

“So far, very little is known about this phenomenon of rotationally-induced chirality, because hardly any schemes for its generation exist that can be followed experimentally,” he added.

The researchers computationally achieved rotationally induced chirality with realistic parameters in the lab using corkscrew-shaped laser pulses known as optical centrifuges. For example, phosphine’s (PH3) quantum-mechanical calculations show that at rotation rates of trillions of times per second, the phosphorous-hydrogen bond that the molecule rotates about becomes shorter than the other two of these bonds and depending on the sense of rotation, two chiral forms of phosphine emerge.

“Using a strong static electric field, the left-handed or right-handed version of the spinning phosphine can be selected,” Yachmenev said. “To still achieve the ultra-fast unidirectional rotation, the corkscrew-laser needs to be fine-tuned, but to realistic parameters.”

The new scheme could in principal work with other, heavier molecules, which would require weaker laser pulses and electric fields, but are too complex to be solved in the first stages of the current investigation. These heavier molecules are preferred for experiments over the highly toxic phosphine.
The researchers propose a technique to deliver tailor-made mirror molecules. Further examinations into their interactions with the environment could help explain the handedness in nature.

“Facilitating a deeper understanding of the phenomenon of handedness this way could also contribute to the development of chirality-based tailor-made molecules and materials, novel states of matter, and the potential utilization of rotationally-induced chirality in novel metamaterials or optical devices,” Jochen Küpper, a professor of physics and of chemistry at Universität Hamburg, said in a statement.