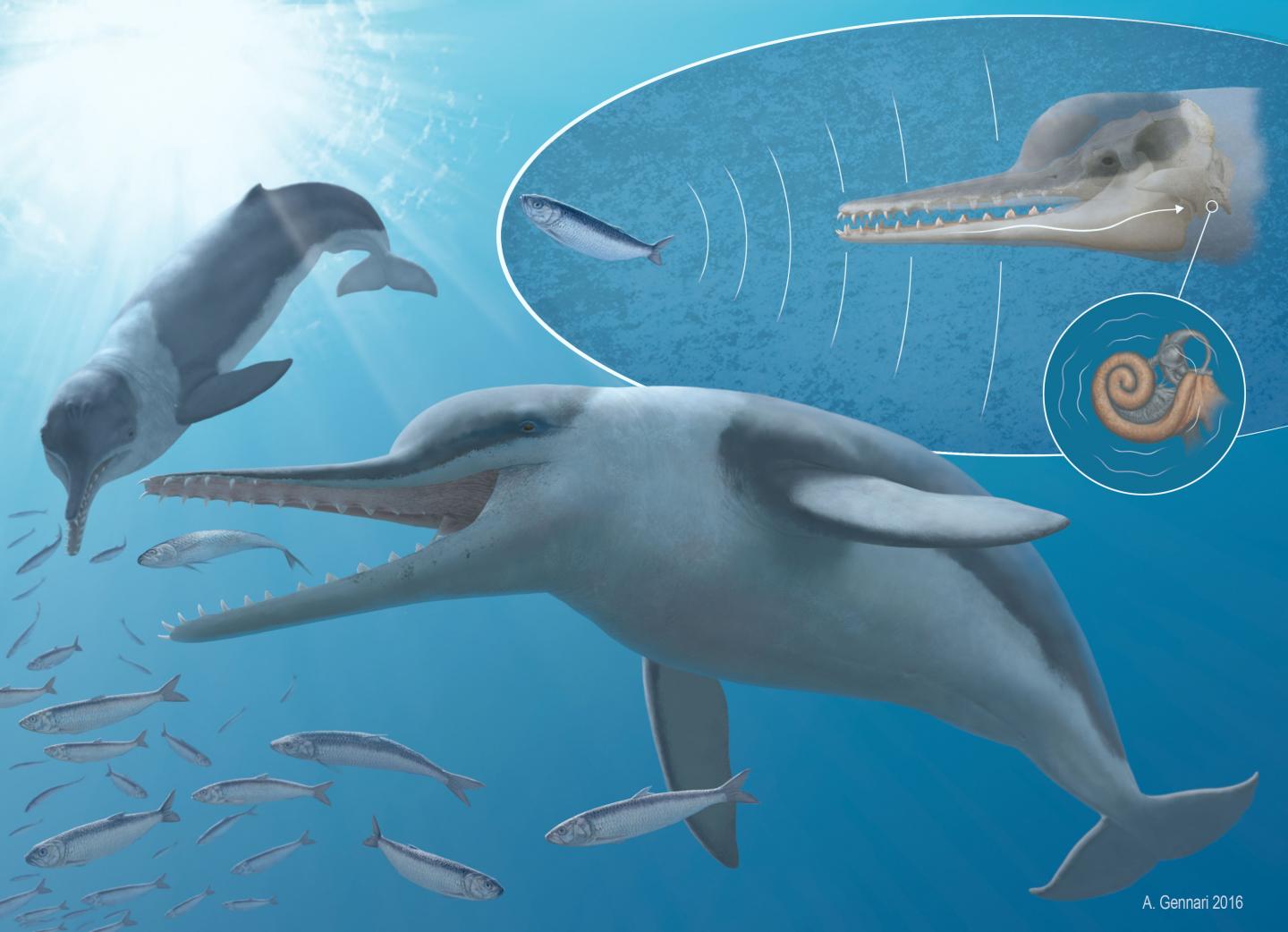 A newly-named fossil whale species had superior high-frequency hearing ability, helped in part by the unique shape of inner ear features that have given scientists new clues about the evolution of this specialized sense.

In a study published August 4 in Current Biology, researchers from New York Institute of Technology and colleagues from the National Museum of Natural History in France describe a new species of whale,Echovenator sandersi (“Echo Hunter”), an ancient relative of the modern dolphin, and its ability to hear frequencies well above the range of hearing in humans.

The research pushes the origin of high frequency hearing in whales farther back in time — about 10-million years than previous studies have indicated.

“Previous studies have looked at hearing in whales but our study incorporates data from an animal with a very complete skull,” says Morgan Churchill, a postdoctoral fellow at NYIT College of Osteopathic Medicine and the paper’s lead author. “The data we gathered enabled us to conclude that it could hear at very high frequencies, and we can also say with a great degree of certainty where it fits in the tree of life for whales.”

“This was a small, toothed whale that probably used its remarkable sense of hearing to find and pursue fish with echoes only,” says Associate Professor Jonathan Geisler, a study co-author. “This would allow it to hunt at night, but more importantly, it could hunt at great depths in darkness, or in very sediment-choked environments.”

High frequency hearing plays a key role in echolocation, the use of sound waves and their echoes to establish the position of objects. Bats, some whales and all dolphins use echolocation to hunt.

High-frequency sound production and hearing are key, he says, because the combination yields a rich “audio picture” of the surrounding environment. Churchill says the study confirms that most of the specializations associated with high frequency hearing evolved about 27 million years ago — about the same time as echolocation, although a few features evolved even earlier.

The study is part of a series funded by a $220,000 National Science Foundation grant to Geisler and Associate Professor Brian Beatty, Ph.D., to conduct the first wide-ranging study of cetacean skull development in nearly a century.

To learn more about Echovenator, Churchill and colleagues studied a 27-million-year-old skull discovered in South Carolina 2001. By analyzing the bony support structures of the inner ear membranes, along with other measurements of the inner ear, the researchers concluded that the whale had ultrasonic hearing capabilities, and could hear frequencies above the range of human hearing.

About 60 million years ago, the semiaquatic ancestor of whales had a limited ability to hear high frequencies. However, Geisler says statistical analyses of fossils in the study allowed researchers to conclude that some degree of high frequency hearing evolved before echolocation and then became even more specialized in modern toothed whales. Baleen whales, which do not echolocate and are specialized to hear low frequency sound, lost some of these initial specializations for hearing high frequency sound.

As more biological research uses computer models, Geisler says the current study may help scientists distinguish what inner ear features are needed to hear sounds of a given frequency.