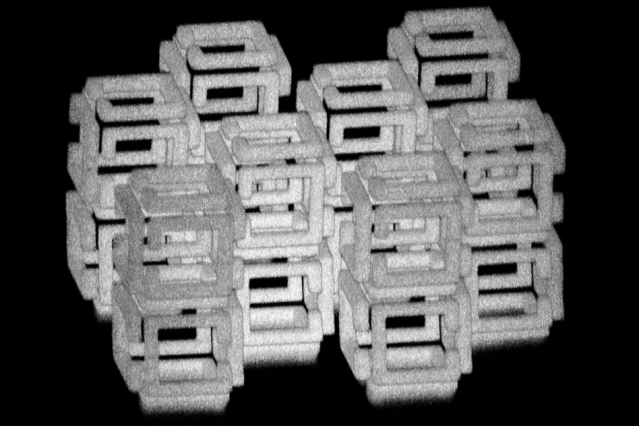 A research team from the Massachusetts Institute of Technology (MIT) has developed a new technique to fabricate nanoscale 3D objects of almost any shape and then pattern those objects with a number of different materials like metals, quantum dots and DNA.

The new technique enables scientists to create virtually any shape and structure by using a laser to pattern a polymer scaffold. They then can attach other materials to the scaffold and shrink it to generate structures substantially smaller in volume than the original.

“It’s a way of putting nearly any kind of material into a 3D pattern with nanoscale precision,” Edward Boyden, an associate professor of biological engineering and of brain and cognitive sciences at MIT, said in a statement.

The shrunk structures—which are one thousandth the volume of the original structure—could be used in a number of fields, including optics, medicine and robotics. The new technique is also beneficial because it relies on equipment that most biology and materials science laboratories are already using.

Currently, researchers must etch patterns onto a surface with light to produce 2D nanostructures.  However, this method does not work for 3D structures.

It is possible to make 3D nanostructures by gradually adding layers on top of each other in a cumbersome and slow process.

It is also possible to directly print 3D nanoscale objects, but this process is restricted to specialized materials such as polymers and plastics. These materials generally lack the functional properties needed in many applications and can only generate self-supporting structures.

However, the researchers adapted a technique for high-resolution brain tissue imaging called expansion microscopy to overcome the previous limitations. Expansion microscopy involves embedding tissue into a hydrogel and then expanding it to enable high resolution imaging with a standard microscope.

The team ultimately decided to reverse this process to create large-scale objects embedded in expanded hydrogels. They then shrank them to the nanoscale using an approach called implosion fabrication.

The researchers used a material as the scaffold made of polyacrylate—which is very absorbent—-that is bathed in a solution comprised of molecules of fluorescein that attach to the scaffold when activated by a laser light.

They also used two-photon microscopy to precisely target the points deep within a structure and attach fluorescein molecules that act as anchors that can bind to other types of molecules to specific locations within the gel.

After placing the designated molecules in the right locations, the team will shrink the entire structure by adding an acid that blocks the negative charges in the polyacrylate gel so that they no longer repel each other. This causes the gel to contract.

Using this technique, the research shrunk the objects 10-fold in each dimension, allowing for increased resolution. The method also makes it possible to assemble materials in a low-density scaffolds and enables easy access for modification.

“People have been trying to invent better equipment to make smaller nanomaterials for years, but we realized that if you just use existing systems and embed your materials in this gel, you can shrink them down to the nanoscale, without distorting the patterns,” Samuel Rodriques, a graduate student at MIT, said in a statement.

The research team now hope to find more applications for this new technology, partially in the world of optics with specialized lenses that could be used to study the fundamental properties of light.
The study was published in Science.