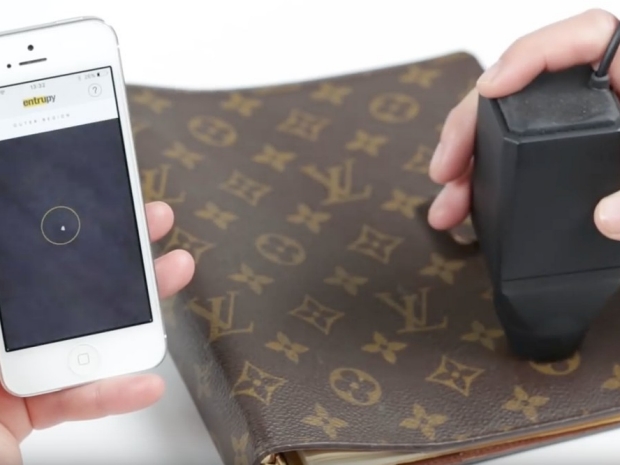 A team of researchers has developed a new mechanism that uses machine-learning algorithms to distinguish between genuine and counterfeit versions of the same product. Image courtesy of Entrupy, Inc.

A team of researchers has developed a new mechanism that uses machine-learning algorithms to distinguish between genuine and counterfeit versions of the same product.

The work, led by New York University Professor Lakshminarayanan Subramanian, will be presented on Mon., Aug. 14 at the annual KDD Conference on Knowledge Discovery and Data Mining in Halifax, Nova Scotia.

“The underlying principle of our system stems from the idea that microscopic characteristics in a genuine product or a class of products—corresponding to the same larger product line—exhibit inherent similarities that can be used to distinguish these products from their corresponding counterfeit versions,” explains Subramanian, a professor at NYU’s Courant Institute of Mathematical Sciences.

The system described in the presentation is commercialized by Entrupy Inc., an NYU startup founded by Ashlesh Sharma, a doctoral graduate from the Courant Institute, Vidyuth Srinivasan, and Subramanian.

While other counterfeit-detection methods exist, these are invasive and run the risk of damaging the products under examination.

It does so by deploying a dataset of three million images across various objects and materials such as fabrics, leather, pills, electronics, toys and shoes.

“The classification accuracy is more than 98 percent, and we show how our system works with a cellphone to verify the authenticity of everyday objects,” notes Subramanian.

A demo of the technology may be viewed here (courtesy of Entrupy Inc.).

To date, Entrupy, which recently received $2.6 million in funding from a team of investors, has authenticated $14 million worth of goods.