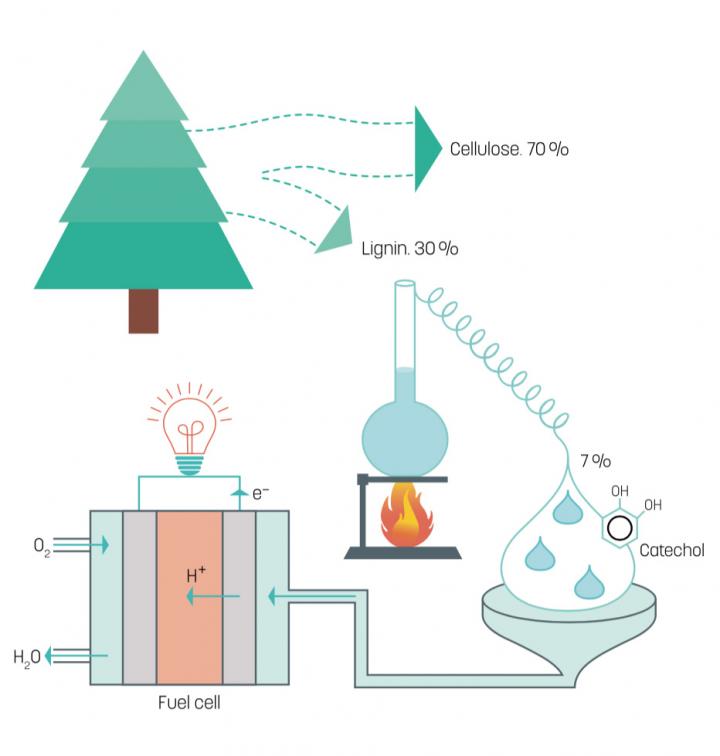 Scientists have tapped into an abundant and cheap biopolymer from trees to make the next generation of fuel cells.

A team of researchers from the Laboratory of Organic Electronics at Linköping University (LiU) has developed a fuel cell using lignin—a cheap and readily available by-product of paper production. Lignin a class of complex organic polymers that is the key to gluing the cellulose fibers together to form strong and durable wood.

“An efficient method to produce catechol from lignin is already available, and we are first in the world to demonstrate a fuel cell that uses fuel from this forestry raw material,”  said the team’s lead researcher Xavier Crispin, PhD  in a statement.

During the chemical manufacturing of paper pulp, lignin—which makes up about 25 percent of a tree—is dissolved in either the sulphate or sulphite process because the cellulose is the desired component for making paper.

Lignin is a common biopolymer made up of a large number of hydrocarbon chains woven together. The chains can be broken down in an industrial process to benzenediols—the energy-rich constituent parts. The researchers discovered that one of the benzenediols—catechol—makes up 7 percent of lignin and is an excellent fuel to use in fuel cells without producing carbon dioxide.

“When a fuel such as ethanol is used in a fuel cell, people usually claim that it has zero impact on the climate, since the carbon dioxide is a component of a circulation,” Crispin said. “This means that ethanol is considered to be a green fuel.

“We can now manufacture electricity without any emission of carbon dioxide at all, which makes our fuel super green,” he added. “The technology is also both cheap and scalable.”

Benzenediols are aromatic molecules and metal electrodes cannot be used in fuel cells based on benzenediols because the reactions are slightly more complex. The researchers used electrodes made from PEDOT:PSS—a popular polymer that can conduct electricity while simultaneously having a surplus of protons, allowing it to function as both electrode and proton conductor.

“There is a fundamental lack of knowledge about PEDOT:PSS within electrochemistry,” Crispin said.

Hydrogen gas, which reacts with oxygen from the air, is the fuel that is most often used in tradition fuel cells. The chemical energy is converted in the fuel cell to electricity, water and heat, but 96 percent of the hydrogen produced worldwide is from non-sustainable sources.

While ethanol and methanol are also used in fuel cells, they produce, as well as hydrogen gas, carbon dioxide as a by-product. Also, the electrodes needed to attract fleeing electrons are generally made from platinum, which is both expensive and rare.

The study was published in Advanced Sustainable Systems.