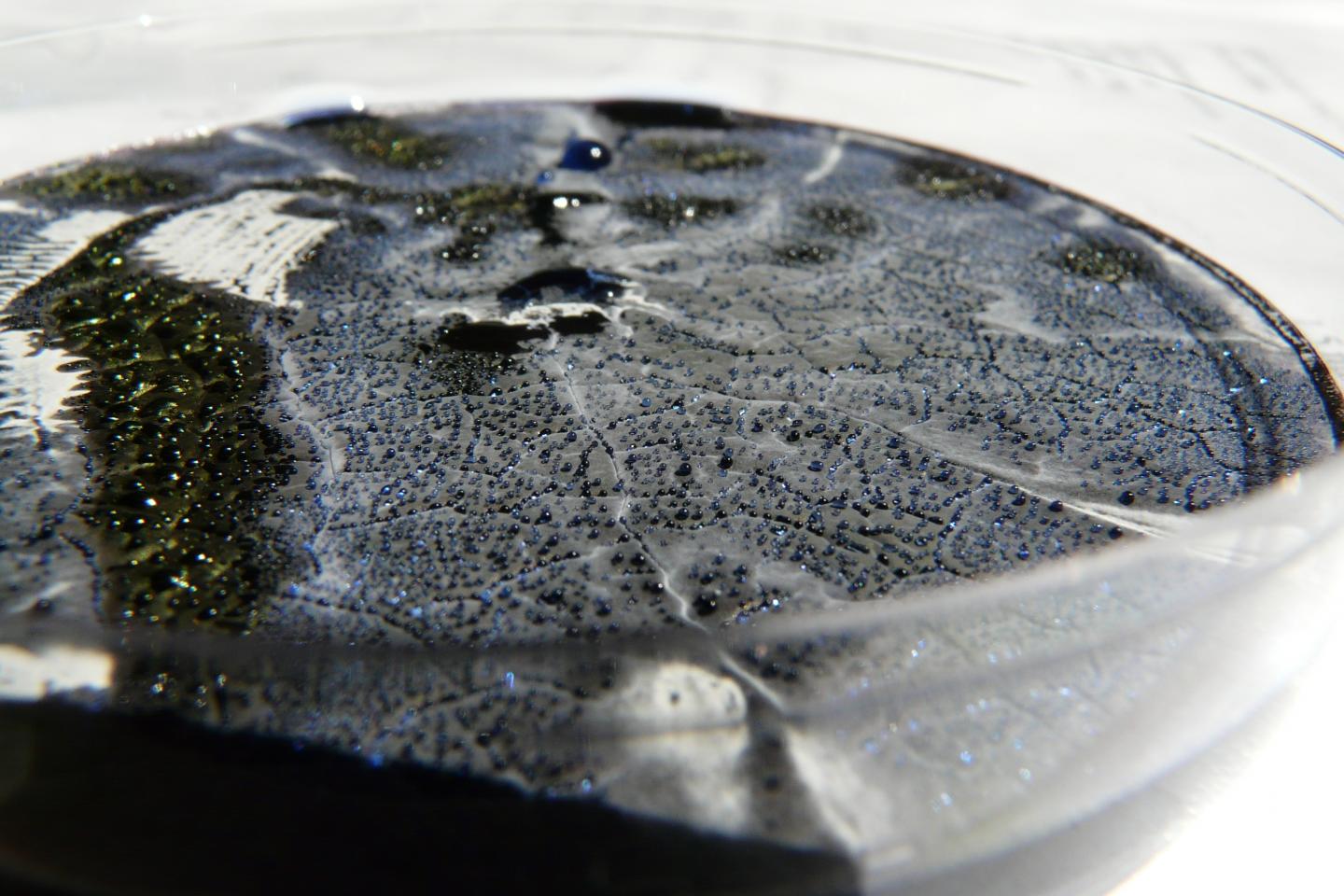 These are antibiotic droplets produced by Streptomyces coelicolor grown on a Petri dish. Credit: University of Warwick

Scleric Acid has been discovered by capturing and engineering a DNA fragment from soil bacteria Streptomyces sclerotialus, and could help fight bacterial infections – by researchers at the School of Life Sciences and Department of Chemistry, University of Warwick.

A team led by Dr Christophe Corre and Dr Manuela Tosin have had published in Chemical Science the characterisation of a new bioactive natural product whose derivatives could be used as antibiotics and help fight infections.

The new molecule was encrypted in a silent cluster of genes in the soil bacterium Streptomyces sclerotialus (isolated in Pune – India) and discovered by turning on an otherwise silent pathway using a combination of bioinformatics analyses, CRISPR/Cas9 gene editing and analytic chemistry instrumentation.

Bioinformatics tools permit to identify proteins encoded in DNA sequences and to predict the role they may play. In the majority of studies aimed to discover new natural products, researchers look for conserved enzymes with homology to known biosynthetic machineries. In this study, conserved regulatory elements associated with biosynthetic genes were targeted. An approach expected to lead to the discovery of natural products assembled by truly novel types of biocatalysts.

The study revealed a structurally new class of natural product but also new biosynthetic enzymes that catalyse unique condensation reactions between the building blocks that make up scleric acid. Such enzymes may find future applications as biocatalysts for the manufacture of high value chemicals.

The expression and manipulation of the cluster of genes of interest was carried out in a secondary organism using quick and efficient CRISPR/Cas9-based gene editing technology. This means that there is no need to optimise a protocol for the engineering of the bacterial species of interest, and this approach can be extended to exploit gene clusters identified in genetically intractable bacteria or even in metagenomes (genetic material recovered directly from environmental samples).

The approach of engineering genetically silent pathways that bacteria are thought to “normally” use to outcompete other micro-organisms could result in the discovery of a wide variety of novel antimicrobial compounds – which could help solve the antibiotic resistance crisis.

The researchers then tested the scleric acid possible antibiotic powers and found that it showed moderate antibacterial activity against Mycobacterium tuberculosis (H37Rv), exhibiting a 32% inhibition on the growth of this strain. The scleric acid also showed inhibitory activity on the cancer associated metabolic enzyme nicotinamide N-methyltransferase (NNMT).

“Over the last decade, a combination of technological advances, in particular in DNA sequencing, bioinformatics tool development, microbial genetic engineering and analytical chemistry, has really changed the game. New strategies have been developed to exploit the genomes of bacteria and access a large untapped source of novel molecules with therapeutic potential, in particular to treat infectious diseases.

Using synthetic biology, our study has evidenced that breaking locks at the transcriptional level does trigger the production of truly novel bioactive substances. The next game-changer will be the successful implementation of automation and robotics to characterise the thousands of natural products that remain encrypted at the DNA level.”