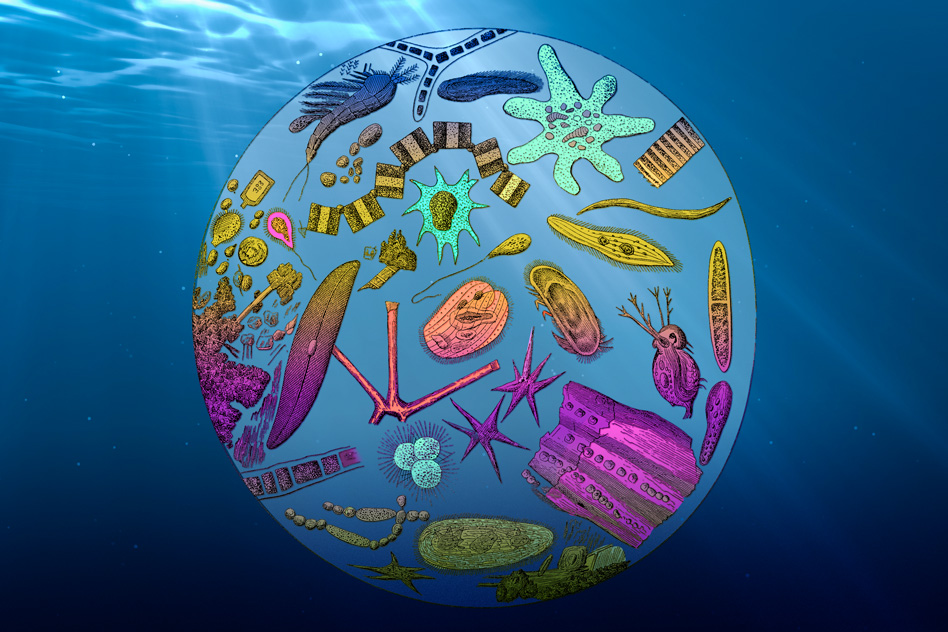 MIT climate scientists have found that the ocean’s export efficiency, or the fraction of total plankton growth that is sinking to its depths, is decreasing, due mainly to rising global temperatures. Image: MIT News

If there is anywhere for carbon dioxide to disappear in large quantities from the atmosphere, it is into the Earth’s oceans. There, huge populations of plankton can soak up carbon dioxide from surface waters and gobble it up as a part of photosynthesis, generating energy for their livelihood. When plankton die, they sink thousands of feet, taking with them the carbon that was once in the atmosphere, and stashing it in the deep ocean.

The oceans, therefore, have served as a natural sponge in removing greenhouse gases from the atmosphere, helping to offset the effects of climate change.

But now MIT climate scientists have found that the ocean’s export efficiency, or the fraction of total plankton growth that is sinking to its depths, is decreasing, due mainly to rising global temperatures.

In a new study published in the journal Limnology and Oceanography Letters, the scientists calculate that, over the past 30 years, as temperatures have risen worldwide, the amount of carbon that has been removed and stored in the deep ocean has decreased by 1.5 percent.

“We figured the amount of carbon that is not sinking out as a result of global temperature change is similar to the total amount of carbon emissions that the United Kingdom pumps into the atmosphere each year,” says first author B.B. Cael, a graduate student in MIT’s Department of Earth, Atmospheric and Planetary Sciences (EAPS). “If carbon is just standing in the surface ocean, it’s easier for it to end up back in the atmosphere.”

Cael’s co-authors on the paper are Kelsey Bisson of the University of California at Santa Barbara and Mick Follows, an associate professor in EAPS.

In 2016, the team first started looking into whether sea surface temperature has an effect on the ocean’s export efficiency. The group’s main research focus is on marine microbes, including interactions between communities, and their effects on and responses to climate change.

In studying export efficiency, the researchers identified two processes in surface ocean microbes that affect the rate at which carbon is drawn down to the deep ocean: Photosynthesizing organisms such as plankton absorb carbon dioxide from surface waters, fixing carbon into their systems; respiring organisms such as bacteria and krill take in oxygen and emit carbon dioxide into the surrounding waters.

Based on the chemistry of photosynthesis and respiration, the researchers realized that the two processes respond differently depending on temperature. Photosynthesizers grow and die relatively faster in colder environments, while respirers are relatively more active in warmer temperatures.

In 2016, the researchers developed a simple model to predict the ocean’s rate of drawing down carbon at given sea surface temperatures. Their results matched with recorded observations of the amount of carbon exported to the deep ocean.

For this new paper, the researchers used the model to estimate the ocean’s export efficiency over the last three decades. Since 1982, satellites, ships, and buoys have made measurements of sea surface temperatures around the world, which scientists have averaged for each measured location and aggregated into publicly available databases.

For this study, the team used temperature measurements from three different databases, taken every month from 1982 to 2014, for locations around the world. The group used the temperature to estimate export efficiency across the global ocean for each month, based on their simple model. They traced the change in export efficiencies across the globe, over the 33-year period during which measurements were available.

They found that, worldwide, the rate at which the ocean draws down carbon has declined by 1 to 2 percent since 1982. Sea surface temperatures have increased during this period.

“People probably expected a decline in export efficiency, but the thing I find interesting is, we have a nice way to try and quantify it,” Cael says. “We’re able to estimate that over last 30 years, export efficiency has declined by 1 or 2 percent, so 1 to 2 percent less of total plankton productivity is making it out of the surface ocean, which is actually a pretty big number.”

Cael says the team’s model could potentially be applied to predict the ocean’s future as a carbon sink, though uncertainty in temperature projections makes this a much more complicated goal.