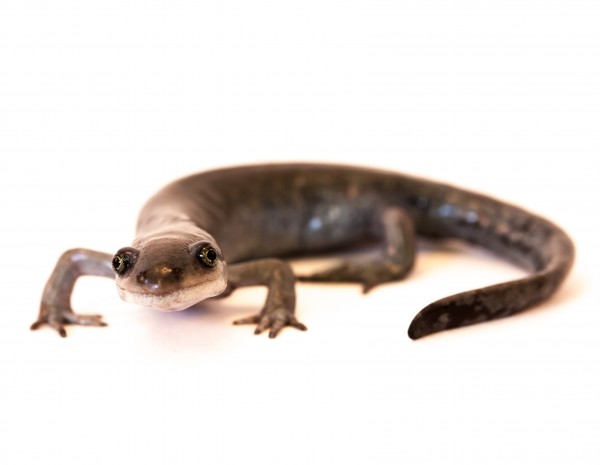 A salamander has found a simple genetic formula for success: Mate with multiple males and use equal parts of each partner’s genetic material in her offspring.

A University of Iowa–led team of biologists analyzed the genome of Ambystoma, a six-million-year-old salamander lineage that produces only female offspring. The team found most of its genetic profile is made up of equal contributions from males of three separate salamander species—Ambystoma laterale, Ambystoma texanum, and Ambystoma tigrinum.

The researchers think the all-female salamander’s balanced genome points to the bizarre ways some animals—from all-female populations of fish, lizards, and others—can use their genomes to maximize their chances of success.

“We’re hypothesizing the successful individuals have balanced gene expression,” says Maurine Neiman, associate professor in biology at the UI and an author on the paper, published in the journal Genome Biology and Evolution. “This balance might have been a prerequisite for the emergence and continued success of this particular hybrid lineage.”

Sexual reproduction is dominant in the animal world. The unisexual Ambystomasalamander engages in sex, but with a slightly different purpose. When it mates, the female acquires the male’s genes and then keeps only some, discarding others. This is known as kleptogenesis, or the theft of genetic material from male donors for reproductive purposes.

The UI researchers wondered how choosy the unisexual female is about which genes it keeps and uses when mating with males from different sexual salamander species. Using a specimen from the lab of Ohio State University biologist and study co-author H. Lisle Gibbs, the team analyzed nearly 3,000 genes in a unisexual female with three genomes (called a triploid). Of that total, they found 72 percent of the genes provided by the three male partners were expressed equally.

In other words, the all-female salamander chose to use roughly the same number of genes from each salamander species.

“It’s mostly balanced. The three genomes are mostly being expressed equally in this hybrid,” says Kyle McElroy, a graduate student in Neiman’s lab and the paper’s corresponding author. “What we’d like to find out is how the choosing and using occurs, and how these genes from different sexual salamander species come together to make a successful hybrid.”

It could be a case of keeping things simple. McElroy likens it to a sports team having a roster of equally competent players, with no star athlete whose injury would cripple its success.

“If you have a team that’s unbalanced and loses a top player, you won’t win,” says McElroy, a fourth-year graduate student from St. Louis. “But if every player is equal, then you don’t lose as much.”

So, rather than the female salamander individually selecting genes from the thousands available to her—a complicated process—the salamander appears to have found a balanced ratio of genes from the males of the other three species that works for her, and has settled on that.

“It would be difficult to maintain without balance,” McElroy says, “and that may be the key to this hybrid’s success.”