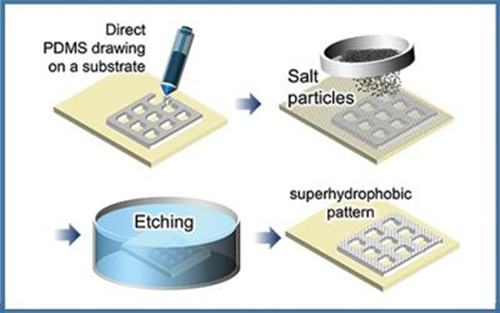 Researchers may have found a cost-effective and environmentally friendly method of applying a superhyydrophobic layer to objects, which are used in anti-icing, anti-sticking and self-cleaning applications.

A team of researchers with the Department of Mechanical Engineering at Pohang University of Science and Technology (POSTECH) has developed the superhydrophobic layer using commercially available salt particles, polydimethylsiloxane (PDMS) and water.

Scientists have attempted to apply the lotus effect—the process where water droplets along with any dirt particles on the surface roll off a leaf—to other surfaces by simulating similar micro- and nanoscopic surface architectures in the past, but applying a superhydrophobic layer requires complicated procedures with exorbitant equipment costs and harsh chemicals, making a stain repellent fabric or self-cleaning building difficult to implement.

The research team was able to overcome those barriers by utilizing a salt-dissolution-assisted etching process, taking advantage of the fact that salt readily dissolves in water.

A salt-particle-embedded PDMSD surface was exposed to an aqueous environment, while the remaining PDMS surface becomes roughened with micro/nano-hierarchical topography that satisfies the standards of superhydrophobic surfaces.

This process can be applied to large or three-dimensional surfaces.

The results were published in Applied Surface Science.