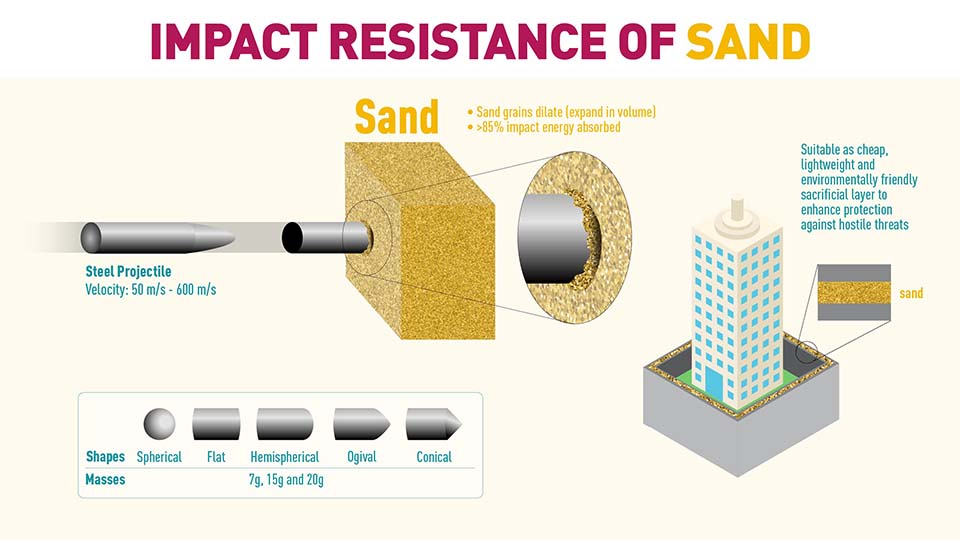 Sand grains dilate and dissipate pressure, resisting continual penetration of the projectile and making it a good alternative building material in the protection of critical infrastructure. Source: NUS

While sand has been used traditionally for military fortification, very little is known about the unique energy absorption capability of the material. In a recent study, a team of researchers from the National University of Singapore’s (NUS) Faculty of Engineering found that sand can absorb more than 85 per cent of the energy exerted against it, and its ability to resist the impact increases with the speed of the projectile, even at high velocities. In contrast, steel plates have poorer energy absorption capacity against high speed projectiles. This novel finding suggests that sand can potentially be used as a cheaper, lighter and more environmentally friendly alternative to enhance protection of critical infrastructure as well as armour systems.

Led by Assistant Professor Darren Chian Siau Chen from the Department of Civil and Environmental Engineering, the NUS research team made this novel discovery after conducting tests where projectiles of various shapes and masses were fired against a silica sand block. Silica sand is one of the world’s most common variety of sand.

“While the use of compacted sand for defence protection has long been practiced in military settings, there is still a lack of a detailed understanding on how it works to resist impact and how this resistance changes with the speed and geometry of the incoming projectile. Our study focuses on the energy absorption mechanism of sand – that is, how it performs against projectile penetration. Our findings show that sand holds a strong potential as a composite material for protection against impact,” said Asst Prof Chian.

The team, which includes Associate Professor Vincent Tan from the Department of Mechanical Engineering and Adjunct Assistant Professor Anand Sarma from the Department of Civil and Environmental Engineering, found that when a projectile is fired at a sand block at high speed, it absorbs more than 85 per cent of the energy exerted against it. The team also found that resistance offered by the sand block increases with the speed at which the projectile travels. Different nose shapes and masses of projectiles fired at a wide range of velocities were investigated.

The impact also results in an extreme frictional force that could potentially break the projectile into pieces. This is due to the pressure and friction offered by the sand grains, which dilate and resist continual penetration of the incoming projectile.

In contrast, energy absorption capacity of an equivalent steel plate reduces dramatically as the velocity of the projectile increases, resulting in the projectile passing through it without further obvious resistance. This is also known as the hydrodynamic effect, where steel behaves alike to a fluid without material strength with increasing velocity beyond the ballistic limit, which is the minimum velocity required for the projectile to penetrate the target.

Expanding the extensive applications of sand

The team believes that the findings of their study will further expand the wide-ranging applications of sand, which is currently being used extensively in areas such as glass making, building construction and land reclamation.

“These unique characteristics of sand may open up exciting new applications in areas that impact our daily lives, as well as in defence. For instance, steel, which is one of the key materials used in the construction of armour systems, can be partially replaced with sand as a cost-effective, environmentally friendly, and lightweight sacrificial layer, given its superior energy absorption performance. Given the possibility of hostile threats, sand could also be used as a complementary building material to steel to enhance protection of critical infrastructures and household shelters, given its projectile-resisting function,” added Asst Prof Chian.

Moving forward, the NUS team intends to carry out larger scale trials to establish the full potential performance of sand for impact resistance. To further tap on the penetration inhibiting property of sand, the researchers will also explore integrating the sand layer with other compliant materials for possible application in critical infrastructure protection. In addition, the research team will look into the energy absorption capabilities of similar geomaterials such as rock rubble.