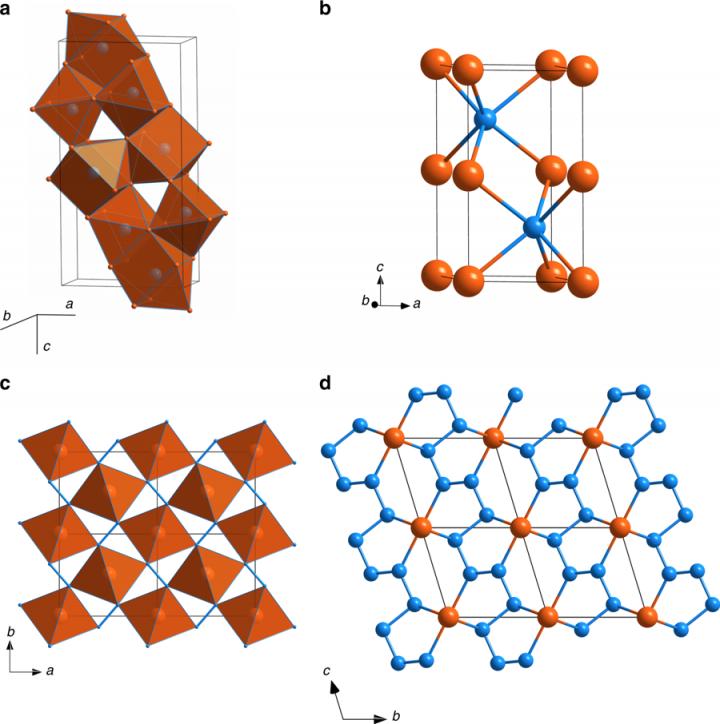 Crystal structures of iron-nitrogen compounds. Orange and blue balls show the positions of Fe and N atoms, respectively. a Fe3N2 at 50?GPa. The structure is built of quadrilateral face-capped trigonal prisms NFe7, which are interconnected by sharing trigonal faces and edges. b FeN at 50?GPa with NiAs structure type. c FeN2 at 58?GPa; Shown are the FeN6 octahedra, which are connected into infinite chains through common edges and aligned along the c-axis. These chains are interconnected through common vertices. Additional linkage between FeN6 octahedra is provided via N-N bonds. d FeN4 at 135?GPa. In the structure of FeN4, each Fe atom is a member of two non-planar five-member Fe[N4] metallacycles, which are almost parallel to the (1-10) lattice plane. Nitrogen atoms form infinite zigzag chains, running along the c-direction.

Scientists from NUST MISIS and colleagues from the University of Bayreuth, the University of Münster (Germany), the University of Chicago (U.S.), and Linköping University (Sweden) have created nitrides, a material previously considered impossible to obtain. More amazing, they have shown that the material can be obtained using a very simple method of direct synthesis. Articles about the revolutionary research results have been published in Nature Communications and Angewandte Chemie International Edition.

Nitrides are actively used in superhard coatings and electronics. Usually, the nitrogen content in these materials is low, and it is therefore difficult to get the nitrogen levels to exceed the levels of transition metals (as the nitrogen bonds are too high energy).

Compounds rhenium and iron, which the researchers chose for the experiments, embody this problem particularly well. As such, the researchers decided to change the synthesis from ordinary conditions on Earth to a condition of ultra-high pressure.

«This method is one of the most promising ways to create new high quality materials, and it opens up fantastic opportunities. There are well-known examples like artificial diamonds and cubic boron nitride (CBN), which existed in a natural form. However the idea to consciously create materials that are impossible [to make] in nature is our know-how», commented Igor Abrikosov, Head of the NUST MISIS Laboratory for the Modelling & Development of New Materials.

According to Abrikosov, the experiments produced results almost immediately. Nitrogen, together with a transition metal, is placed into a diamond anvil cell, and a simple direct synthesis is carried out under high pressure.

Abrikosov believes the research group will later clarify whether the materials are superconductors or magnets, and whether they are suitable for spintronics.

Their backward chaining requires more experimental facilities for further analysis. Those facilities are already underway however, and are likely to bear fruit within the next year.

If the research team proves the material’s assumed superhardness, then within 5 years we will be able to see the «impossible» materials being used in commercial fields.