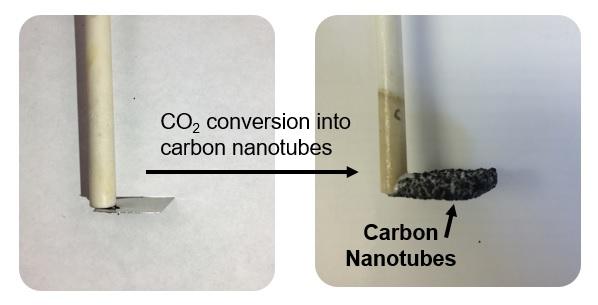 These are small diameter carbon nanotubes grown on a stainless steel surface.

Scientists have found a cheaper way to make one of the world’s strongest and most useful materials.

A team from Vanderbilt University has developed a new and cheaper method to convert carbon dioxide into carbon nanotubes with small diameters, supermaterials that can be stronger than steel and more conductive than copper.

“One of the most exciting things about what we’ve done is use electrochemistry to pull apart carbon dioxide into elemental constituents of carbon and oxygen and stitch together, with nanometer precision, those carbon atoms into new forms of matter,” Assistant Professor of Mechanical Engineering Cary Pint said in a statement. “That opens the door to being able to generate really valuable products with carbon nanotubes. These could revolutionize the world.”

According to the study, small-diameter carbon nanotubes often require increased sophistication and control in synthesis processes, but exhibit improved physical properties and greater economic value over their larger-diameter counterparts.

However, they overcame some of the hurdles by tuning electrochemical parameters to minimize the size of the larger nanoparticles.

The nanoparticles produced are about 10,000 times smaller than a human hair and can be produced from coatings on stainless steel surfaces.

While carbon nanotubes can be used in several applications like batteries and tires due to their combination of properties, they are often too expensive to be practically used on a large scale.

“The cheapest carbon nanotubes on the market cost around $100-200 per kilogram,” interdisciplinary material science PhD student Anna Douglas said in a statement. “Our research advance demonstrates a pathway to synthesize carbon nanotubes better in quality than these materials with lower cost and using carbon dioxide captured from the air.”

To further develop the technology, the researchers founded SkyNano LLC, which will allow the team to focus on building the science of the process to scale up and commercialize products from the carbon nanotubes.

“What we’ve learned is the science that opens the door to now build some of the most valuable materials in our world, such as diamonds and single-walled carbon nanotubes, from carbon dioxide that we capture from air through our process,” Pint said.