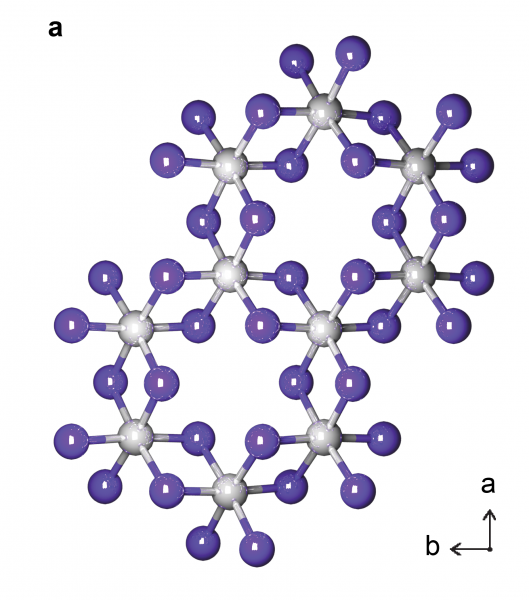 Top-view depiction of a CrI3 lattice. Cr atoms are in grey, I atoms are in purple. Credit: Efren Navarro-Moratalla

Magnetic materials form the basis of technologies that play increasingly pivotal roles in our lives today, including sensing and hard-disk data storage. But as our innovative dreams conjure wishes for ever-smaller and faster devices, researchers are seeking new magnetic materials that are more compact, more efficient and can be controlled using precise, reliable methods.

A team led by the University of Washington and the Massachusetts Institute of Technology has for the first time discovered magnetism in the 2-D world of monolayers, or materials that are formed by a single atomic layer. The findings, published June 8 in the journal Nature, demonstrate that magnetic properties can exist even in the 2-D realm — opening a world of potential applications.

“What we have discovered here is an isolated 2-D material with intrinsic magnetism, and the magnetism in the system is highly robust,” said Xiaodong Xu, a UW professor of physics and of materials science and engineering, and member of the UW’s Clean Energy Institute. “We envision that new information technologies may emerge based on these new 2-D magnets.”

Xu and MIT physics professor Pablo Jarillo-Herrero led the international team of scientists who proved that the material — chromium triiodide, or CrI3 — has magnetic properties in its monolayer form.

Other groups, including co-author Michael McGuire at the Oak Ridge National Laboratory, had previously shown that CrI3— in its multilayered, 3-D, bulk crystal form — is ferromagnetic. In ferromagnetic materials, the “spins” of constituent electrons, analogous to tiny, subatomic magnets, align in the same direction even without an external magnetic field.

But no 3-D magnetic substance had previously retained its magnetic properties when thinned down to a single atomic sheet. In fact, monolayer materials can demonstrate unique properties not seen in their multilayered, 3-D forms.

“You simply cannot accurately predict what the electric, magnetic, physical or chemical properties of a 2-D monolayer crystal will be based on the behavior of its 3-D bulk counterpart,” said co-lead author and UW doctoral student Bevin Huang.

Atoms within monolayer materials are considered “functionally” two-dimensional because the electrons can only travel within the atomic sheet, like pieces on a chessboard.             To discover the properties of CrI3 in its 2-D form, the team used Scotch tape to shave a monolayer of CrI3 off the larger, 3-D crystal form.

“Using Scotch tape to exfoliate a monolayer from its 3-D bulk crystal is surprisingly effective,” said co-lead author and UW doctoral student Genevieve Clark. “This simple, low-cost technique was first used to obtain graphene, the 2-D form of graphite, and has been used successfully since then with other materials.”

In ferromagnetic materials, the aligned spins of electrons leave a telltale signature when a beam of polarized light is reflected off the material’s surface. The researchers detected this signature in CrI3 using a special type of microscopy. It is the first definitive sign of intrinsic ferromagnetism in an isolated monolayer.

Surprisingly, in CrI3 flakes that are two layers thick, the optical signature disappeared. This indicates that the electron spins are oppositely aligned to one another, a term known as anti-ferromagnetic ordering. Ferromagnetism returned in three-layer CrI3. The scientists will need to conduct further studies to understand why CrI3 displayed these remarkable layer-dependent magnetic phases. But to Xu, these are just some of the truly unique properties revealed by combining monolayers.

“2-D monolayers alone offer exciting opportunities to study the drastic and precise electrical control of magnetic properties, which has been a challenge to realize using their 3-D bulk crystals,” said Xu. “But an even greater opportunity can arise when you stack monolayers with different physical properties together. There, you can get even more exotic phenomena not seen in the monolayer alone or in the 3-D bulk crystal.”

Much of Xu’s research centers on creating heterostructures, which are stacks of two different ultrathin materials. At the interface between the two materials, his team searches for new physical phenomena or new functions to allow potential applications in computing and information technologies.

In a related advance, Xu’s research group, UW electrical engineering and physics professor Kai-Mei Fu led a team of colleagues published a paper May 31 in Science Advances showing that an ultrathin form of CrI3, when stacked with a monolayer of tungsten diselenide, creates a ultraclean “heterostructure” interface with unique and unexpected photonic and magnetic properties.

“Heterostructures hold the greatest promise of realizing new applications in computing, database storage, communications and other applications we cannot even fathom yet,” said Xu.

Xu and his team would next like to investigate the magnetic properties unique to 2-D magnets and heterostructures that contain a CrI3 monolayer or bilayer.

The third co-lead author on the Nature paper is MIT researcher Efren Navarro-Moratalla. Other co-authors are Dahlia Klein at MIT; Ran Cheng and Di Xiao at Carnegie Mellon University; Kyle Seyler, Ding Zhong, Emma Schmidgall and David Cobden at the UW; and Wang Yao at the University of Hong Kong. Seyler, Zhong and Xiayu Linpeng, who are all UW doctoral students, are co-lead authors on the Science Advances paper.

The UW researchers for the Nature publication were funded by the Department of Energy and a University of Washington Innovation Award.