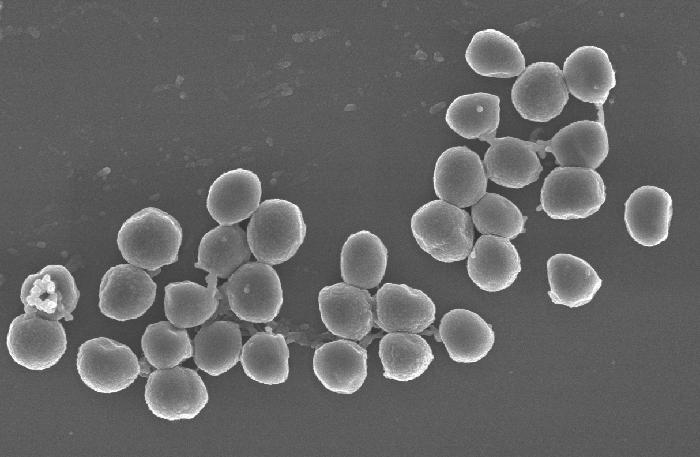 Scientists at the UNC School of Medicine have found that a bacterium can become much more or less susceptible to an antibiotic depending on the specific bacterial community in its midst.

The scientists found specifically that the bacterium Pseudomonas aeruginosa can produce specific molecular factors that dramatically increase or decrease an antibiotic’s ability to kill Staphylococcus aureus, another bacterium that often co-infects with P. aeruginosa.

The findings, published in PLoS Biology, point to the possibility of new antibiotics employing these factors to enhance antibiotic susceptibility.

The research also shows how understanding the precise mix of bacteria and their interactions could become a standard part of clinical practice in treating bacterial infections, especially the more dangerous infections involving antibiotic resistance. Doctors currently gauge the antibiotic susceptibility of an infecting bacterial species by examining it in isolation from other species.

Resistance to antibiotics by bacteria and other microbes is an ongoing public health crisis, contributing to about two million infections and 23,000 deaths per year in the United States, according to the Centers for Disease Control and Prevention. P. aeruginosa, for instance, is a multidrug-resistant pathogen associated with hospital-acquired infections, including ventilator-associated pneumonia. As for S. aureus¬, some strains do not cause disease. Others cause the classic “staph” infections that antibiotics do kill. Other strains, though, are antibiotic-resistant.

Researchers have been racing to find ways to overcome the resistance of these and other bacteria.

One clue in the race to overcome antibiotic resistance that Conlon and colleagues uncovered is that S. aureus sometimes adopts a slow-growing, “low-energy” state that makes it more difficult to kill with antibiotics. Conlon’s team hypothesized that this low-energy state might arise from inter-species competition. In other words, a co-infecting bacterial species might have evolved the capability to produce factors that put microbial competitors at a disadvantage. Such factors may include toxins, enzymes, or various bacterial components unique to specific strains.

“We know that P. aeruginosa commonly co-infects with S. aureus and secretes factors that mess with S. aureus‘s metabolism,” Conlon said. “So our hypothesis was that this interaction might be throwing S. aureus into a more antibiotic-resistant state.”

Conlon and colleagues, including first author Lauren Radlinski, a graduate student in the Conlon Laboratory who performed most of the experiments, investigated this possibility in the new study. They set up a panel of S. aureus cultures, exposed them to molecules secreted by 14 different P. aeruginosa strains, and then tested the susceptibility of each culture to one of three antibiotics: vancomycin, tobramycin, and ciprofloxacin.

The results were striking and have implications for clinical practice.

“Factors secreted by eight of the P. aeruginosa strains, for example, induced 100 to 1000 times more killing of S. aureus by vancomycin, compared to the control culture of S. aureus that was not exposed to P. aeruginosa factors,” Conlon said.

The researchers identified three specific P. aeruginosa factors that accounted for these effects:

Another approach would be to develop simple bacterial genetic tests that enable doctors to detect when a co-infecting bacterium is likely secreting factors that significantly influence antibiotic susceptibility.

Conlon’s team is now sequencing P. aeruginosa strains to see how gene sequences vary between strains and how this variance affects the ability of these strains to produce the aforementioned factors Conlon’s lab has described.