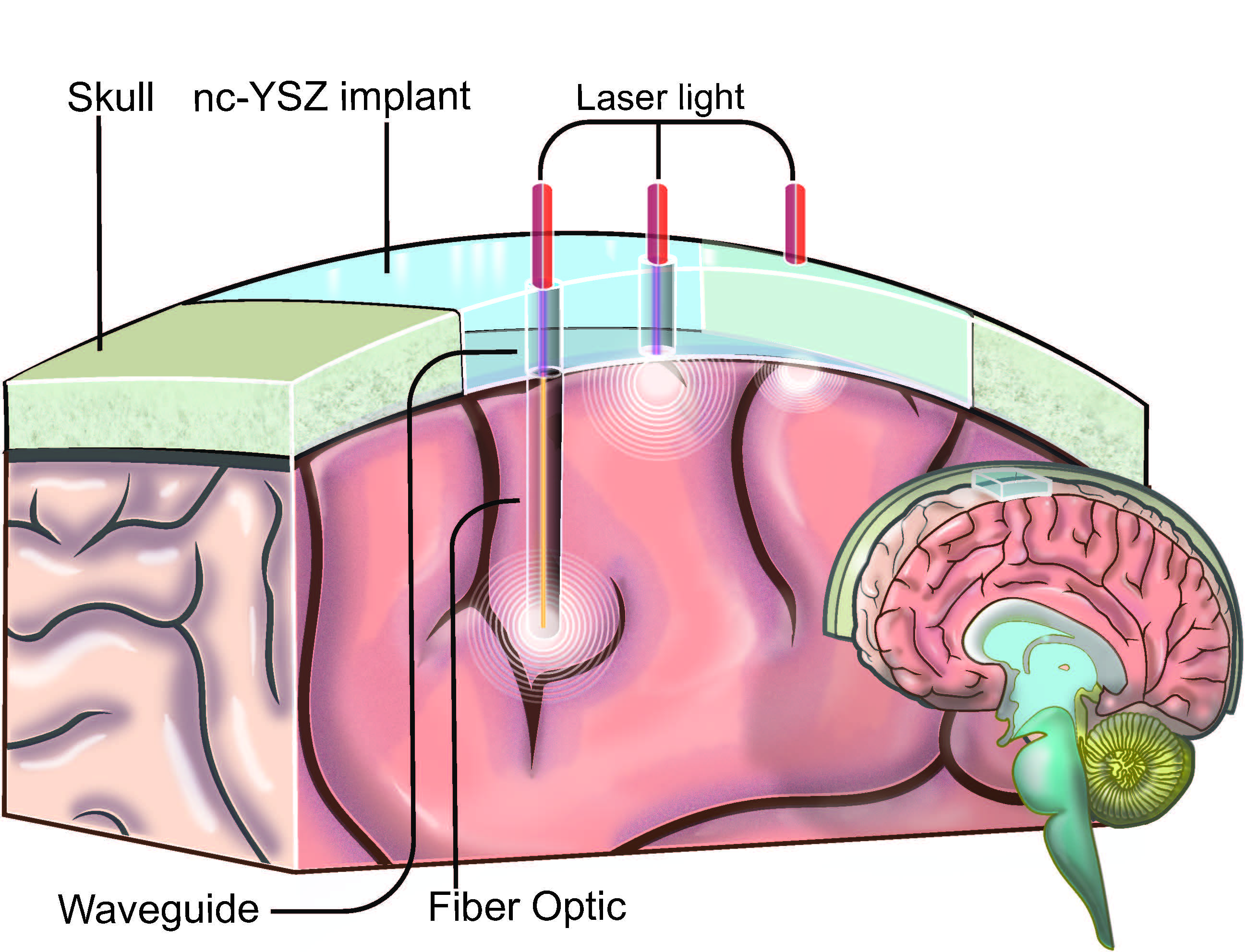 This is an illustration showing how the “Window to the Brain” transparent skull implant created by UC Riverside researchers would work. Credit: UC Riverside

Researchers at the University of California, Riverside are bringing their idea for a ‘Window to the Brain’ transparent skull implant closer to reality through the findings of two studies that are forthcoming in the journals Lasers in Surgery and Medicine and Nanomedicine: Nanotechnology, Biology and Medicine.

The implant under development, which literally provides a ‘window to the brain,’ will allow doctors to deliver minimally invasive, laser-based treatments to patients with life-threatening neurological disorders, such as brain cancers, traumatic brain injuries, neurodegenerative diseases and stroke. The recent studies highlight both the biocompatibility of the implant material and its ability to endure bacterial infections.

The Window to the Brain project is a multi-institution, interdisciplinary partnership led by Guillermo Aguilar, professor of mechanical engineering in UCR’s Bourns College of Engineering, and Santiago Camacho-López, from the Centro de Investigación Científica y de Educación Superior de Ensenada (CICESE) in Mexico.

The project began when Aguilar and his team developed a transparent version of the material yttria-stabilized zirconia (YSZ)–the same ceramic product used in hip implants and dental crowns. By using this as a window-like implant, the team hopes doctors will be able to aim laser-based treatments into patients’ brains on demand and without having to perform repeated craniotomies, which are highly invasive procedures used to access the brain.

The internal toughness of YSZ, which is more impact resistant than glass-based materials developed by other researchers, also makes it the only transparent skull implant that could conceivably be used in humans. The two recent studies further support YSZ as a promising alternative for currently available cranial implants.

Published July 8 in Lasers in Surgery and Medicine, the most recent study demonstrates how the use of transparent YSZ may allow doctors to combat bacterial infections, which are a leading reason for cranial implant failure. In lab studies, the researchers treated E-Coli infections by aiming laser light through the implant without having to remove it and without damaging the surrounding tissues.

“This was an important finding because it showed that the combination of our transparent implant and laser-based therapies enables us to treat not only brain disorders, but also to tackle bacterial infections that are common after cranial implants. These infections are especially challenging to treat because many antibiotics do not penetrate the blood brain barrier,” said Devin Binder, M.D., a neurosurgeon and neuroscientist in UCR’s School of Medicine and a collaborator on the project.

Another recent study, published in the journal Nanomedicine: Nanotechnology, Biology and Medicine, explored the biocompatibility of YSZ in an animal model, where it integrated into the host tissue without causing an immune response or other adverse effects.

“The YSZ was actually found to be more biocompatible than currently available materials, such as titanium or thermo-plastic polymers, so this was another piece of good news in our development of transparent YSZ as the material of choice for cranial implants,” Aguilar said.

Last October, the team received almost $5 million to advance the project over five years. $3.6 million was from the National Science Foundation’s Partnerships in International Research and Education (PIRE) program, which pairs U.S. universities with others around the world. An additional $1 million was from Consejo Nacional de Ciencia y Tecnología (CONACYT), Mexico’s entity in charge of promoting scientific and technological activities. The remainder of the money came from in-kind contributions from the Mexican universities.

The team’s long-term goal is to see the technology become the standard of care for patients with brain disorders who would benefit from laser-based treatments.