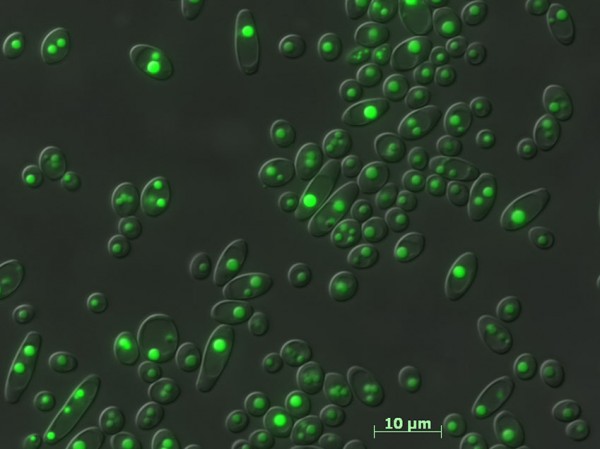 Yarrowia cells, at the initiation of lipogenesis, were metabolically engineered to overproduce oil. Credit: Image courtesy of the Stephanopoulos Lab

With the depletion of fossil fuels, biodiesel is a promising option. Biodiesel precursors made by oil-producing yeast from renewable sources are an alternative to fossil- and food-crops-derived fuels. However, production of the needed oils are still too low to be commercially competitive. A team at the Massachusetts Institute of Technology improved lipid production by 25 percent, relative to existing oil-producing yeast strains. They got this result by rewiring the metabolism in a yeast known for its naturally high lipid production.

Diesel is used to power large vehicles (such as trucks). It is a sought-after fuel source due to its higher fuel efficiency and energy density. However, until now, advances in microbial production of biodiesel have not been significant enough to make it near to a commercially viable option. The concentration (titer), yield, and productivity of oil achieved in this engineered yeast strain using sugar as food source are close to those required to make microbial conversion for fuels commercially viable.

The researchers used a mathematical model to identify the bottlenecks in the production of oil in the industrial yeast Yarrowia lipolytica. With the information provided by the model, they designed several metabolic engineering strategies to increase conversion of surplus NADH (a product of glucose degradation) to NADPH, which is needed for lipid biosynthesis. Of the strategies tested, a combination of the two resulted in the most effective lipid yield improvement. The team introduced heterologous yeast and bacterial glyceraldehyde-3-phosphate dehydrogenase (GDP) genes that utilize NADP+ instead of NAD+ w into Y. lipolytica. The team overexpressed an additional bacterialgene in this strain to produce malic enzyme. They combined strategy resulted in an improvement of 25 percent over previously engineered yeasts. In addition, as the engineered Y. lipolytica required less oxygen, it could be grown at higher density in the bioreactor, further increasing biomass and lipid yields. Scientists and engineers could optimize the redox engineering approach reported in this work to convert plant biomass into biofuel precursors and other U.S. Department of Energy-relevant bioproducts.

This work was supported by the Office of Biological and Environmental Research within the U.S. Department of Energy’s Office of Science, award DE-SC0008744