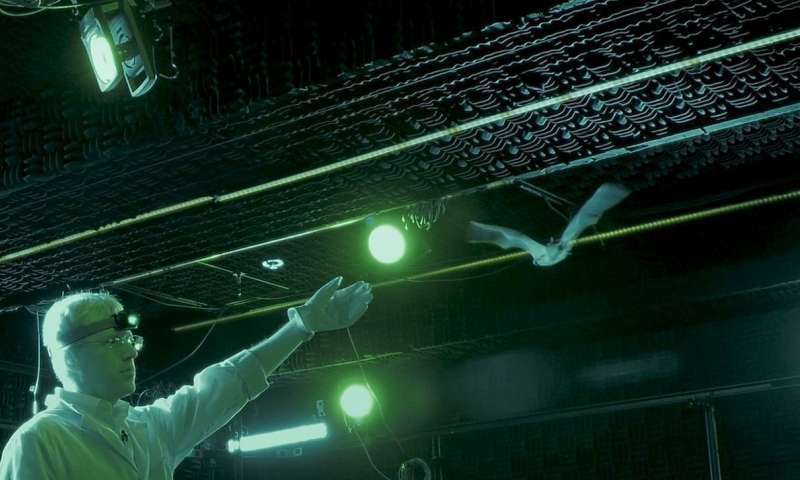 A bat fitted with wireless brain activity recording equipment flies in a room equipped with high-speed cameras and an array of microphones to pick up echolocation calls. Credit: Dave Schmelick and Len Turner/Johns Hopkins University

Johns Hopkins University researchers have developed a way to study the brain of a bat as it flies, recording for the first time what happens as a roving animal focuses and refocuses its attention.

This groundbreaking advance allows us to see what happens in the brains of naturally behaving animals, uninhibited by laboratory constraints. Because bats share the same basic brain structure as all mammals, including humans, the achievement, published today in the journal eLife, deepens our understanding of what happens in the brain as we move through the world.

“If you want to understand how the brain operates in the real world, you have to have the animal moving through the world in a natural way,” said co-author Melville Wohlgemuth, a postdoctoral fellow. “This idea of recording the brain without wires is brand new. And no one has used it to understand how an animal senses the world and reacts to that information.”

To study a bat as it flew, the team first needed a wireless recording device that wouldn’t weigh down an animal that itself weighs less than an ounce.

Such a device took about a year to develop with the help of an outside engineering firm, and then another year of trial and error to perfect. The team also equipped a “flight room” with high-speed cameras and an array of microphones to pick up the bat’s echolocation calls.

None of this existed 25 years ago when senior author Cynthia Moss, a professor of psychological and brain sciences at Johns Hopkins, first dreamed of studying a bat as it flew. Until now, researchers have been limited to observing the brains of stationary animals engaged in simple and often contrived behaviors—like watching a pixel on a computer screen. They could learn from the brain of an immobile bat, but an artificial circumstance can only reveal so much about how the brain behaves in a real-world situation.

And in the real world, what bats and other animals typically do is move.

“Twenty-five years ago, I was talking with a colleague about recording neural activity from a free-flying bat, and he looked at me like I had two heads,” Moss said. “It has taken a lot of effort and advancement in technology to make this possible.”

The Johns Hopkins team is among the first in the world to wirelessly record brain activity, and the first to do it as an animal moved through space, shifting its attention from object to object. Bats produce high frequency sounds that bounce off objects, and they listen to echoes to “see” where the objects are in the environment.

The team was ultimately able to combine data about the bat’s location, the time of the bat’s vocalizations, and the bat’s brain activity, to determine which objects caused neurons to fire and, therefore, what the bat was paying attention to.

As a bat focused on objects, the researchers observed bursts of activity in certain midbrain cells—something that would likely happen when any animal, including humans, shifts attention.

“We can see how the moving animal interacts with objects, just like a person would walking in the woods,” Wohlgemuth said.

Finally observing brain activity in a free-moving animal was monumental for the authors, who see much potential in using the technique for future studies.

“To see signals in the brain when an animal is really looking at something and then to see a neuron fire, was the holy grail for me,” said co-author Ninad Kothari, a graduate student. “As this research goes forward, we can take the information we get from animals like bats, mice and owls and put it into human terms to potentially help people with attention deficits.”