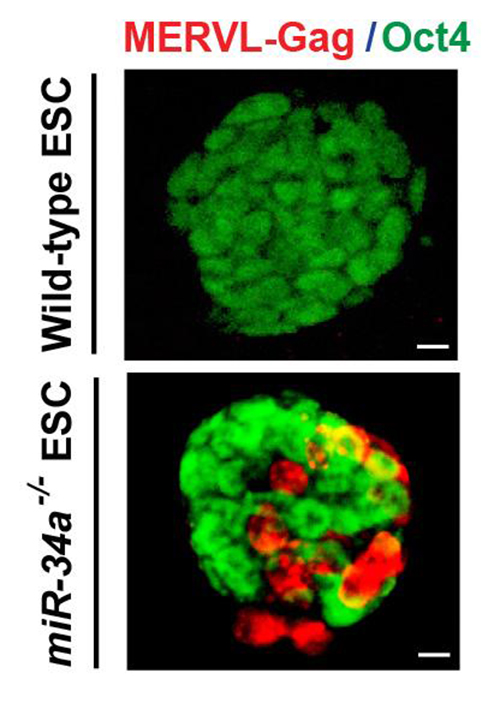 miR-34a-deficient embryonic stem cell culture is enriched with cells with expanded developmental potential as shown by their strong MuERV-L induction (red). These cells are distinct from the classic embryonic stem cells shown by the Oct4 staining (green). MuERV-L are the family of murine endogenous retroviruses activated in the very early embryo. (Credit:Lin He, UC Berkeley)

Researchers from the University of California, Berkeley, have found a way to reprogram mouse embryonic stem cells so that they exhibit developmental characteristics resembling those of fertilized eggs, or zygotes.

These “totipotent-like” stem cells are able to generate not only all cell types within a developing embryo, but also cell types that facilitate nutrient exchange between the embryo and the mother.

For now, the new stem cell lines UC Berkeley researchers have created will help scientists understand the first molecular decisions made in the early embryo. Ultimately, however, these insights could broaden the repertoire of tissues that can be generated from stem cells, with significant implications for regenerative medicine and stem cell-based therapy.

A fertilized egg is thought to possess full developmental potential, able to generate all cell types required for embryo gestation, including the developing embryo and its extra-embryonic tissues. A unique feature of placental mammals, extra-embryonic tissues such as the placenta and yolk sac are vital for nutrient and waste exchange between the fetus and mother.

“Studies on embryonic development greatly benefit from the culture system of embryonic stem cells and, more recently, induced pluripotent stem cells. These experimental systems allow scientists to dissect key molecular pathways that specify cell fate decisions in embryonic development,” said team leader Lin He, a UC Berkeley associate professor of molecular and cell biology. “But the unique developmental potential of a zygote, formed right after the sperm and egg meet, is very, very difficult to study, due to limited materials and the lack of a cell-culture experimental system.”

She and her colleagues reported their research online Jan. 12 in advance of print publication in the journal Science.

Embryonic stem (ES) cells, harvested from three-and-a-half-day-old mouse embryos or five-and-a-half-day-old human embryos, are referred to as pluripotent because they can become any of the thousands of cell types in the body. They have generated excitement over the past few decades because scientists can study them in the laboratory to discover the genetic switches that control the development of specialized tissues in the embryo and fetus, and also because of their potential to replace body tissues that have broken down, such as pancreatic cells in those with diabetes or heart muscle cells in those with congestive heart failure. These stem cells can also let researchers study the early stages of genetic disease.

As an alternative to harvesting them from embryos, scientists can also obtain pluripotent stem cells by treating mature somatic cells with a cocktail of transcription factors to regress them so that they are nearly as flexible as embryonic stem cells. These artificially derived stem cells are called induced pluripotent stem (iPS) cells.

Neither ES nor iPS cells, however, are as flexible as the original fertilized egg, which can form extra-embryonic as well as embryonic tissues. By the time embryonic stem cells are harvested from a mouse or human embryo, the cells have already committed to either an embryonic or an extra-embryonic lineage.

MicroRNAs are small, non-coding RNAs that do not translate into proteins, yet have a profound impact on gene expression regulation. He and her colleagues found that a microRNA called miR-34a appears to be a brake preventing both ES and iPS cells from producing extra-embryonic tissues. When this microRNA was genetically removed, both ES and iPS cells were able to expand their developmental decisions to generate embryo cell types as well as placenta and yolk sac linages. In their experiments, about 20 percent of embryonic stem cells lacking the microRNA exhibited expanded fate potential. Furthermore, this effect could be maintained for up to a month in cell culture.

“What is quite amazing is that manipulating just a single microRNA was able to greatly expand cell fate decisions of embryonic stem cells,” He said. “This finding not only identifies a new mechanism that regulates totipotent stem cells, but also reveals the importance of non-coding RNAs in stem cell fate.”

Additionally, in this study, He’s group discovered an unexpected link between miR-34a and a specific class of mouse retrotransposons. Long regarded as “junk DNA,” retrotransposons are pieces of ancient foreign DNA that make up a large fraction of the mammalian genome. For decades, biologists assumed that these retrotransposons serve no purpose during normal development, but He’s findings suggest they may be closely tied to the decision-making of early embryos.

“An important open question is whether these retrotransposons are real drivers of developmental decision making,” said Todd MacFanlan, a co-author of the current study and a researcher at the Eunice Kennedy Shriver National Institute of Child Health and Human Development in Bethesda, Maryland.