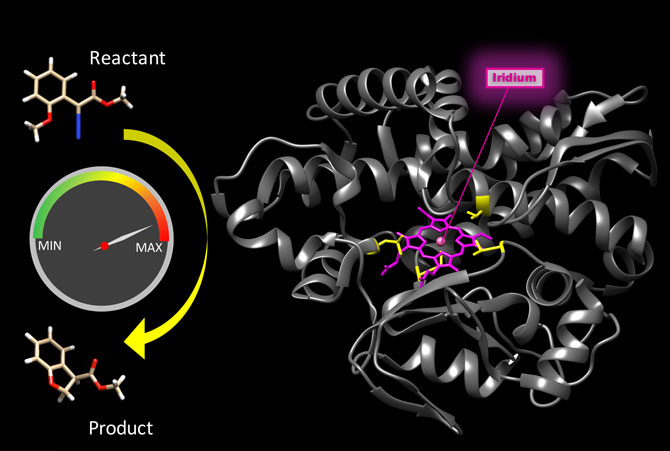 The natural enzyme CYP119 (gray ribbon) was modified both by incorporation of a metal site not found in nature (iridium porphyrin, pink) and by evolution (at sites shown in yellow). The resulting bionic enzyme not only catalyzed reactions not possible with natural enzymes (left), but did so at high speed, making this bionic enzyme the first of it class to be comparably fast to a natural counterpart. (Credit: Hanna Key/Berkeley Lab)

Bionic enzymes got a needed boost in speed thanks to new research at the Department of Energy’s Lawrence Berkeley National Laboratory (Berkeley Lab). By pairing a noble metal with a natural enzyme, scientists created a hybrid capable of churning out 2,550 product molecules per hour, a frequency comparable to biological counterparts.

The development, to be reported Thursday, Oct. 6, in the journal Science, represents a major advance for artificial metalloenzymes, which promise to open up a world of beneficial molecular products not currently possible with natural enzymes.

Earlier this year, Hartwig and his lab published a study in which they replaced the iron in the muscle protein myoglobin with iridium, a noble metal not found in living organisms. They demonstrated that the resulting hybrid is an enzyme that catalyzes a chemical reaction that no natural enzyme catalyzes.

The researchers chose myoglobin for that study because it is a well-studied protein that is easy to manipulate. It was an important proof of concept, but a key drawback was the new bionic enzyme’s relatively slow reaction speed. Reactions from comparable natural enzymes occur about 1,000 times faster.

“The artificial metalloenzymes we created made reactions occur faster than if the enzymes weren’t there at all, but the rates were still much slower than those of natural enzymes,” said Hartwig, who also holds an appointment as a UC Berkeley professor of chemistry.

As the need for speed is key in enzymatic reactions, the researchers switched the biological component from myoglobin to CYP119, part of a family of common enzymes called cytochrome P450, or CYPs. CYP proteins bind iron inside the organic molecule porphyrin and catalyze reactions of large and small organic molecules with oxygen, whereas myoglobin has evolved to simply bind oxygen.

“Our starting point was an enzyme so that we can more easily emulate the properties of a biological catalyst,” said study lead author Hanna Key, who did this work as a UC Berkeley graduate student. “We modified a system that we’ve reported before so that it better reflects the beneficial properties of an enzyme. The artificial metalloenzyme reflects both the reactivity of iridium metal and the selectivity and speed of a natural enzyme.”

Key worked with the other co-lead author of the study, Pawel Dydio, a former Berkeley Lab postdoctoral fellow who is now an assistant professor of chemistry at the University of Strasbourg in France.

They replaced iron porphyrin in the CYP119 enzyme with iridium porphyrin, and tested the resulting reactions catalyzed by the new hybrid. The revved up reaction rates were within an order of magnitude of the median rates for natural enzymes. This puts hybrid enzymes on a more competitive footing when matched up to their natural counterparts.

In addition to speed, the study authors noted other properties of their bionic enzyme that are characteristic of natural enzymes.

“We chose the CYP119 enzymes because they are known for being stable at high temperatures and high pressure, and they can bind large, organic molecules,” said Hartwig. “They can also be recycled; the catalyst is not consumed during the chemical reaction, so it can continue to be reused. For every molecule of the enzyme, 35,000 molecules of the product were produced.”

Key noted that a major critique of the field of artificial metalloenzymes is that it is not practical.

“Our study is an advance in the practicality of this approach,” said Key. “We can really start to exploit the attributes of each component.”

The scientists pointed out that among the compounds catalyzed by the new bionic enzyme, there are those considered medicinally active, making them potential candidates for future drug development.

One of the next steps, said Hartwig, is to design the enzyme so that it can assemble within a cell.