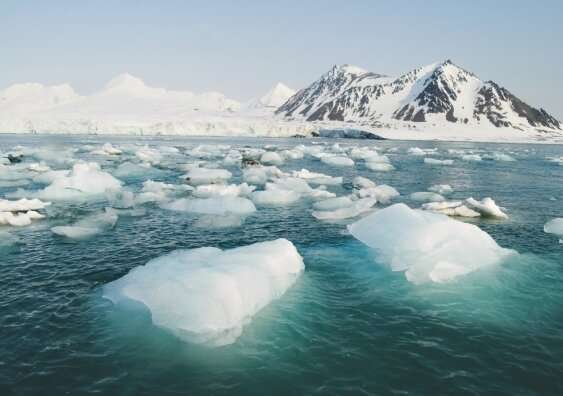 A new study looking at variations in past sea ice cover in the Norwegian Sea found the shrinkage and growth of ice was instrumental in several abrupt climate changes between 32,000 and 40,000 years ago.

The growth or shrinkage of sea ice is often viewed as a symptom of climate change, but new research shows it may have played a more causative role in abrupt climate changes thousands of years ago.

The study, which was published today in Science Advances, examined sediment core extracted from the Southern Norwegian sea to find that there were dramatic changes in the sea ice cover 32,000 to 40,000 years ago.

The study, which was led by Dr. Henrik Sadatzki from the Department of Earth Science and Bjerknes Centre for Climate Research, University of Bergen (Norway), analysed marine sediment cores from the Norwegian sea to reconstruct changes in sea ice during the last glacial period, focusing on the abrupt climate change events. This was complemented by climate model simulations of the last glacial period.

The abrupt climate changes – known as Dansgaard–Oeschger climate events – had global implications and comprised temperature shifts of up to 15°C over the Greenland ice sheet and happened within decades.

While the underlying mechanisms of these dramatic changes are not yet fully understood, the study confirms that changes in sea ice cover in the Norwegian Sea played a key role in driving the enigmatic events.

“To reach this conclusion, we looked at specific organic molecules in a sediment core from the southern Norwegian Sea, one of which was produced by algae that live in sea ice and others that were produced by organisms living in open, ice-free waters thousands of years ago.” Dr. Menviel says.

The data suggest that there were substantial changes in the sea ice cover in the southern Norwegian Sea between 32,000 and 40,000 years ago, according to Dr. Sadatzki.

Dr. Menviel says that the transient numerical simulations she performed highlighted the link between past changes in sea-ice in the Norwegian Sea, and the large-scale Atlantic meridional oceanic circulation.

“This provided us with an indication of the sensitivity of the system and showed the interplay between sea ice in this area, the oceanic circulation and climate,” she says.

The research suggests an enhanced sea ice cover contributed to insulation of the cold, high-latitude atmosphere from relatively warmer waters that were present in the Norwegian Sea beneath the sea ice lid. In turn, sea ice reduction allowed for heat release from the exposed Norwegian Sea waters to the atmosphere, which was a prime ingredient in shaping the abrupt warming of the Dansgaard-Oeschger climate events in Greenland.

These events have stirred lots of interest in documenting that the climate system contains mechanisms that may lead to large, abrupt and surprising climate changes.

The new observations suggest that the sea ice changes in the southern Norwegian Sea were an integral part of oceanic and atmospheric processes, which led to the abrupt glacial climate changes in Greenland and over large parts of the world.