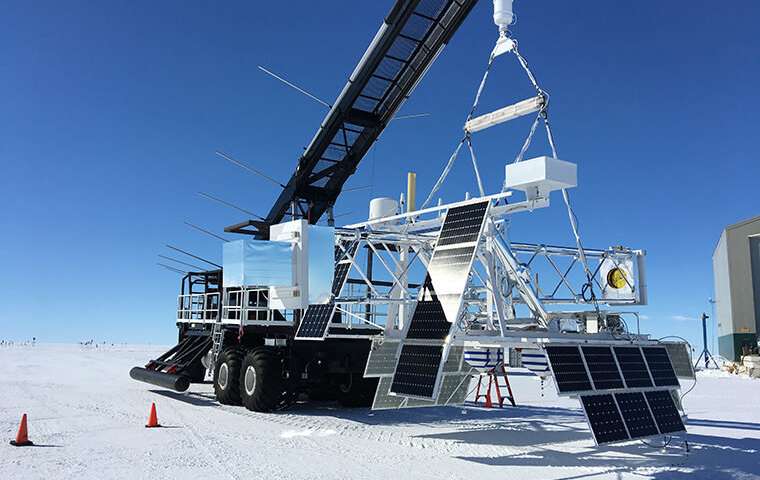 Panels are loaded onto X-Calibur in preparation for launch from McMurdo Station, Antarctica. Credit: Dana Braun

Washington University in St. Louis announced that its X-Calibur instrument, a telescope that measures the polarization of X-rays arriving from distant neutron stars, black holes and other exotic celestial bodies, launched today from McMurdo Station, Antarctica.

The telescope is carried aloft on a helium balloon intended to reach an altitude of 130,000 feet. At this height, X-Calibur will travel at nearly four times the cruising altitude of commercial airliners, and above 99 percent of the Earth’s atmosphere.

“Our prime observation target will be Vela X-1, a neutron star in binary orbit with a supergiant star,” said Henric Krawczynski, professor of physics in Arts & Sciences at Washington University. The team hopes to gain new insights into how neutron stars and black holes in a binary orbit with stars grow by gobbling up stellar matter.

Researchers will combine observations from the balloon-borne X-Calibur with simultaneous measurements from three existing, space-based satellites.

“The results from these different observatories will be combined to constrain the physical conditions close to the neutron star, and thus to use Vela X-1 as a laboratory to test the behavior of matter and magnetic fields in truly extreme conditions,” Krawczynski said.

X-Calibur will need to spend at least eight days aloft to gather enough data for scientists to consider it a success. During this time, the balloon is expected to make a single revolution around the Antarctic continent. If conditions permit, X-Calibur may be flown for additional days.

X-Calibur is designed to measure the polarization—or, roughly, the orientation of the electric field—of incoming X-rays from binary systems.

Researchers hope to use the Vela X-1 observations to reveal how neutron stars accelerate particles to high energies. The observations furthermore will test two of the most important theories in modern physics under extreme conditions: quantum electrodynamics and general relativity.

Quantum electrodynamics predicts that the quantum vacuum close to magnetized neutron stars exhibits birefringent properties—that is, it affects X-rays in a similar way as birefringent crystals such as sapphires or quartz affect optical light.