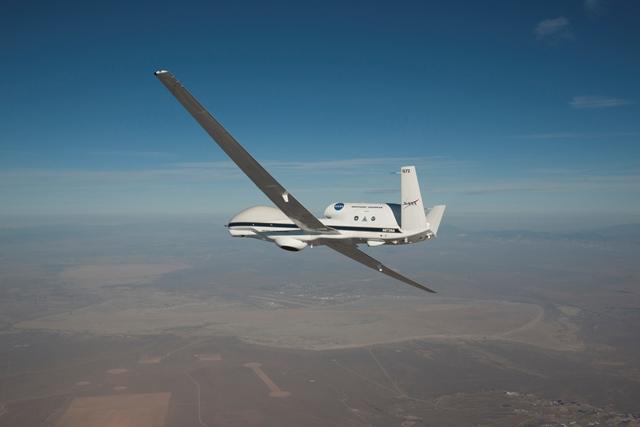 A NASA unmanned Global Hawk plane used to gather atmospheric data from hurricanes that formed in the Atlantic Ocean in 2016. To better predict hurricane intensity, scientists sponsored by the Office of Naval Research are studying this data to design more accurate weather-forecasting systems. Source: National Aeronautics and Space Administration

To better predict tropical cyclone intensity, scientists sponsored by the Office of Naval Research (ONR) recently worked with the National Aeronautics and Space Administration (NASA) and National Oceanic and Atmospheric Administration to gather atmospheric data from storms that formed in the Atlantic Ocean in 2016.

Fully developed tropical cyclones — variously called hurricanes, typhoons or cyclones, depending on their region–can grow as wide as several hundred miles and sustain winds faster than 150 miles per hour. For example, Typhoon Tip (1979) had 190-mph winds and Hurricane Patricia (2015) whipped up 215-mph winds (the record).

Such storms are notoriously difficult to predict, presenting a volatile meteorological cocktail that can change direction, speed and strength, quickly and unexpectedly. They pose a severe threat to U.S. Navy fleet operations–so accurate forecasting is critical for protecting ships at sea, evacuating vulnerable bases, and performing humanitarian assistance and disaster relief.

“Think about the ships, equipment, people and assets that must be moved to safety before a hurricane hits,” said Dr. Ronald Ferek, a program manager in ONR’s Ocean Battlespace Sensing Department. “This represents a huge investment of resources. If we can improve the lead time and accuracy of storm forecasts, it would give naval leadership more time and detailed information for preparations, evacuation or shelter-in-place decisions.”

The recent research involved flying NASA’s unmanned Global Hawk planes above hurricanes — more than 60,000 feet in the air — and deploying sensor-laden dropsondes. Dropsondes are parachute- and GPS-equipped devices that measure temperature, humidity, moisture, wind speed and direction, pressure and altitude — crucial factors in determining the potential strength and destructiveness of a hurricane.

The Global Hawks flew nine missions this year — dropping 647 dropsondes — culminating in three flights above Hurricane Matthew, a Category 5 storm that battered the East Coast in October. ONR is sponsoring efforts by the Naval Research Laboratory (NRL) and several universities to analyze and interpret the collected data, and integrate it into computerized prediction models.

“Dropsondes are valuable because they take numerous readings as they descend through the storm to the ocean’s surface,” said Dr. James Doyle, who works in NRL’s Marine Meteorology Division in Monterey, Calif. “This provides in-depth information about internal storm structure, and the environment surrounding the storm.”

This year’s work builds on the Coupled Ocean/Atmosphere Mesoscale Prediction System-Tropical Cyclone — COAMPS-TC, for short. This groundbreaking computer-forecasting tool was developed under ONR sponsorship and put into operations at the Fleet Numerical Meteorological and Oceanographic Center in 2013. COAMPS-TC uses complex algorithms to predict hurricane intensity by processing real-time and historical meteorological data, fed by information from satellites and remote-sensing stations.

Although weather forecasters have become better at forecasting a hurricane’s path and landfall, they struggle with predicting its strength. But Doyle said this is improving as unmanned planes like the Global Hawk enable data collection from the storm’s upper layer, which can rise over 60,000 feet in height. This layer is where tropical cyclones expel the air that ascends rapidly through deep thunderstorms found in the eyewall–where the greatest wind speed and precipitation are found.

Both Ferek and Doyle believe the upper layer dramatically impacts hurricane intensity. They’re especially interested in learning how jet streams interact with the upper layer–as well as its effects on the eyewall and secondary circulation (when hot, moist air flows upward from the storm’s bottom, fueling greater intensity).

Doyle’s team will use this year’s data to create an advanced version of COAMPS-TC for the 2017 season — and will further test this new version by simulating hurricanes that occurred worldwide from 2013-2016. The goal is to see how accurate previous predictions were and use the new information to improve future forecasting.