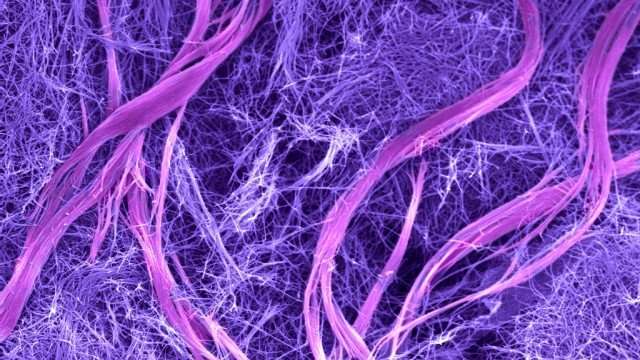 A new dynamic material that is able to change its properties could be used for sensors as well as deliver drugs and serve as tools for tissue regeneration.

Researchers from Northwestern University have created the soft materials that can autonomously self-assemble into molecular superstructures and then disassemble on command, ultimately changing the material properties through the process.

“We are used to thinking of materials as having a static set of properties,” Samuel Stupp, co-corresponding author of the paper, said in a statement. “We’ve demonstrated that we can create highly dynamic synthetic materials that can transform themselves by forming superstructures and can do so reversibly on demand, which is a real breakthrough with profound implications.”

Filaments that contain complementary DNA sequences that could form double helices were mixed to cause the DNA-containing molecules to jump out of their filaments and organize unique complex superstructures, leaving behind molecules without DNA that form simple filaments.

The DNA superstructures, which contain millions of molecules, appear like twisted bundles of filaments that reached dimensions on the order of microns in both length and width. This material is initially a soft hydrogel that becomes mechanically stiffer as the superstructures form.

The structures were also hierarchical—containing ordered structures at different size scales, similar to how natural materials like bone, muscle and wood are organized.

The researchers then discovered that by adding a simple DNA molecule they could disrupt the double helices interconnecting filaments in the superstructure. This causes the bundles to become undone, returning the material to its simple original structure and softer state.

To learn more about how this structure is able to achieve never before seen reversibility, the researchers developed simulations to shed light on the mechanics behind how and why the bundles formed and twisted. Here, they found that the molecules did not need DNA to bundle together and could be formed in principle by many other pairs of molecules with chemical structures that interact strongly with each other.

“Based upon our understanding of the mechanism, we predicted that just positive and negative charges on the surface of the filaments would be sufficient,” Erik Luijten, Professor and Chair of Materials Science and Engineering and Engineering Sciences and Applied Mathematics, said in a statement.

When the researchers created the same material using peptides instead of DNA, they discovered that the material self-assembled into superstructures that were also reversible when the changes were neutralized.

The team believes that the new material could carry and release needed proteins, antibodies and drugs into the body on demand as the hierarchical structures disappear. Scientists could also search for new materials in which the reversible superstructures lead to changes in electronic, optical or mechanical properties, or color and light emission.