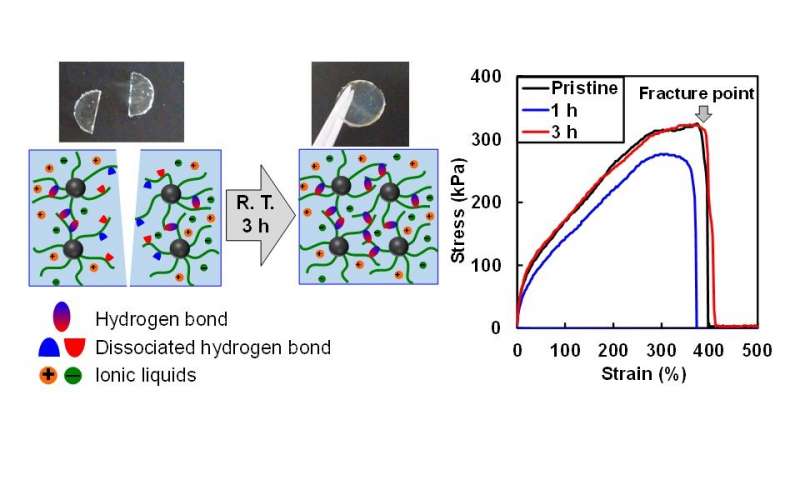 The ion gel exhibits fast self-healing ability at room temperature by reforming hydrogen bonds at the damaged surface. The fracture stress of the ion gel after healing 3 h is comparable to that of the pristine ion gel. Credit: Yokohama National University

A new tough, self-healing ion gel could yield a new class of materials to be used for flexible electronic devices.

A research team from Japan has created a new ion gel that can self-heal at ambient temperature without any additional external triggers or detectable changes in the environment like light or temperature.

The researchers, which includes scientists from Yokohama National University and the University of Tokyo, are the first to demonstrate that the introduction of hydrogen bonding into ion gels can improve their strength while giving the material the ability to self-heal at room temperature.

“Wearable electronic devices are expected to be stretched and bent many times during daily use,” Ryota Tamate, a corresponding author and a JSPS postdoctoral researcher at the Graduate School of Engineering at Yokohama National University, said in a statement. “If the ion gel used in the wearable device has a self-healing property, it may fix cracks and damages during the repeated stretching and bending, and improve the device’s durability.”

In the newly developed ion gel, the researchers were able to demonstrate its ability to heal quickly without external stimuli at room temperature. They also found that the material was extremely tough due to the multiple hydrogen bonds within the gel.

When a diblock copolymer is combined with the liquid salts, they form a final micellar structure that gives the material all of its desired qualities. The block of materials that is repelled by the ionic liquids make up the core of the gel, while the outside is made of chains that interact with one another through multiple hydrogen bonds.

“The self-healing process of this ion gel can be completed as quickly as within a few hours,” Tamate said. “Hydrogen bonding is reversible, and as a result, it is a promising interaction that contributes to a material’s ability to self-heal due to their reversible nature.

“In this study, by tuning the hydrogen bonding strength of polymer chains in ionic liquids, we utilized hydrogen bonding as a reversible cross-linking point of the ion gel,” he added. “Furthermore, we proved that the micellar structure formed by the diblock copolymer material significantly improved the physical strength and self-standing ability of the ion gel.”

According to Tamate, before the gel can be implanted into self-healing flexible electronics, the researchers need to investigate the gel’s durability under various physically straining conditions.

“In addition, as the present diblock copolymer tends to absorb moisture from the air, we would like to seek other interactions between structures composed of several molecules that are stable in an open atmosphere for a long time,” he said. “In addition, as physical properties of ionic liquids can be widely tuned by selection of cations and anions, the combination with different ionic liquids will be investigated.”