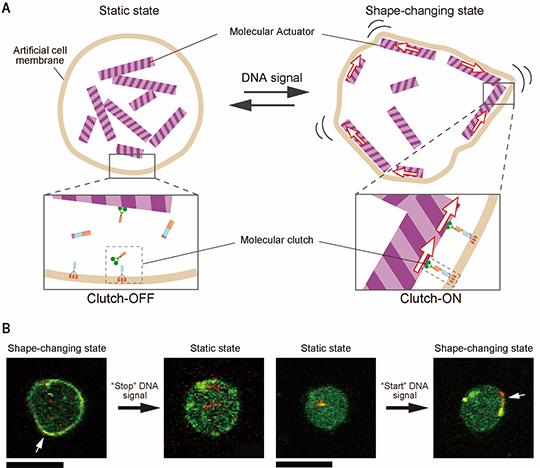 Scientists in Japan have developed a molecular robot that can start and stop its shape-changing function in response to a specific DNA signal.

A research group from Tohoku University and the Japan Advanced Institute of Science and Technology have developed a molecular robot consisting of biomolecules including DNA and protein.

The researchers created the robot by integrating molecular machines into an artificial cell membrane, representing the first time a molecular robotic system has been able to recognize signals and control its shape-changing function.

This advancement could mean that molecular robots could function in a way similar to living organisms.

A molecular robot is an artificial molecular system that is built by integrating molecular machines. Researchers said such a system could lead to a bio-inspired robot designed on a molecular basis.

The robot developed in Japan is about one millionth of a meter—similar to the size of human cells— and consists of a molecular actuator composed of protein and a molecular clutch composed of DNA.

The robot can change the shape of its body with the actuator, while the transmission of the force generated by the actuator can be controlled by the molecular clutch.

“We constructed an amoeba-like molecular robot that can express continuous shape change in response to specific signal molecules,” the study states. “The robot is composed of a body, an actuator and an actuator-controlling device.

“The body is a vesicle made from a lipid bilayer and the actuator consists of proteins, kinesin, and microtubules. We made the clutch using designed DNA molecules.”

Through experiments, the research group demonstrated that the molecular robot could start and stop the shape-changing behavior in response to a specific DNA signal.

“With more than 20 chemicals at varying concentrations, it took us a year and a half to establish good conditions for working our molecular robots,” Shin-ichiro Nomura, an associate professor at Tohoku University’s Graduate School of Engineering and lead of the study, said in a statement. “It was exciting to see the robot shape-changing motion through the microscope.

“It meant our designed DNA clutch worked perfectly, despite the complex conditions inside the robot,” he added.

The breakthrough is also expected to significantly expand the possibilities of robotics engineering and could lead to developments that could help solve various medical issues by using a treatment robot for live culturing cells and a monitoring robot for checking environmental pollution.

“The paper by Nomura and coworkers represents a major step towards the development of autonomous soft microrobots,” Friedrich Simmel, Ph.D., a professor at the Technische Universität München in Germany, said in a statement. “Based on this achievement, in the future similar systems could be developed that display artificial phototaxis or chemotaxis, or similar ‘intelligent’ behavior.”

The study was published in Science Robotics