Imagine a single particle, only one-tenth the diameter of a bacterium, whose miniscule jiggles induce sustained vibrations in an entire mechanical device some 50 times larger. By taking clever advantage of the interplay between light, electrons on the surface of metals, and heat, researchers at the National Institute of Standards and Technology (NIST) have for the first time created a plasmomechanical oscillator (PMO), so named because it tightly couples plasmons — the collective oscillations of electrons at the surface of a metal nanoparticle — to the mechanical vibrations of the much larger device it’s embedded in.

The entire system, no bigger than a red blood cell, has myriad technological applications. It offers new ways to miniaturize mechanical oscillators, improve communication systems that depend on the modulation of light, dramatically amplify extremely weak mechanical and electrical signals and create exquisitely sensitive sensors for the tiny motions of nanoparticles.

NIST researchers Brian Roxworthy and Vladimir Aksyuk described their work in a recent issue of Optica.

The device consists of a gold nanoparticle, about 100 nanometers in diameter, embedded in a tiny cantilever — a miniature diving board — made of silicon nitride. An air gap lies sandwiched between these components and an underlying gold plate; the width of the gap is controlled by an electrostatic actuator—a thin gold film that sits atop the cantilever and bends toward the plate when a voltage is applied. The nanoparticle acts as a single plasmonic structure that has a natural, or resonant, frequency that varies with the size of the gap, just as tuning a guitar string changes the frequency at which the string reverberates.

When a light source, in this case laser light, shines on the system, it causes electrons in the resonator to oscillate, raising the temperature of the resonator. This sets the stage for a complex interchange between light, heat and mechanical vibrations in the PMO, endowing the system with several key properties. 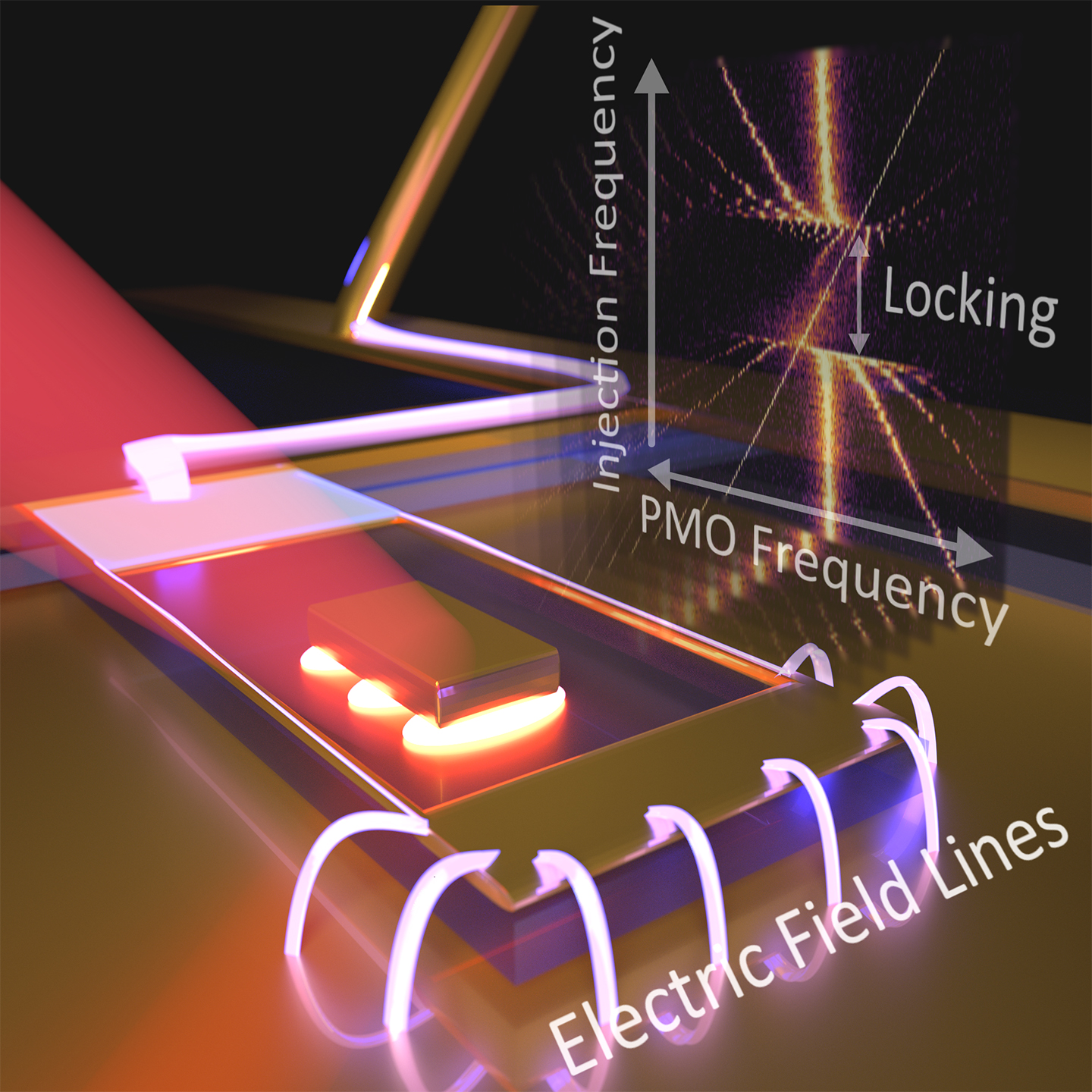 Schematic of the first-ever plasmomechanical oscillator (PMO), developed by NIST researchers. The orange-white ovals represent the localized plasmon oscillations. The cantilever, containing the gold cuboid nanoparticle, lies dead center. The series of white curves represents the electrical field applied to the cantilever. Data at right indicates that the device can lock onto and greatly amplify weak signals that oscillate at frequencies close to those of the PMO. Image: B. Roxworthy/NIST

By applying a small, direct-current voltage to the electrostatic actuator that squeezes the gap shut, Roxworthy and Aksyuk altered the optical frequency at which the resonator vibrates and the intensity of the laser light the system reflects. Such optomechanical coupling is highly desirable because it can modulate and control the flow of light on silicon chips and shape the propagation of light beams traveling in free space.

Crucially, the force exerted by the actuator always kicks the cantilever in the same direction in which the cantilever is already traveling. If the incident laser light is powerful enough, these kicks cause the cantilever to undergo self-sustaining oscillations with amplitudes thousands of times larger than the oscillations of the device due to the vibration of its own atoms at room temperature.

“This is the first time that a single plasmonic resonator with dimensions smaller than visible light has been shown to produce such self-sustaining oscillations of a mechanical device,” says Roxworthy.

The team also demonstrated for the first time that if the electrostatic actuator delivers a small mechanical force to the PMO that varies in time while the system undergoes these self-sustaining oscillations, the PMO can lock onto that tiny variable signal and greatly amplify it. The researchers showed that their device can amplify a faint signal from a neighboring system even when that signal’s amplitude is as small as ten trillionths of a meter. That ability could translate into vast improvements in detecting small oscillating signals, Roxworthy says.