NASA’s Near-Earth Asteroid Scout, a small satellite the size of a shoebox, designed to study asteroids close to Earth, performed a full-scale solar sail deployment test at ManTech NeXolve’s facility in Huntsville, Ala., on Sept. 13. The test was performed in an indoor cleanroom to ensure the deployment mechanism’s functionality after recent environmental testing.

NEA Scout is a six-unit CubeSat that relies on an innovative solar sail for propulsion. It is one of 13 secondary science payloads NASA selected to fly on the initial launch of NASA’s Space Launch System rocket. When deployed, the sail is square in shape with each side about the length of a school bus, and harnesses solar energy to use as propulsion to move through space. Instead of wind, solar sails reflect sunlight for thrust, minimizing the need for fuel. This method results in cost savings due to the reduced weight and size of the payload with reduced fuel and provides the satellite with the ability to travel through space. The NEA Scout solar sail will deploy from the spacecraft using four arms — called booms — to hold the sail, much like a sail on a ship. 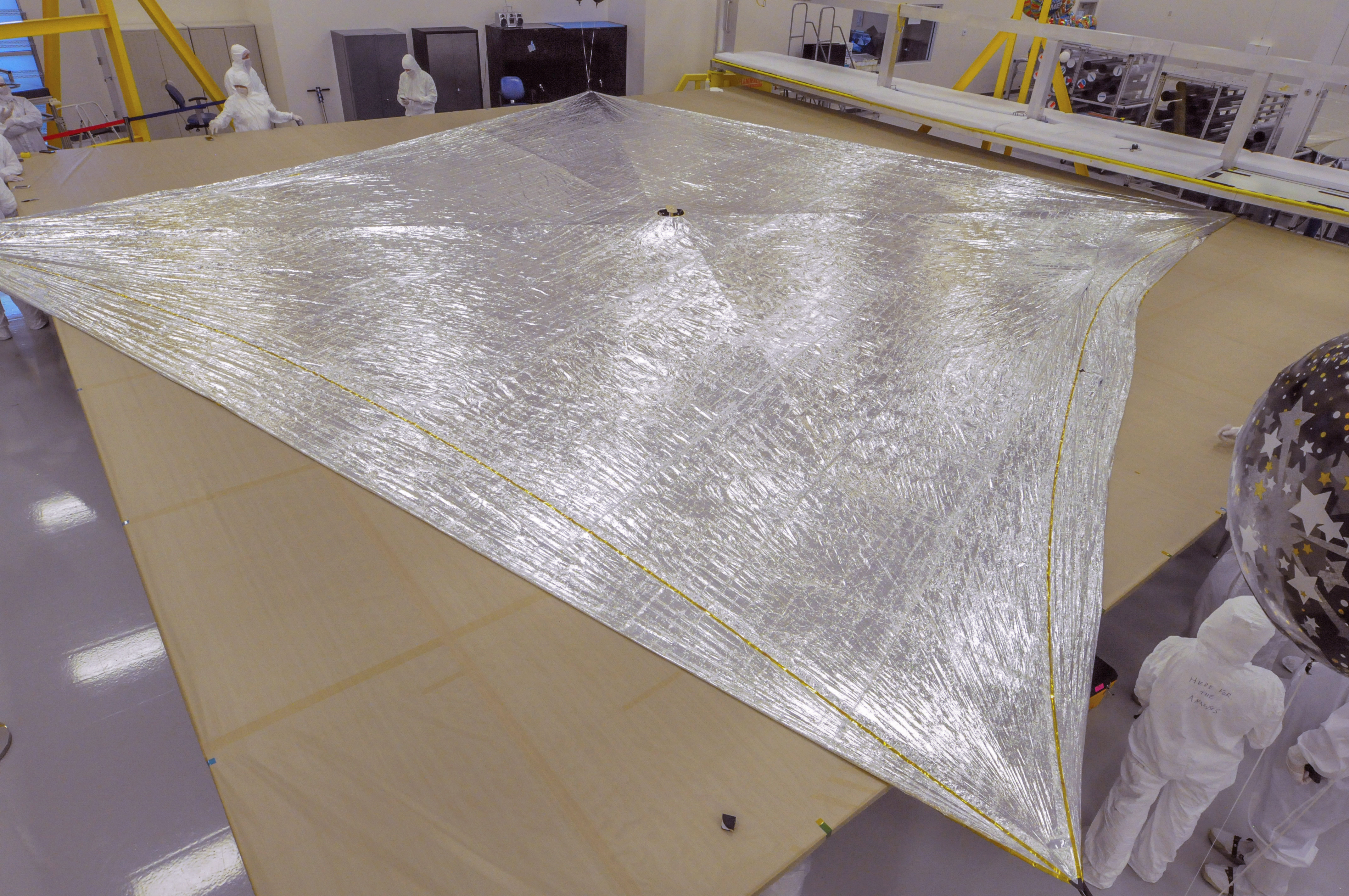 When fully deployed, NEA Scout’s solar sail is the length of a school bus. This sail is used to reflect sunlight to use as propulsion for the satellite as it moves through space, minimizing the need for fuel and paving the way for deep-space exploration missions. Image: NASA/MSFC/Emmett Given

“Last year, we did a deployment test on a half-scale prototype of the solar sail. We used the findings to make several improvements to the spacecraft’s sail deployment mechanism,” says Tiffany Lockett, a NEA Scout sail systems engineer at NASA’s Marshall Space Flight Center. “We incorporated a larger motor to help retract the booms after deployment and upgraded the software to perform the test. Also, we improved the sail restraint tab that holds the sail in place prior to deployment for easier sail deployment, upgraded the connection between the sail and the booms, and included a pin puller to help lock the sail spool during transportation.”

To minimize the amount of human intervention needed to deploy the sail in a gravity environment, the team had to come up with a way to reduce friction where possible. Engineers used improved sliders to allow the booms to glide easily across the surface of the table with less friction.

“We learned a lot from the results of today’s test. The motor performed as anticipated and three of the four sail restraint tabs released on time. The new improved booms operated much better under less friction,” says Alex Few, NEA Scout sail systems mechanical designer at Marshall. “We look forward to analyzing the results further in the coming weeks.” 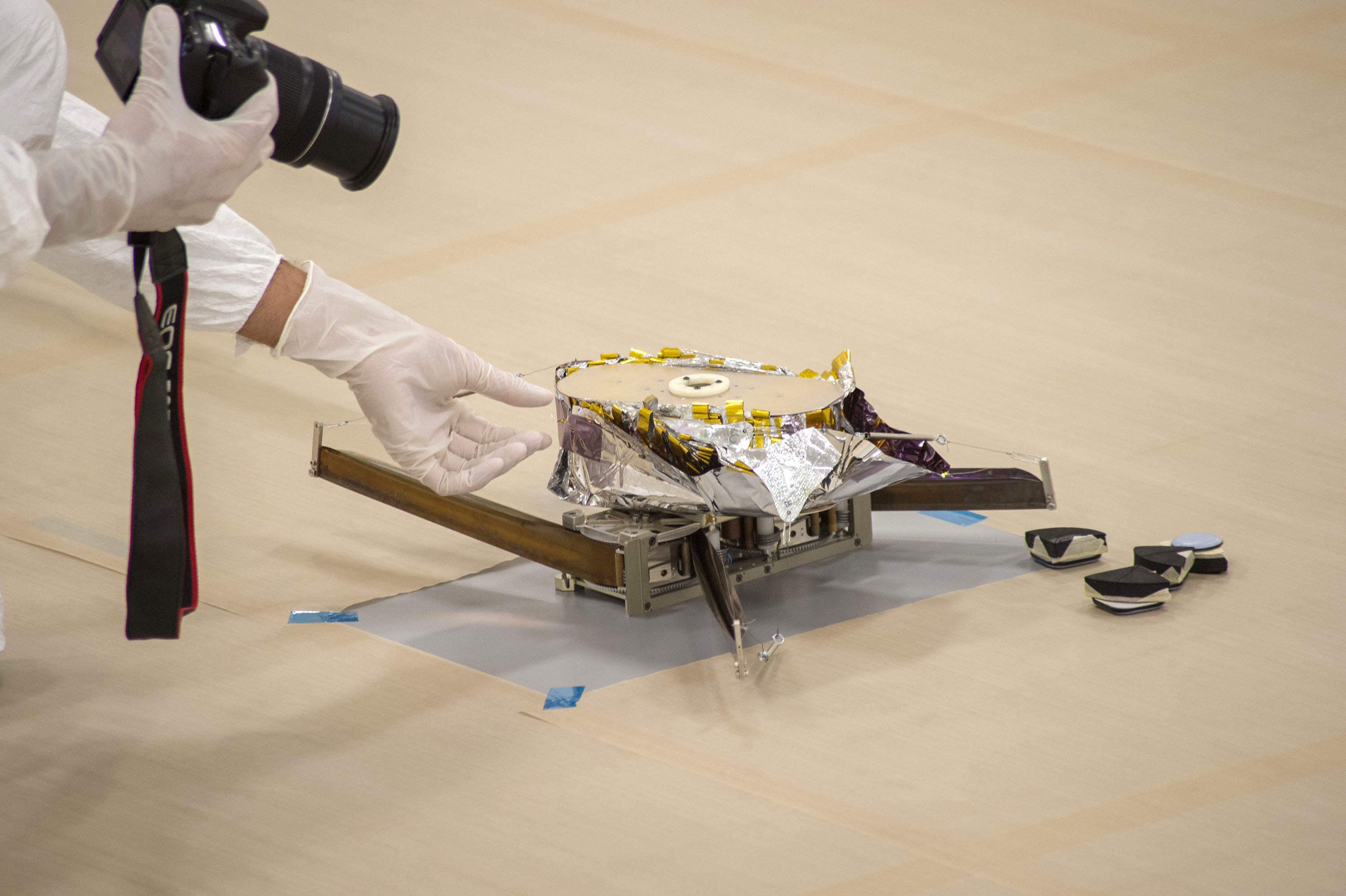 The team will use these findings to make final adjustments to the testing of the solar sail that will be used in flight, scheduled for testing later this year.

“NEA Scout will perform a reconnaissance fly-by and take pictures of an asteroid to learn more about the risks and challenges they may pose to future human exploration missions,” says Les Johnson, NEA Scout’s solar sail principal investigator at Marshall. “It will deploy from the rocket after the Orion spacecraft is separated from the upper stage.”