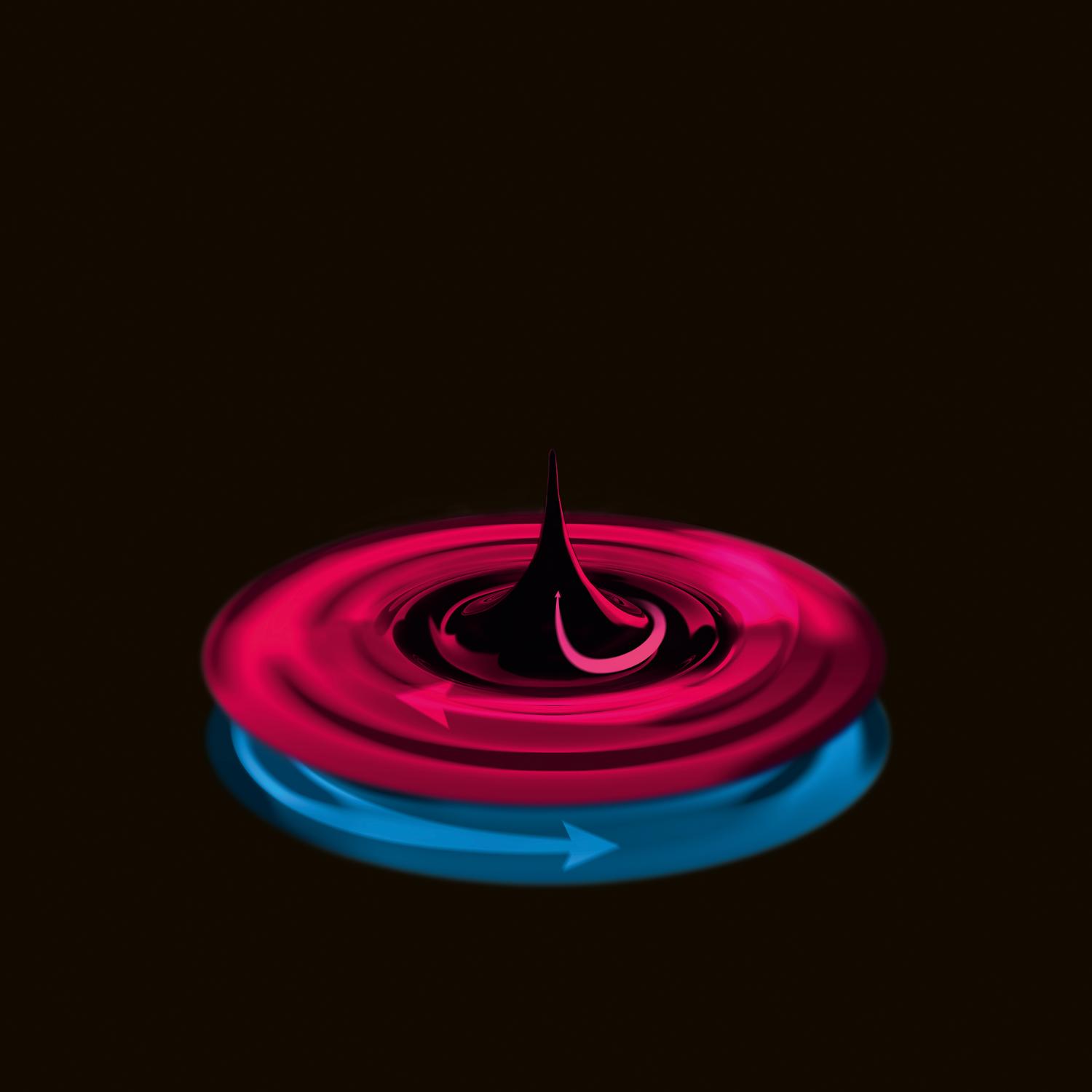 The center of a magnetic vortex emits spin waves with very short wavelengths in the presence of high-frequency alternating magnetic fields. Scientists at the Helmholtz-Zentrum Dresden-Rossendorf have hereby provided proof of a mechanism which has great potential for future applications in data processing. (Credit: HZDR)

With the rapid advance of miniaturization, data processing using electric currents faces tough challenges, some of which are insurmountable. Magnetic spin waves are a promising alternative for the transfer of information in even more compact chips. Scientists at the Helmholtz-Zentrum Dresden-Rossendorf (HZDR), as part of an international research venture, have now succeeded in generating spin waves with extremely short wavelengths in the nanometer range – a key feature for their future application.

Smaller, faster, more energy-efficient – this is the mantra for the further development of computers and mobile telephones which is currently progressing at a breathtaking pace. However, Dr. Sebastian Wintz of the HZDR Institute of Ion Beam Physics and Materials Research knows only too well, how difficult it already is to achieve any further degree of miniaturization. “One major problem with current technologies,” he said, “is the heat which is generated when data are transmitted with the aid of electric currents. We need a new concept.” The physicist is working with international colleagues on so-called spin waves (magnons) which are set to replace moving charges in the future as information carriers. The scientists have now succeeded for the first time in generating spin waves of such short wavelengths that they have potential for future applications in data processing.

The spin denotes a property which lends the particles a magnetic moment. They then act like tiny magnets which run parallel to each other in ferromagnetic materials. If one of the spins then changes direction, this has a knock-on effect on its neighbors. A chain reaction gives rise to a spin wave.

The processing of information is presently based on electric currents. The charged particles speed through a network of wires which are squeezed closer and closer together, driven by the desire for ever more compact chips. On their way, the electrons collide with atoms, causing them to rock to and fro in the crystal lattice thereby generating heat. If the wires are too close together, this heat can no longer be dissipated and the system breaks down. “The great advantage of spin waves is that the electrons themselves don’t move,” explained Wintz, “therefore precious little heat is produced by the flow of data.”

Magnetic vortex as a nano-antenna

The traditional approach adopted to generate spin waves is to use small metal antennas which generate magnons when driven by a high-frequency alternating current. The smallest wavelength which can be generated in this way will be about the size of the antenna which is used. This is precisely where the major problem lies in that small wavelengths on the nanometer scale are required in order to satisfy the demand for ever greater miniaturization. It is not currently possible, however, to make such small high-frequency antennas.

The research team from Germany, Switzerland and the USA has now succeeded in generating extremely short-wavelength spin waves in an entirely new way. As a naturally formed antenna, they use the center of a magnetic vortex which is produced in a small, ultra-thin ferromagnetic disk. Due to the disk’s limited size, the spins do not all line up in parallel as normal but lie along concentric circles in the plane of the disk. This, in turn, forces the spins from a small area in the center of the disk, which measures just a few nanometers in diameter, to straighten up and, thus, to point away from the surface of the disk. If this central region is subjected to an alternating magnetic field then a spin wave is produced.

A few more tricks are needed, however, in order to shorten the wavelength as required. Consequently, a second tiny disk is placed onto the first, separated by a thin, non-magnetic layer. When this separating layer is fabricated with a specific thickness, then the two disks interact in such a way as to elicit an antiferromagnetic coupling between the disks – the spins try to point in opposite directions – which reduces the wavelength of the emitted spin waves many times over. “Only in this way do we arrive at a result which is relevant for information technology,” added Wintz.

The scientists not only demonstrated the short wavelengths of the spin waves generated in this way but were also able to reveal other wave properties which could be very useful for future applications. With the help of high-speed movies taken with an X-ray microscope belonging to the Max Planck Institute for Intelligent Systems in Stuttgart (which is installed at the Helmholtz-Zentrum Berlin) they showed that the wavelength can be adjusted precisely by the selection of the excitation frequency. Similar measurements were also carried out at the Paul Scherrer Institute in Switzerland. The results are consistent with a theoretical model which was developed specifically for this study at Oakland University in the USA. What is more, a remarkable phenomenon was predicted, which so far has not been seen directly in the experiments: The speed at which the spin waves travel was calculated to be heavily dependent on their propagation direction (forwards or backwards) – another point which could enable a large number of applications in signal processing.