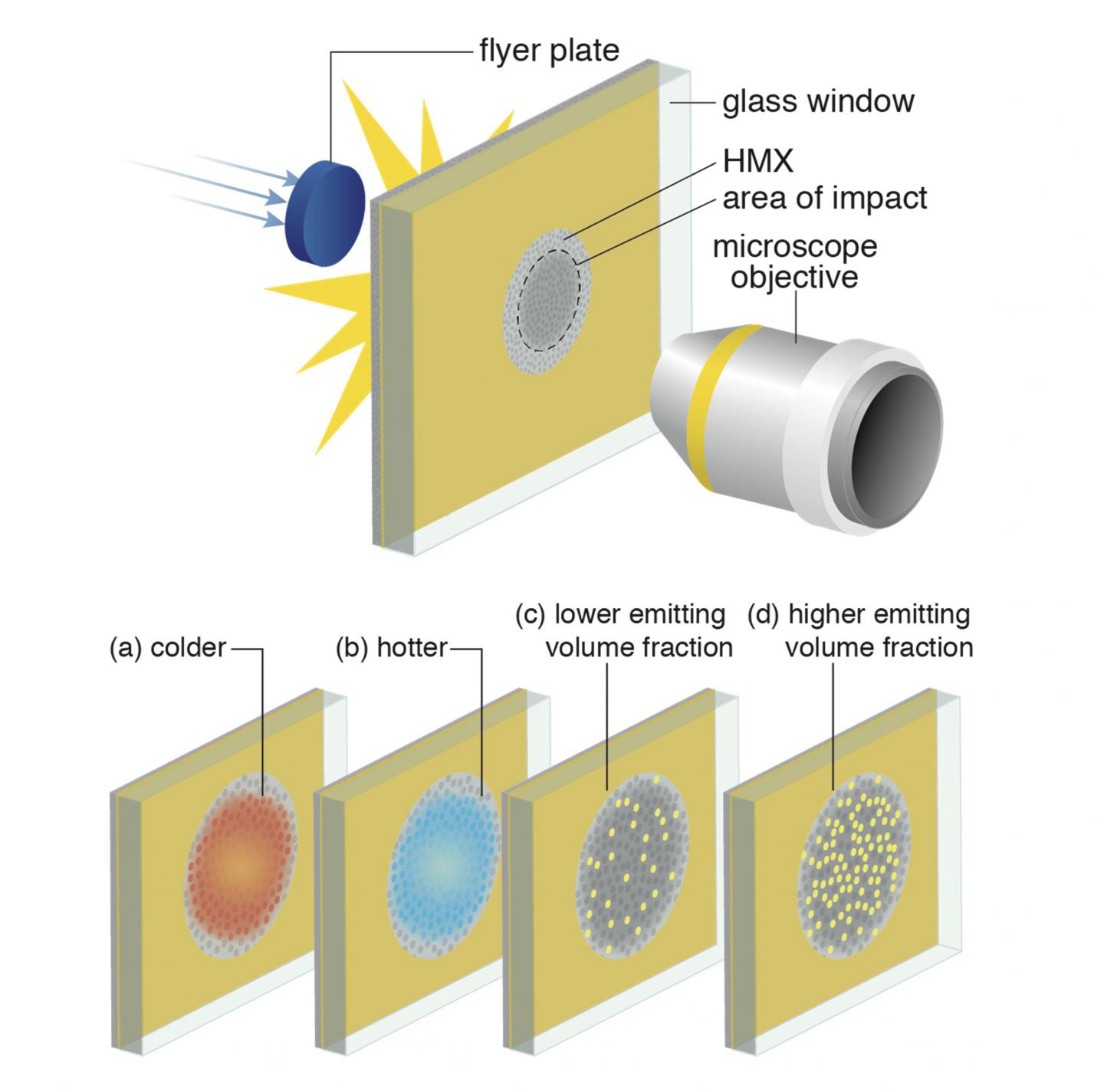 Novel small-scale device on a benchtop has highly sophisticated optical diagnostics enabling investigators to see what is happening during the millionth of a second the charge is exploding, with unprecedented accuracy. Source: Bassett/Dlott

Testing explosions is epic science. The most detailed studies of explosive charges have been conducted at national laboratories using a gun as big as a room to fire a flat bullet — the flyer plate, typically 100 millimeters in diameter — into an explosive charge inside a thick-walled chamber that contains the fierce blast. The tests require enormous facilities.

Though cumbersome, the flat plate impact is the only way to precisely recreate the conditions inside a detonating explosive — and now researchers at the University of Illinois at Urbana-Champaign have recreated this in miniature on a tabletop. In the process, they have made important new contributions to the field of energetic materials by precisely recreating conditions inside a bomb and achieving new levels of accuracy in measuring them.

Their results inform a topic known as the hot spot model of explosive initiation by revealing the dynamics of hot spot growth. That’s important because their long-term goal with improved testing is to make safer explosives — and eliminating hot spots is one way to do that. Their report appears this week in the journal Applied Physics Letters, from AIP Publishing.

Dana D. Dlott, at the University of Illinois at Urbana-Champaign’s School of Chemical Sciences and Frederick Seitz Materials Research Laboratory, explains the team’s work this way: “Because we can do this so many times a day with a small-scale device on a benchtop that has highly sophisticated optical diagnostics, we see what is happening during the millionth of a second the charge is exploding, with unprecedented accuracy.”

He emphasized that their approach does not replace the conventional test methods. Rather, their instrument and small-scale tests contribute to understanding how bombs really behave.

“Our apparatus allows us to look at the fundamental mechanisms of the initial events never before seen,” he said.

“This is an important verification of the hot spot model of explosive initiation, and also, it’s important because we measured time scales and rates never before seen,” added Will P. Bassett a graduate student and member of the research team. Much has been written about hot spots, but they are not often observed and the detailed dynamics of hot spot growth have not been explored before this study.

Hot spots are a hot topic in bomb research because they play a crucial role in the phase cycle of explosions, and in controlling explosions and their aftereffects.

“Depending on the impact duration, the growth spurts could be as fast as 300 nanoseconds and as slow as 13 microseconds,” Bassett said.

Their experiments use a pulsed laser to launch a tiny flat bullet 0.5 millimeter in diameter at speeds up to 12 times the speed of sound. This flyer plate impacts an explosive charge that is less than one millionth the size — it could fit inside an adult’s hand — yet capable of producing precisely the same conditions as in a detonating explosive.

The current work builds on the team’s previous research into the complex chemical kinetics of bomb behavior. In it the team observed that the powdered form of a standard test explosive known as HMX material — a common prototypical test material and most powerful explosive in general use — explodes in two phases. First, there is an immediate, prompt explosion at impact. Second, a delayed explosion occurs 300 nanoseconds later — one nanosecond is one-billionth of a second. This new paper extends the work to reveal that initially a small part of the explosive started to react and this spatially limited reaction spread throughout the HMX.

For next steps, the team will continue to validate its instrument and apply test results to improving safety outcomes of explosion science.