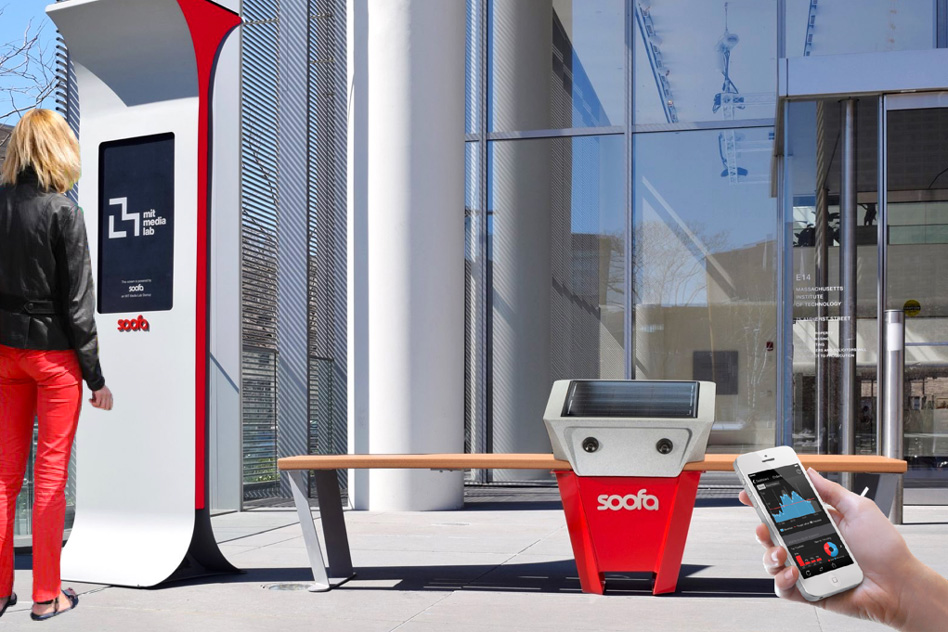 MIT Media Lab spinout Changing Environments is the brains behind the solar-powered Soofa Bench, which is equipped with an embedded charging station for mobile devices that also connects to wireless networks. Recently, the startup released the solar-powered Soofa Sign, which displays public transit times, weather, and events, among other city information. Courtesy of Changing Environments

Equipped with high-tech versions of common city fixtures — namely, smart benches and digital information signs — and fueled by a “deploy or die” attitude, MIT Media Lab spinout Changing Environments is hoping to accelerate the development of “smart” cities that use technology to solve urban challenges.

“The idea is to bring simple technologies to the streets,” says CEO Sandra Richter, a former Media Lab researcher who co-founded the startup with Nan Zhao, a Media Lab PhD student, and Jutta Friedrichs, a Harvard University graduate. “When it comes to smart cities, there’s been a lot of talking, but not a lot of doing. If you don’t want this [smart city] concept to die, you need to bring real-world examples to the places where we live, work, and play.”

The women-founded startup is the brains behind the Soofa Benches that have cropped up around Boston and Cambridge, including on MIT’s campus. The benches contain an embedded charging station powered by a mini solar panel, with two USB ports for plugging in mobile devices. They also connect to wireless networks.

First installed in Boston in June 2014, the benches are now in 65 cities across 23 U.S. states, including in New York; Washington; Los Angeles; Boulder, Colorado; Oklahoma City; and Austin, Texas. Cities in Canada, Costa Rica, Saudi Arabia, and Germany have adopted the benches as well. The startup also sells a Soofa charging station independently, which can be integrated into existing city infrastructure.

Recently, Changing Environments starting deploying its second solar-powered product, the Soofa Sign, in Metro Boston spots including in Kendall Square in Cambridge, Samuel Adams Park in Boston, and Porter Square in Cambridge and Somerville. Each sign has apps installed that display public transit times, weather, and events, among other information. This month, the startup will select three additional cities where it will pilot the Soofa Sign.

Each Soofa product comes equipped with sensors that gather pedestrian-traffic data for cities, and can be considered part of the “internet of things” (IoT), in which many kinds of everyday devices are wirelessly connected and exchange data. This data can be used by cities to make decisions about funding city developments, events, and other initiatives that impact the public.

Richter and Zhao came together in the Media Lab after realizing they shared similar interests in developing “persuasive” technologies that helped people live healthier and more sustainably.

Richter studied in the Changing Places group led by Principal Research Scientist Kent Larson, where she designed technologies and apps that encouraged people to bike more, use electric cars, and maintain other healthy practices. (Richter was named one of the most creative people in business by Fast Company in 2013 for her work at the lab.) Zhao, a student in the Responsive Environments group led by Joseph Paradiso, the Alexander W. Dreyfoos Professor in Media Arts and Sciences, develops technologies that help people save energy by using less light. The startup’s name, in fact, is a combination of the two group names.

Many of Richter and Zhao’s projects centered on building for smart cities, in which IoT devices would collect data to help improve efficiency of services and meet residents’ needs. As a side project, in 2013, they decided to build an IoT fixture that could be easily deployed in urban areas and would benefit the public.

“And what is better than a park bench?” Richter says. “It’s something we have all around the globe, has existed for centuries, and is a place for people to connect with each other. For us, that was the ideal platform to start introducing sensors into the public environment.”

From there, things moved quickly. Influenced by the Media Lab’s oft-repeated motto, “deploy or die,” Richter and Zhao, then joined by Friedrichs, developed a concrete prototype of the current Soofa Bench model, “every now and then turning the Media Lab into a concrete mess,” Richter says, laughing.

Thanks to a meeting facilitated by Larson with Boston’s Mayor’s Office of New Urban Mechanics, the first Soofa Bench prototype was installed in Titus Sparrow Park in June 2014. One week after, Richter took the prototype to the first White House Maker’s Faire, where she sat down with then-President Barack Obama to discuss the bench and the future of smart cities.

Upon returning to Boston, the three co-founders embarked on a “crazy summer where everything happened,” Zhao says.

Verizon and Cisco — which invests in IoT technologies — had funded the students to develop more Soofa Benches. But the students didn’t even have a company bank account. “So literally a couple days before Cisco transferred money, we said, ‘Alright, we need to start a company,’” Richter says.

Naming themselves Changing Environments, the students cranked out about 10 benches in the Media Lab as part of a pilot launch for spots in the Boston Common, the Rose Kennedy Greenway, and other Boston locations. In mid-2015, Changing Environments opened headquarters in East Cambridge and brought its first commercial Soofa Bench to Central Square, in Cambridge, before spreading to dozens of other U.S. and international cities.

An icon for IoT

Today, the Soofa Benches are certainly seeing use. Charging activity is tracked at headquarters where, in a lighthearted competition, the office has a “bench leadership board” with benches that see the most charging activity. Currently holding the top spot is “Amelia,” the startup’s first commercial bench in Cambridge’s Central Square, with 1,817 total hours charged over a total of 3,571 charging sessions, as of mid-January. (Soofa encourages cities to name each bench to keep things amusing and engaging.)

Benches in Harvard Square and on the Rose Kennedy Greenway have logged around 2,500 charging sessions. Some newly installed benches in New York City, which were just implemented in May 2016, already have more than 2,000 sessions charged.

On the back end, Soofa fixtures collect valuable data for the city governments that purchase them. The sensors count the wireless signals emitted from pedestrians’ mobile devices and assign an activity level for the location. Cities can use Soofa software to check if activity was high or low in certain areas at certain times. A city may note, for instance, that a certain event drew a big crowd and may decide to host similar events.

More broadly, Richter says, installing Soofa Benches — often a publicized event — can open discussions about smart cities. When benches are installed in a new city, the mayor or other city official usually meets the co-founders at the bench to discuss the technology and its benefits and limitations. In that way, Soofa serves as “an icon for internet of things in cities,” Richter says.

Now a thriving startup, Changing Environments owes some of its success to MIT’s entrepreneurial ecosystem, the co-founders say, including an early investment from the Media Lab’s E14 Fund, which provides stipends, mentoring, introductions to investors, and basic legal and accounting services to recent MIT graduates such as Richter.

The E14 Fund, Richter says, gave her a great “runway” for transitioning from student to entrepreneur. “It’s like you’re still under the wing of the lab, but you’re just learning how to fly,” she says.

The newly deployed Soofa Sign, Richter adds, came about through a collaboration with MIT spinout E Ink — which invented electronic ink for e-readers and other devices — that was initiated by Joi Ito, director of the Media Lab. “It’s beautiful to see two MIT companies working together to push the envelope on a product,” Richter says.

This winter, MIT professors also helped the startup recruit interns for the Institute’s Independent Activities Period. And mentors still offer advice when needed. “It’s been great to continue the relationship with professors, students, and the MIT community as a whole,” Richter says.