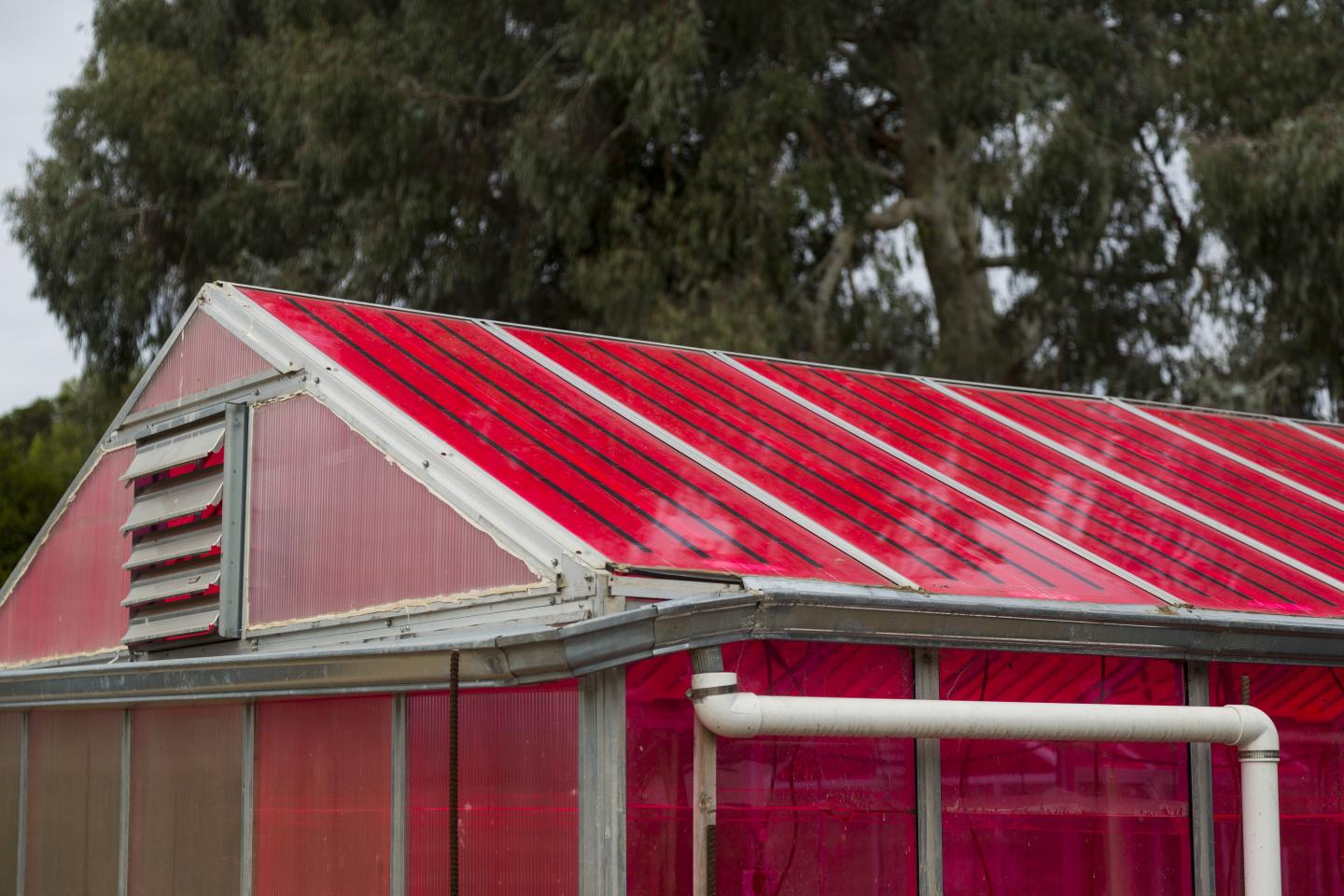 The first crops of tomatoes and cucumbers grown inside electricity-generating solar greenhouses were as healthy as those raised in conventional greenhouses, signaling that “smart” greenhouses hold great promise for dual-use farming and renewable electricity production.

“We have demonstrated that ‘smart greenhouses’ can capture solar energy for electricity without reducing plant growth, which is pretty exciting,” said Michael Loik, professor of environmental studies at the University of California, Santa Cruz, and lead author on a paper that appears in the current issue of the American Geophysical Union’s journal Earth’s Future.

Electricity-generating solar greenhouses utilize Wavelength-Selective Photovoltaic Systems (WSPVs), a novel technology that generates electricity more efficiently and at less cost than traditional photovoltaic systems. These greenhouses are outfitted with transparent roof panels embedded with a bright magenta luminescent dye that absorbs light and transfers energy to narrow photovoltaic strips, where electricity is produced. WSPVs absorb some of the blue and green wavelengths of light but let the rest through, allowing the plants to grow. WSPV technology was developed by coauthors Sue Carter and Glenn Alers, both professors of physics at UC Santa Cruz, who founded Soliculture in 2012 to bring the technology to market.

Loik’s team monitored photosynthesis and fruit production across 20 varieties of tomatoes, cucumbers, lemons, limes, peppers, strawberries, and basil grown in magenta glasshouses at two locations on campus and one in Watsonville, California.

“Eighty percent of the plants weren’t affected, while 20 percent actually grew better under the magenta windows,” said Loik. Tomatoes and cucumbers are among the top greenhouse-produced crops worldwide, he said.

In additional experiments, small water savings were associated with tomato photosynthesis inside the magenta glasshouses. “Plants required 5 percent less water to grow the same amount as in more conventional glasshouses,” he said.

“I thought the plants would grow more slowly, because it’s darker under these pink panels. The color of the light makes it like being on the Red Planet,” said Loik. “Plants are sensitive not just to the intensity of light but also to color. But it turns out the plants grow just as well.”

Reducing the energy consumed by greenhouses has become a priority as the global use of greenhouses for food production has increased six-fold over the past 20 years to more than 9 million acres today–roughly twice the size of New Jersey, according to Loik. “It’s big and getting bigger,” he said. “Canada relies heavily on greenhouses for vegetable production, and their use is growing in China, too.” Plastic greenhouses are becoming popular for small-scale commercial farming, as well as for household food production, he added.

Greenhouses use electricity to control temperature and power fans, lights, and other monitoring systems. “This technology has the potential to take greenhouses offline,” said Loik, who specializes in climate change, plant physiology, water resources, and sustainable technologies. Cost per panel of WSPV technology is 65 cents per watt–about 40 percent less than the per-watt cost of traditional silicon-based photovoltaic cells.

“If greenhouses generate electricity on site, that reduces the need for an outside source, which helps lower greenhouse gas emissions even more,” said Loik. “We’re moving toward self-sustaining greenhouses.”