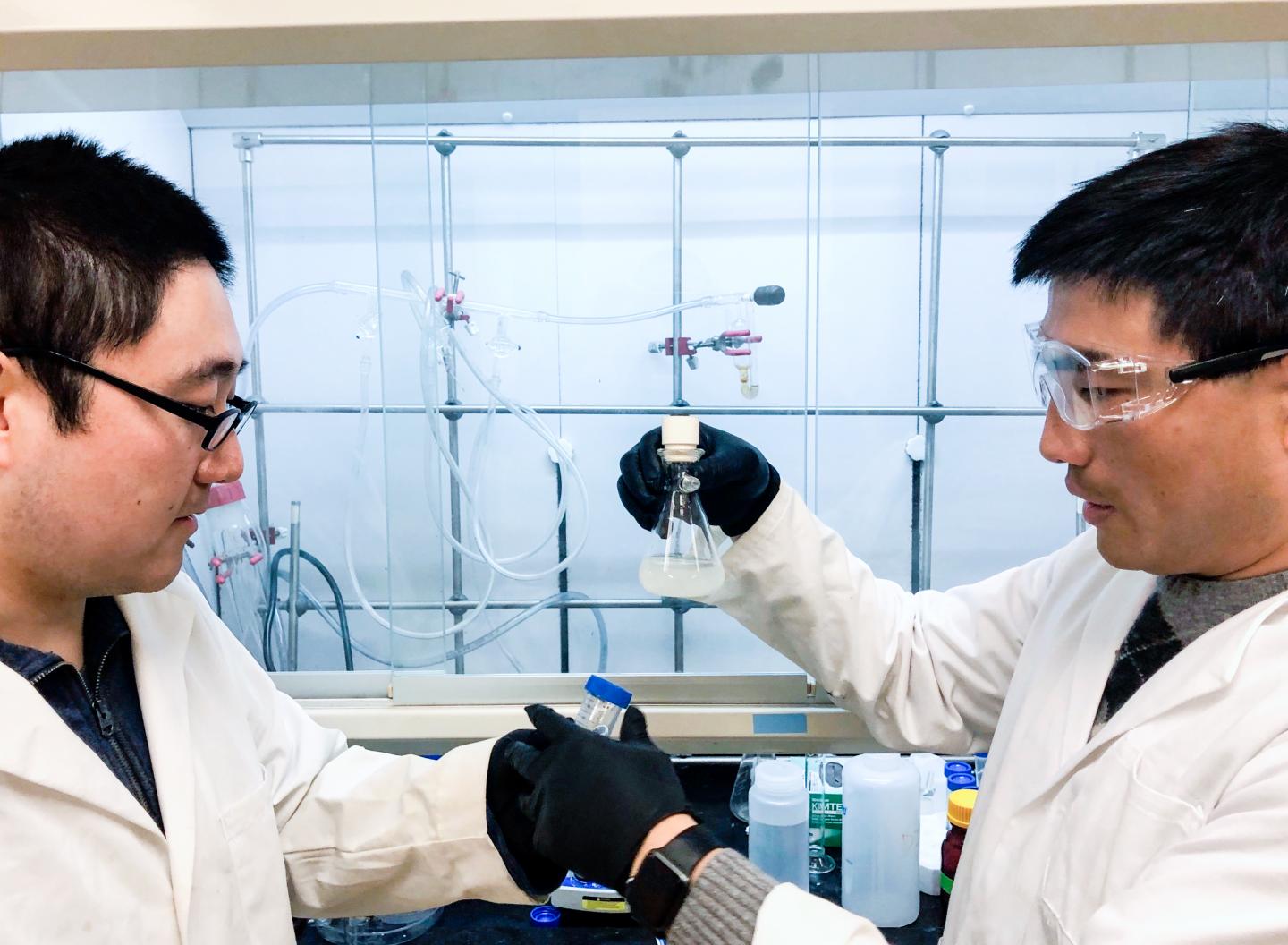 Fei Zhao (L), co author of the study, and Guihua Yu (R) of Yu Research Labs at UT Austin examining a sample of their newly-developed hydrogel. Credit: Cockrell School of Engineering, The University of Texas at Austin.

Access to clean water remains one of the biggest challenges facing humankind. A breakthrough by engineers at The University of Texas at Austin may offer a new solution through solar-powered technology that absorbs moisture from the air and returns it as clean, usable water.

The breakthrough, described in a recent issue of the journal Advanced Materials, could be used in disaster situations, water crises or poverty-stricken areas and developing countries. The technology relies on hydrogels, gel-polymer hybrid materials designed to be "super sponges" that can retain large amounts of water.

A research team led by Guihua Yu in UT Austin's Cockrell School of Engineering combined hydrogels that are both highly water absorbent and can release water upon heating. This unique combination has been successfully proved to work in humid and dry weather conditions and is crucial to enabling the production of clean, safe drinking water from the air.

With an estimated 50,000 cubic kilometers of water contained in the atmosphere, this new system could tap into those reserves and potentially lead to small, inexpensive and portable filtration systems.

"We have developed a completely passive system where all you need to do is leave the hydrogel outside and it will collect water," said Fei Zhao, a postdoctoral researcher on Yu's team and co-author of the study. "The collected water will remain stored in the hydrogel until you expose it to sunlight. After about five minutes under natural sunlight, the water releases."

This technology builds upon a 2018 breakthrough made by Yu and Zhao in which they developed a solar-powered water purification innovation using hydrogels that cleans water from any source using only solar energy. The team's new innovation takes that work a step further by using the water that already exists in the atmosphere. For both hydrogel-based technologies, Yu and his research team developed a way to combine materials that possess both hygroscopic (water-absorbing) qualities and thermal-responsive hydrophilicity (the ability to release water upon simple heating).

"The new material is designed to both harvest moisture from the air and produce clean water under sunlight, avoiding intensive energy consumption," said Yu, an associate professor of materials science and mechanical engineering.

Harvesting water from moisture is not exactly a new concept. Most refrigerators keep things cool through a vapor condensation process. However, the common fridge requires lots of energy to perform that action. The UT team's technology requires only solar power, is compact and can still produce enough water to meet the daily needs of an average household. Prototype tests showed daily water production of up to 50 liters per kilogram of hydrogel.

Yu and his team have filed a patent, and Yu is working with UT's Office of Technology Commercialization on the licensing and commercialization of this innovative class of hydrogels. The research was funded by the Alfred P. Sloan Foundation, the Camille & Henry Dreyfus Foundation and the National Science Foundation.