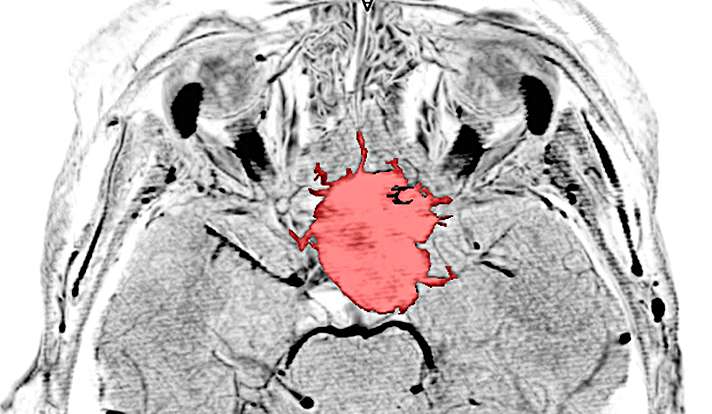 In solving one mystery—the genetic roots of benign brain tumors called meningiomas—a team of scientists led by Yale researchers stumbled upon an even greater one: How is it possible that two of the mutations linked to meningiomas occur in a gene crucial to all life?

In the study, which is published online on Aug. 22 in Nature Genetics, a team led by Yale’s Murat Gunel searched the genetic landscape of meningiomas and found two mutations in a gene essential for transcribing messenger RNA from DNA, transferring all the genetic information to synthesize proteins. So essential for survival is RNA polymerase II that it is has remained unchanged during the evolution of most animal species. Such mutations in developing embryo would be fatal.

“We were very surprised that these mutations, basically without any other genomic alterations, were sufficient to hijack this essential molecule to drive the formation of these benign tumors,” said Gunel, professor and chairman of neurosurgery and professor of genetics and of neuroscience at Yale. “The finding challenges our understanding of a very fundamental, basic biological process.”

In addition, Gunel and colleagues found novel mutations in four other genes linked to the development of meningiomas. “The findings not only contribute to our basic scientific understanding of how meningiomas form, but also makes personalized, precision therapy of recurrent and difficult to treat meningiomas a reality,” Gunel said.