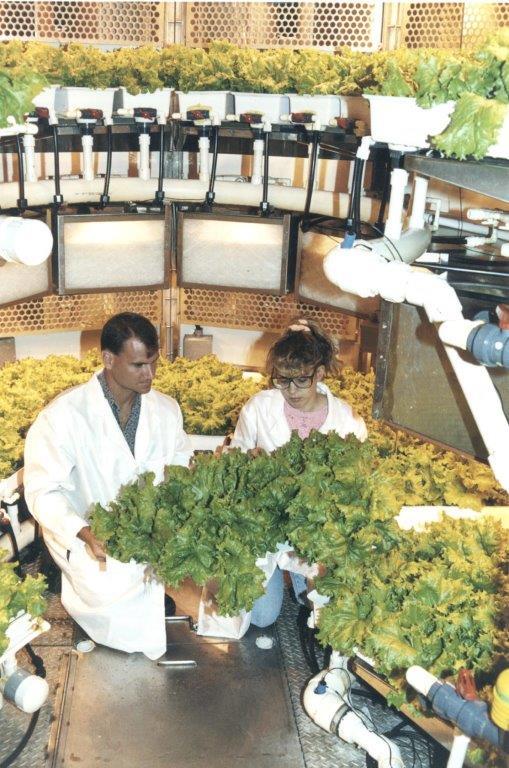 Research into space farming has resulted in numerous Earth-based advances (e.g., LED lighting for greenhouse and vertical farm applications; new seed potato propagation techniques, etc.) There are still many technical challenges, but plants and associated biological systems can and will be a major component of the systems that keep humans alive when we establish ourselves on the Moon, Mars and beyond. Credit: NASA

Following a new NASA bill, passed in March by the US Congress and which authorizes $19.5 billion spending for space exploration in 2017, manned missions to Mars are closer to reality than ever before.

As both public and private enterprises gear up towards a return to the Moon and the first human footsteps on the Red Planet, there is a renewed focus on keeping people alive and productive in these extreme environments. Plants, and specifically crop plants, will be a major component of proposed regenerative life-support systems as they provide food, oxygen, scrub carbon dioxide, and aid in water recycling – all in a self-regenerating or ‘bioregenerative’ fashion. Without a doubt, plants are a requirement for any sufficiently long duration (time and distance wise) human space exploration mission. There has been a great deal of research in this area – research that has not only advanced Agriculture in Space, but has resulted in a great many Earth-based advances as well (e.g., LED lighting for greenhouse and vertical farm applications; new seed potato propagation techniques, etc.)

A recent article by Dr. Raymond M. Wheeler from the NASA Kennedy Space Center, now available in open access in the journal Open Agriculture, provides an informative and comprehensive account of the various international historical and current contributions to bioregenerative life-support and the use of controlled environment agriculture for human space exploration. Covering most of the major developments of international teams, it relates some of this work to technology transfer which proves valuable here on Earth.

The idea of using plants to keep people alive and productive in space is not new, both in concept and in scientific inquiry. The article covers a large portion of the historical international research effort that will be the foundation for many of the trade studies and mission design plans for use of artificial ecosystems in space.

Research in the area started in 1950s and 60s through the works of Jack Myers and others, who studied algae for oxygen production and carbon dioxide removal for the US Air Force and the National Aeronautics and Space Administration (NASA). Studies on algal production and controlled environment agriculture were also carried out by Russian researchers in Krasnoyarsk, Siberia beginning in the 1960s including tests with human crews whose air, water, and much of their food were provided by wheat and other crops. NASA initiated its Controlled Ecological Life Support System (CELSS) Program in the early 1980s with testing focused on controlled environment production of wheat, soybean, potato, lettuce, and sweet potato. Findings from these studies paved the way to conduct tests in a 20 m2, atmospherically closed chamber located at Kennedy Space Center.

At about the same time, Japanese researchers developed a Closed Ecology Experiment Facilities (CEEF) in Aomori Prefecture to conduct closed system studies with plants, humans, animals, and waste recycling systems. CEEF had 150 m2 of plant growth area, which provided a near-complete diet along with air and water regeneration for two humans and two goats.

The European Space Agency MELiSSA Project began in the late 1980s and pursued ecological approaches for providing gas, water and materials recycling for space life support, and later expanded to include plant testing.

A Canadian research team at the University of Guelph started a research facility for space crop research in 1994. Only a few years later, they went on to develop sophisticated canopy-scale hypobaric plant production chambers for testing crops for space, and have since expanded their testing for a wide range of controlled environment agriculture topics.

Most recently, a group at Beihang University in Beijing designed, built and tested a closed life support facility (Lunar Palace 1), which included a 69 m2 agricultural module for air, water, and food production for three humans.

As a result of these international studies in space agriculture, novel technologies and findings have been produced; this includes the first use of light emitting diodes for growing crops, one of the first demonstrations of vertical agriculture, use of hydroponic approaches for subterranean crops like potato and sweet potato, crop yields that surpassed reported record field yields, the ability to quantify volatile organic compound production (e.g., ethylene) from whole crop stands, innovative approaches for controlling water delivery, approaches for processing and recycling wastes back to crop production systems, and more. The theme of agriculture for space has contributed to, and benefited from terrestrial, controlled environment agriculture and will continue to do so into the future. There are still numerous technical challenges, but plants and associated biological systems can and will be a major component of the systems that keep humans alive when we establish ourselves on the Moon, Mars and beyond.

“Dr. Ray Wheeler has written a compelling and complete history of the people that have committed their careers to enabling the colonization of space. Drawing upon his deep understanding of the programs developed, people involved, and progress achieved to highlight the accomplishments and contributions of scientist and engineers around the world to bring the vision of space exploration to fruition, he details the problems, challenges, results and contributions from the programs, and reveals how they benefited Earth, as well as space. The review underscores that the answers will be achieved not through proclamation, but through collaboration between nations, cooperation between people, and sustained commitment by institutions. His article should be required reading for anyone with even a passing interest in the Space Agriculture.”