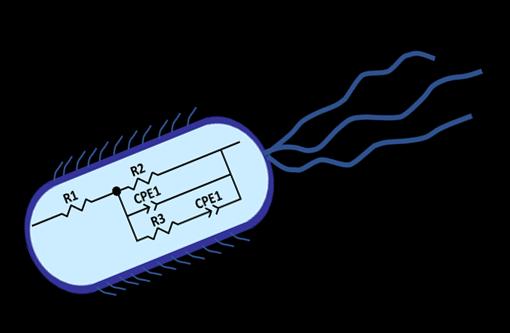 Electrochemical techniques are being used to define microorganisms as electrochemical entities and thereby provide opportunities to monitor microbial activity in real time, in-situ. This approach is expected to decrease analytical costs while providing an abundance of data for industrial bioprocesses. Credit: Savannah River National Laboratory

Savannah River National Laboratory, in collaboration with Clemson University, the University of South Carolina and Savannah River Consulting LLC, has demonstrated the use of electrochemical techniques to monitor the growth status and energy levels of microorganisms used in biotechnology industries. As published in a recent Applied Microbiology and Biotechnology Express article, the techniques monitor the microbes in real time, improving the cost-effectiveness of the results compared to conventional sampling and analysis.

Microorganisms are used in many industrial applications, including production of fuels, chemicals, pharmaceuticals, and foods (e.g., ethanol, acetate, biodegradable plastics, penicillin, and yogurt). Like all organisms, microorganisms use food sources such as sugars, proteins, and lipids to obtain organic carbon for growth as well as energy from electrons released during break-down of food sources. A decline in the vigor of a microbial culture could be caused by a diminishing food source, presence of a growth inhibitor, or contamination from another culture. To avoid further decline, any such issue needs to be addressed promptly.

To ensure the microbes are performing optimally, their cell numbers and / or chemical byproducts must be monitored. The conventional approach is to take periodic samples from microbial cultures to analyze the growth status of the cells. Hands-on sampling and analysis are time consuming, labor intensive, and costly, which may allow problems to persist for hours before they are detected. This Savannah River National Lab-led research team has demonstrated a multi-faceted, automated approach to monitor the energy levels of microbes.

One part of the technology provides an alert when cellular energy levels decrease. With electrodes poised at a specific reducing potential, microbes in the culture can pull energy into their cells in the form of electrons from the electrodes held adjacent to the culture. The small portion of the culture that contacts the electrodes serves as an early warning system for sub-optimal conditions. The energy taken into the microbes from the electrodes shows up on a computer screen as an increase in electrical current. Because this electrochemical activity can be monitored as it happens, this technique can be used to maintain the right conditions for optimal microbial behavior.

The other portion of the technology uses electrochemical impedance to monitor the culture throughout the growth cycle. In this way the microbial culture can be defined with an equivalent electrical circuit. The equivalent circuit can then be used to fit impedance data and provide valuable information about the culture that relates to the physiological status of the culture. This approach offers significant potential for decreasing analytical costs as well as automating bioprocesses.