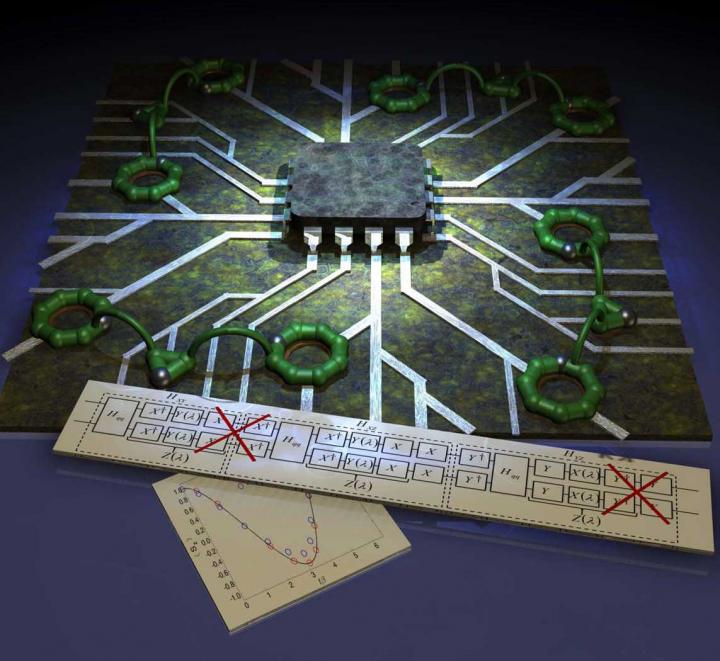 An integrated circuit shows the inclusion of molecular spin qubits for the implementation of entangling quantum gates. Source: Design by Dr. Christopher Muryn

Quantum computing is about to get more complex. Researchers have evidence that large molecules made of nickel and chromium can store and process information in the same way bytes do for digital computers. The researchers present algorithms proving it’s possible to use supramolecular chemistry to connect “qubits,” the basic units for quantum information processing, in Chem on November 10. This approach would generate several kinds of stable qubits that could be connected together into structures called “two-qubit gates.”

“We have shown that the chemistry is achievable for bringing together two-qubit gates,” says senior author Richard Winpenny, Head of the University of Manchester School of Chemistry. “The molecules can be made and the two-qubit gates assembled. The next step is to show that these two-qubit gates work.”

Traditional computers organize and store information in the form of bits, which are written out in long chains of 0s and 1s, whereas quantum computers use qubits, which can be 1, 0, or any superposition between those numbers at the same time, allowing researchers to do much more powerful computations. However, large assemblies of qubits that are stable enough to be applied to perform algorithms don’t yet exist.

Winpenny and his collaborators address this problem in their algorithm designs, which combine large molecules to create both two qubits and a bridge between the units, called a quantum gate. These gates are held together through supramolecular chemistry. Studies of the gates show that the quantum information stored in the individual qubits is stored long enough to allow manipulations of the information and hence algorithms. The time information that can be stored is called the coherence time.

“Say you’re in a bar and you’re trying to bring two pints of beer back to your friends without spilling it. But the bar is filled with drunks who are singing, jumping around, and dancing. The coherence time is a measure of how far you can get the beer without spilling it,” says Winpenny. “You want the bar to be very well behaved and very stationary so you can walk through the pub and get back to the table, just like we want the qubits to be stable long enough so we can store and manipulate information.

“The real problem seems to be whether we could put these qubits together at all. But we showed that connecting these individual qubits doesn’t change the coherence times, so that part of the problem is solvable,” adds Winpenny. “It’s achievable to create multi-qubit gates, and we’re hoping it inspires more scientists to move in that direction.”