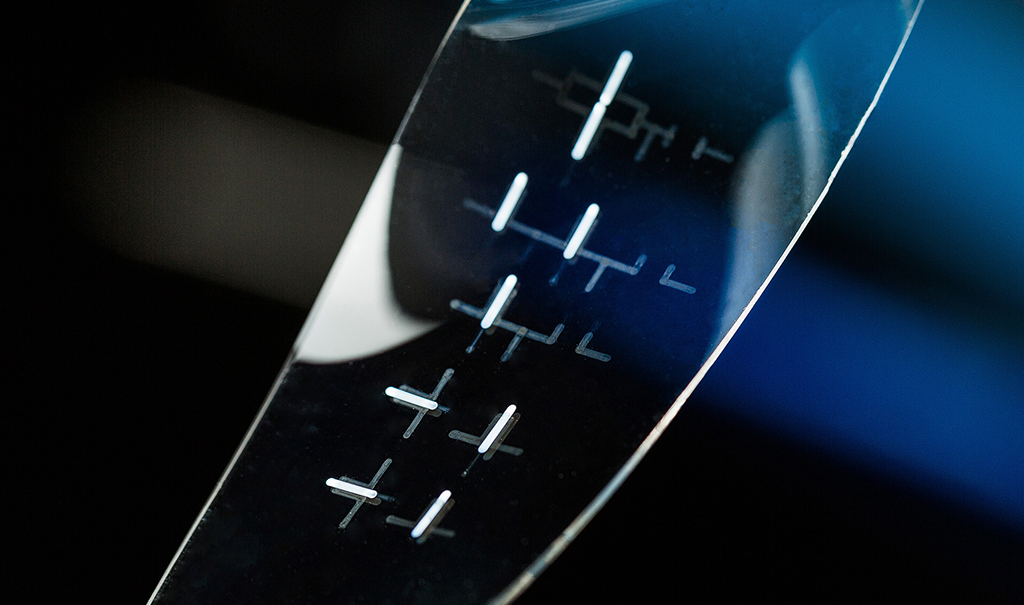 The smart fabric created by MSU engineers could one day lead to an ultra-thin smart tablet that could be manually stretched to a larger size. Credit: Chaun Wang

A stretchable integrated circuit made entirely using an inkjet printer could lead to new advancements for producing smart fabrics.

Engineers at Michigan State University have developed the integrated circuit—the first of its kind—that has elastic-like tendencies that can help mass produce new materials for smart phones and tablets.

Chuan Wang, an assistant professor of electrical and computer engineering at Michigan State, said in an exclusive interview with R&D Magazine that the stretchable material will help make displays for electronic devices.

“The key message is that we can unlock some new elastic electronic material,” he said. “We developed a printing process that can allow us to fabricate an integrated electronic surface that can stretch. We think that will be a good technology to be applied for making stretchable displays.”

The material has a number of applications. It could be used with an ultra-thin smart tablet that can be stretched from a mini-size to extra-large, a rubber band-like wrist monitor that measures heartrates or wallpaper that turns an entire wall into an electronic display.

One of the main advantages of the new material is that it can be produced relatively inexpensively using a standard printer.

Wang compared the cost to the cost of printing a newspaper.

The smart fabric is made up of several materials fabricated from nanomaterials and organic compounds, which are dissolved in solution to produce different electronic inks, and then run through the printer to make the devices.

“Now we are trying to combine these two components together,” said Wang. “Once you have the circuit and the organic light-emitting diode you can combine them to make a pixel and those can be repeated to form a large array and that will be made into a display.”

According to Wang, bendable material currently exists but is not used on the commercial level because it eventually damages the screens on devices.

“It is not practical for consumer applications because those [materials] are just like a piece of paper, so if you crumble a piece of paper it wrinkles all over the place and those wrinkles are irreversible,” Wang said. “[Our] materials can stretch or they can fold and they will never be damaged.”

While the research team isn’t ready to present the material for commercial use yet, Wang said it won’t be long.

“From research and development to a commercial product it is definitely a long way to go,” he said. “In my opinion I think probably in the next one or two years we will able to demonstrate a prototype with a few pixels. A few pixels are far from commercial display but once you can demonstrate the possibility of making a few pixels then it is just a matter of companies taking over the technology and make it on a larger scale.”