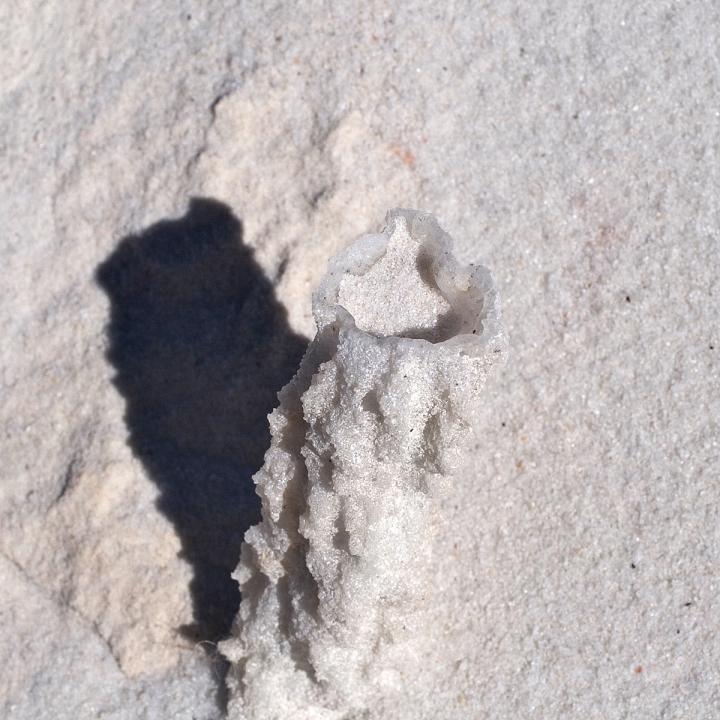 When lightning strikes the sand, it may generate a cylindrical tube of glass, called a fulgurite. This fulgurite has a diameter of approximately 1.2 centimeters. Source: Dr. Matthew Pasek/University of South Florida

Florida, often recognized as the “lightning capital of the United States,” is a great place to study the amount of energy released by a lightning strike. Just ask University of South Florida School of Geosciences Associate Professor Matthew Pasek and his colleague Marc Hurst of Independent Geological Sciences, Inc. who have developed a unique method to measure the amount energy expended by a bolt of cloud-to-ground lightning.

According to Pasek, one of the more difficult things to measure is the amount of energy in a lightning strike. While atmospheric physicists can approximate lightning bolt energy by measuring the electrical current and temperature of bolts as they occur, the numbers are usually approximations.

The team of Pasek and Hurst is the first to investigate the energy in lightning strikes by using geology “after-the-fact” research, rather than measuring energy during a strike. By conducting this lightning strike “archaeology,” the researchers were able to measure the energy in a bolt of lightning that struck Florida sand thousands of years ago.

The results of their analysis were recently published in the journal Scientific Reports.

The team collected more than 250 fulgurites – both recent and ancient – from sand mines in Polk County, Fla., at a site that is believed to have recorded thousands of years of lightning strikes, providing a way to measure the lightning strike history of what is today called the I-4 Corridor, a region near Tampa and Orlando. They analyzed the properties of the fulgurites, paying particular attention to the length and circumference of the glass cylinders because the amount energy released is revealed by these dimensions.

“Everyone knows there is a lot of energy in a lightning bolt, but how much?” Pasek explained. “Ours is the first attempt at determining lightning energy distribution from fulgurites and is also the first data set to measure lightning’s energy delivery and its potential damage to a solid earth surface.”

According to Pasek, the energy released by lightning is measured in megajoules, also expressed as MJ/m.

“For example a single megajoule is equivalent to about 200 food calories, or the energy from leaving a microwave on for 20 minutes to cook food,” he explains. “It can also be compared to a 60 watt lightbulb’s energy use if left on for about four hours. It’s also the same as the kinetic energy a car has traveling about 60 mph.” Their research found that the energy produced by a lightning strike peaked at greater than 20MJ/m.

The researchers also found a way to separate the “normal” lightning strikes from the “abnormal.”

According to Pasek, a bolt of lightning can carry extremely high voltage and heat the air temperature around the strike to more 30,000 degrees Kelvin – that’s over 53,000 degrees Fahrenheit. When lightning strikes sand, soil, rock or clay, the current flows through the target and heats the material to above its vaporizing level. Rapid cooling produces the fulgurite.

According to Pasek, who is also an expert in astrobiology, geochemistry and cosmochemistry, lightning strikes the Earth about 45 times per second, with 75 to 90 percent of the strikes over land masses.

“About a quarter of these strikes occur from a cloud to the ground, so the fulgurite-forming potential is great, with up to 10 fulgurites formed per second globally,” said Pasek.

Their research serves not only to provide a way to measure the immense energy in lightning, but also to help raise awareness of the dangers posed by the potentially deadly bolts.