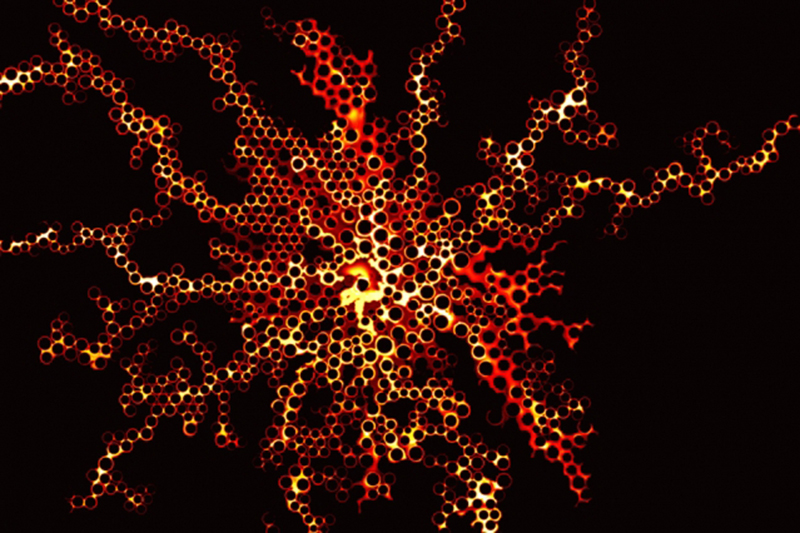 Lab simulations carried out by an MIT and Oxford University team provide detailed information about how a liquid moves through spaces in a porous material, revealing the key role of a characteristic called wettability. (Credit: Massachusetts Institute of Technology)

One of the most promising approaches to curbing the flow of human-made greenhouse gases into the atmosphere is to capture these gases at major sources, such as fossil-fuel-burning power plants, and then inject them into deep, water-saturated rocks where they can remain stably trapped for centuries or millennia.

This is just one example of fluid-fluid displacement in a porous material, which also applies to a wide variety of natural and industrial processes—for example, when rainwater penetrates into soil by displacing air, or when oil recovery is enhanced by displacing the oil with injected water.

Now, a new set of detailed lab experiments has provided fresh insight into the physics of this phenomenon, under an unprecedented range of conditions. These results should help researchers understand what happens when carbon dioxide flows through deep saltwater reservoirs, and could shed light on similar interactions such as those inside fuel cells being used to produce electricity without burning hydrocarbons.

The new findings are being published this week in the journal PNAS, in a paper by Ruben Juanes, MIT’s ARCO Associate Professor in Energy Studies; Benzhong Zhao, an MIT graduate student; and Chris MacMinn, an associate professor at Oxford University.

A key factor in determining displacement efficiency, Juanes says, is a characteristic called wettability. Wettability is a material property that measures a preference by the solid to be in contact with one of the fluids more than the other. The team found that the stronger the preference for the injected fluid, the more effective the displacement of the pre-existing fluid from the pores of the material—up to a point. But if the preference for the injected fluid increases beyond that optimal point, the trend reverses, and the displacement becomes much less efficient. The discovery of the existence of this ideal degree of wettability is one of the significant findings of the new research.

The work was partly motivated by recent advances in scanning techniques that make it possible to “directly characterize the wettability of real reservoir rocks under in-situ conditions,” says Zhao. But just being able to characterize the wettability was not sufficient, he explains. The key question was “Do we understand the physics of fluid-fluid displacement in a porous medium under different wettability conditions?” And now, after their detailed analysis, “We do have a fundamental understanding” of the process, Zhao says. MacMinn adds that “it comes from the design of a novel system that really allowed us to look in detail at what is happening at the pore scale, and in three dimensions.”

In order to clearly define the physics behind these flows, the researchers did a series of lab experiments in which they used different porous materials with a wide range of wetting characteristics, and studied how the flows varied.

In natural environments such as aquifers or oil reservoirs, the wettability of the material is predetermined. But even so, Juanes says, “there are ways you can modify the wettability in the field,” such as by adding specific chemical compounds like surfactants (similar to soap) to the injected fluid.

By making it possible to understand just what degree of wettability is desirable for a particular situation, the new findings “in principle, could be very advantageous” for designing carbon sequestration or enhanced oil recovery schemes for a specific geological setting.

The same principles apply to some polymer electrolyte fuel cells, where water vapor condenses at the fuel cell‘s cathode and has to migrate through a porous membrane. Depending on the exact mix of gas and liquid, these flows can be detrimental to the performance of the fuel cell, so controlling and predicting the way these flows work can be important in designing such cells.

In addition, the same process of liquid and gas interacting in pore spaces also applies to the way freshwater aquifers get recharged by rainfall, as the water percolates into the ground and displaces air in the soil. A better understanding of this process could be important for management of ever-scarcer water resources, the team says.

“This is a very interesting study of pore-scale multiphase fluid flow in two-dimensional micromodels,” says David Weitz, a professor of physics and applied physics at Harvard University, who was not involved in this work. “The advantage of this work is that the authors look in more detail at the mechanisms of wetting and displacement of the fluid in the pores,” he says. “This is a very important aspect of fluid flow in porous media.”