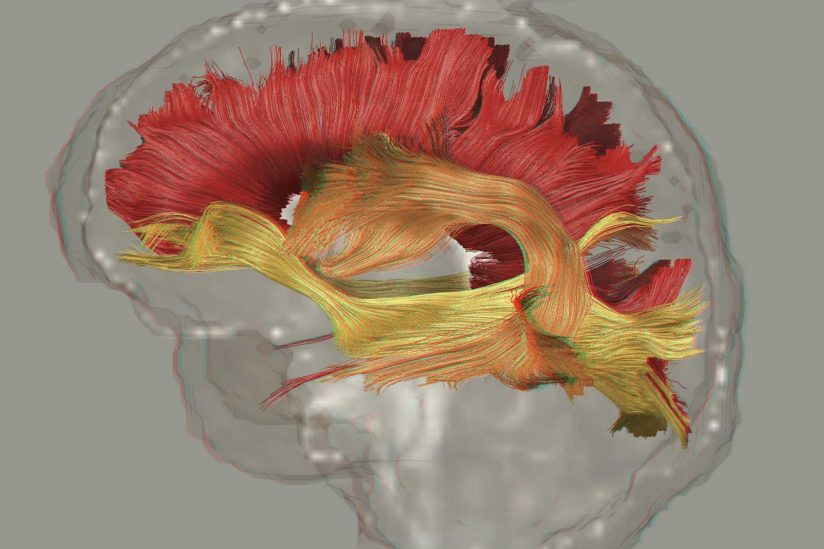 Fiber pathways in the brain are altered in schizophrenia, a mental illness in which patients may experience hallucinations, psychosis and depression. (Courtesy of Paul Thompson, Neda Jahanshad and Conor Corbin, USC Laboratory of Neuro Imaging, USC Mark and Mary Stevens Neuroimaging and Informatics Institute)

Some 40 years since CT scans first revealed abnormalities in the brains of schizophrenia patients, international scientists say the disorder is a systemic disruption to the brain’s entire communication system.

The study, published in the Nature journal Molecular Psychiatry on Oct. 17, sets the stage for future research on the debilitating mental illness that, according to the World Health Organization, affects more than 21 million people worldwide.

It is the largest analysis of “white matter” (fatty brain tissue enabling neurons to talk to each other) differences in a psychiatric disorder to date and was made possible by a federal grant to the Keck School of Medicine of USC. The study displaces a theory that schizophrenia manifests due to wiring problems in only the prefrontal and temporal lobes. These front-facing areas of the brain are responsible for personality, decision-making and hearing perception.

The issue is that frayed “Ethernet cords” are present everywhere, according to Sinead Kelly, co-lead author of the study.

“We can definitively say for the first time that schizophrenia is a disorder where white matter wiring is frayed throughout the brain,” said Kelly, a researcher at the USC Mark and Mary Stevens Neuroimaging and Informatics Institute at the Keck School of Medicine when the study was conducted.

Keck School of Medicine is one of the world leaders in studying brain diseases. It is the hub of several large-scale global research efforts in psychiatry, neurology and genetics.

“Our study will help improve the understanding of the mechanisms behind schizophrenia, a mental illness that — left untreated — often leads to unemployment, homelessness, substance abuse and even suicide,” said Kelly, who is now is a postdoctoral research fellow at the Harvard Medical School. “These findings could lead to the identification of biomarkers that enable researchers to test patients’ response to schizophrenia treatment.”

An estimated 26 percent of homeless adults staying in shelter homes in America live with a serious mental illness such as schizophrenia, according to the U.S. Department of Housing and Urban Development.

Although the researchers found that frayed communication cords were present throughout the brains of people with schizophrenia, the poorly insulated wiring was most evident in the corpus callosum, which allows for communication between the brain hemispheres and in the frontal portion of the corona radiata, a key structure for information processing.

Schizophrenia has a biological effect on the entire brain

Current medical treatment for schizophrenia addresses only symptoms because the causes of the disease are still unknown. Many patients are asked to take antipsychotic drugs for the rest of their lives. Some individuals experience side effects such as significant weight gain, tremors, emotional numbing or extreme drowsiness.

Previous studies did not always point to the same brain regions. Scientists need to come to a consensus before they can begin looking for answers. To do that, they need to aggregate and analyze global brain scan data, said Neda Jahanshad, co-lead author of the study and assistant professor of neurology at the Imaging Genetics Center within the USC Stevens Neuroimaging and Informatics Institute.

“We’re showing that just studying a single brain region to try to find out what causes schizophrenia is not a good approach. The effect is global. Focusing on a certain part of the brain where you think that effect will be is not going to give you the whole story.”

The big data project was integrated from 29 different international studies by the ENIGMA (Enhancing Neuro Imaging Genetics through Meta Analysis) network, a global consortium headed by Paul Thompson at the Keck School of Medicine.

The researchers examined data from diffusion tensor imaging, a form of MRI that measures the movement of water molecules in the white matter of the brain. These scans allow scientists to locate problem areas in the brain’s normally insulated communication system.

The study paves the path for more focused scientific inquiry. A next step could be to seek what causes these abnormalities in white matter. Schizophrenia is partly hereditary, so perhaps specific genes promote the disorder via slight alterations in brain wiring, Kelly said.

USC has researchers across disciplines seeking to prevent or treat neurological and psychiatric disorders such as schizophrenia, Alzheimer’s disease and epilepsy.